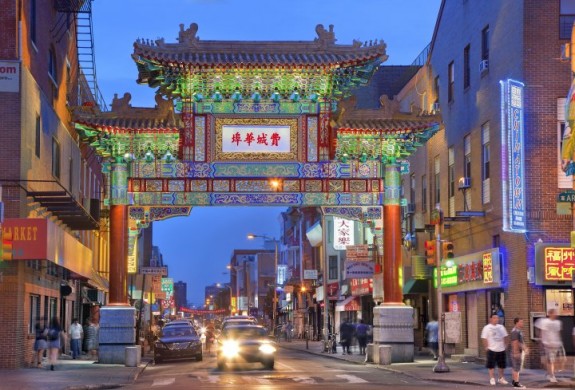 The Friendship Gate, produced by artisans in Chinatown’s “sister city” of Tianijn, China in 1983, was installed at the intersection of Tenth and Arch Street in 1984. The gate provides a distinctive anchor for Philadelphia’s Chinatown, which has evolved since the nineteenth century to become a cultural and business center for multiple Asian immigrant groups. Chinatown’s borders have been redefined and reduced by urban renewal and infrastructure projects such as the Ben Franklin Bridge, the Vine Street Expressway, Independence Mall Urban Renewal Area, and the Pennsylvania Convention Center. Residents of Chinatown protested each of these projects, which resulted in businesses and homes being razed and residents displaced. One successful protest in 1973 resulted in a redesign of the Vine Street Expressway, so that the construction would not destroy three additional city blocks and a church within Chinatown. Even with local protests, Chinatown has been reduced in size from twelve city blocks to seven city blocks over the twentieth century. To help preserve Chinatown, the Philadelphia Chinatown Development Corporation and other community organizations have developed affordable housing and streetscape projects to help preserve an ethnic residential neighborhood and cultural center.