College of Physicians of Philadelphia

One of the oldest professional medical societies in the United States, the College of Physicians of Philadelphia was founded in 1787 “to advance the science of medicine and to thereby lessen human misery.” At the time, Philadelphia, home to the first general hospital and medical college, was the center of American medicine. The College of Physicians of Philadelphia created professional standards and provided for the exchange of medical knowledge, while also establishing a renowned medical library and medical museum. 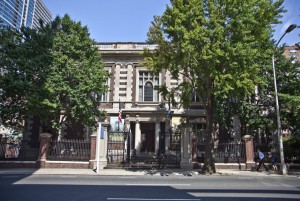 Edinburgh graduates Dr. John Morgan (1735–89) and Dr. William Shippen Jr. (1736–1808), together with Benjamin Rush (1735–1813), envisioned a society in Philadelphia like the Royal Colleges of Physicians of Edinburgh and of London, to regulate the medical profession and foster medical research and education. They sought to create a society that would give cohesion and prestige to the medical profession and serve the needs of the elite physician-professors of Philadelphia. Morgan, Shippen, Rush, and twenty-one other prominent Philadelphia physicians established the College of Physicians of Philadelphia in 1787 and elected their mentor, John Redman (1722–1808), its first president.

Fellows elected colleagues based on their contributions to American medicine and society. Notable fellows included famed surgeon Samuel D. Gross (1805–84) and the prominent American neurologist and writer Silas Weir Mitchell (1829–1914). The fellowship addressed challenges facing all Philadelphia physicians in the eighteenth and nineteenth centuries, particularly infectious diseases such as yellow fever, cholera, typhoid fever, and tuberculosis. During the yellow fever outbreak of 1793, the college participated in debates concerning the origin, spread, and treatment of the disease and recommended both quarantine and sanitary measures. It facilitated development of city health laws and creation of the Philadelphia Board of Health in 1794 to enforce these laws.

In its early years, the college rented rooms from the American Philosophical Society, which provided the space and means for fellows to review medical literature and learn from their colleagues. To this end, it developed an extensive library, a museum of medical specimens, lecture series, and meetings for the exchange of medical knowledge. Thanks to a large endowment by college fellow Thomas Dent Mütter (1811–59), the college built its first permanent home in 1863 at the corner of Thirteenth and Locust Streets. The activities of the college stalled during the Civil War, as one-third of its members volunteered for the war effort. After the war, membership and donations to the college increased. In addition to books and specimens, the college became well known for its collection of fine art and furniture. It soon outgrew this space and relocated to a larger, more opulent residence at Twenty-Second and Ludlow Streets in 1909. 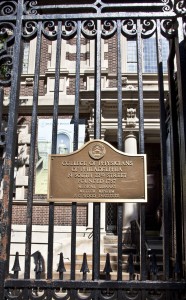 Fellows donated books from their personal collections to establish the library in 1788. The library grew with more such contributions as well as volumes written by members and purchases. In the later nineteenth century, the college appointed a professional librarian, and by 1900 it received over five hundred medical journals either by subscription or in exchange for the college’s publication, Transaction and Studies. By the 1970s, the library made available over three thousand current biomedical journal titles in dozens of languages. In this period, it served as a regional medical library and supported the needs of the area’s many medical schools and teaching hospitals. Its accumulation of books, journals, and manuscripts over more than two centuries produced one of the world’s most complete and treasured medical-historical libraries. It holds over four hundred incunables (books published before 1501), the great anatomical atlases beginning with Vesalius, as well as the texts, manuals, and periodicals used by practitioners for over four hundred years.

Medical museums were also an essential component of nineteenth-century medical education, and in its early years, the college developed an essential component of nineteenth-century medical education—a medical museum. After Thomas Dent Mütter resigned from his post at Jefferson Medical College in 1856, he donated his collection of anatomical and pathological specimens to the College of Physicians. Mütter’s endowment of $30,000 required the construction of a fireproof building to house his collection, which led to the building of its first permanent home in 1863 at the corner of Thirteenth and Locust Streets. The endowment also supported the hiring of museum staff and acquisition of specimens and artifacts well into the twentieth century. 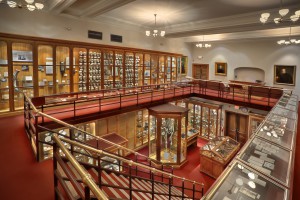 For much of the twentieth century, the College of Physicians of Philadelphia worked quietly in the realms of public health and the history of medicine. On its 150th birthday in 1937, the college celebrated by establishing the medicinal plant garden that co-founder Benjamin Rush had envisioned. In 1976, the college established the Francis Clark Wood Institute for the History of Medicine, “to promote the historical resources of the college’s library and museum.” The college became part of the Consortium for History of Science, Technology and Medicine, founded in 2007, and was established as a Historical Landmark in 2009, considered “an outstanding property in the medical and cultural history of the United States.” The Historical Medical Library of the College developed a Digital Library to share and make more accessible literature important in the history of medicine.

For the better part of two centuries, the College of Physicians of Philadelphia has served medical professionals and the public. As an authority on the history of medicine and public health issues, the college became a vital participant in the medical community of Philadelphia and a respected institution both nationally and internationally.

Amanda Bevers Bristol is a Ph.D. candidate in the History and Science Studies Departments at University of California, San Diego, where in 2012 she received her master’s. She is completing her dissertation entitled “To Bind Up the Nation’s Wounds: The Army Medical Museum and the Development of American Medical Science, 1862–1913,” which has been supported by grants from the Social Science Research Council and the Consortium for History of Science, Technology and Medicine.