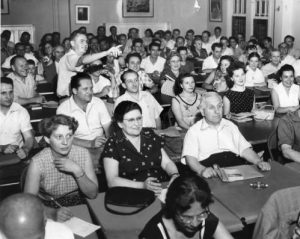 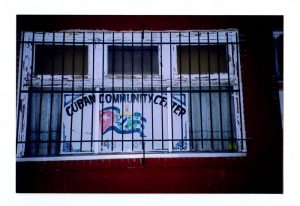 The hand-painted sign in this 2003 photograph welcomes visitors to a Cuban community center in the Olney neighborhood of Philadelphia. Some of the city’s Cuban residents arrived as part of a resettlement effort led by the Nationalities Service Center after the Cuban revolution. (Historical Society of Pennsylvania)[/caption]

The Institute’s name change to Nationalities Service Center in 1963 reflected a desire to differentiate itself from the International House, with which it was often confused, and signaled a broadening of the organization’s scope during the 1960s and 1970s to include services and engagement for non-immigrants. (The Institutes’ umbrella organization also changed its name, from the Institute for Immigrant Welfare to the American Council of Nationalities Service.) Beginning in the second half of the 1960s—pushed by the accomplishments of freedom and civil rights movements and a growing understanding of the intertwined dynamics of immigrant life and racial justice—the organization attempted to influence broader conversations about race, ethnicity, and cultural understanding. During the 1960s and 1970s, the Center sponsored conferences on subjects like bilingual education and affirmative action and held cultural workshops and training. It secured a grant in 1968 to fund the “Nationality Race Community Relations” project. Partly driven by concern about rising racism among ethnic whites in Philadelphia, the project produced a World Cultures curriculum taken by 63 black and white students from William Penn High School and John Hallahan Catholic Girls School. The project director, Jaipaul, and school officials later testified at Congressional hearings that led to the passage of the 1974 Ethnic Heritage Study Center Act. 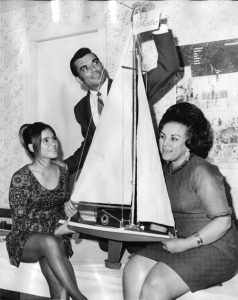 Andrew McNally received his Ph.D. from the University of Minnesota in 2017. His dissertation explored the history of the international understanding movement in U.S. education.