Horses played a critical role in Philadelphia’s growth and development as an industrial city, but over time their role as prime movers gradually diminished, and after the mid-twentieth century their role was primarily recreational. Although horses have become associated with the countryside or the American West, American cities had large, concentrated populations of horses well into the twentieth century, especially in the Northeast. A banker in nineteenth-century Philadelphia would have encountered more horses than a cowboy in Montana.

As elite animals, expensive to maintain, horses did not work in agriculture until the invention of the reaper and other mechanical devices in the nineteenth century. They were present but not plentiful in the colonial period. In Philadelphia, a compact preindustrial “walking city,” the wealthy used horses for riding, carriage travel, and sport. Most other people walked where they needed to go and hauled goods in handcarts and oxcarts. In the region, wagons drawn by horses and oxen brought agricultural products to Philadelphia’s port over rudimentary wagon roads. Completion of the Philadelphia-Lancaster turnpike (1795), the first paved long-distance road, dramatically increased traffic of Conestoga wagons drawn by “Conestoga horses” (a regional type of draft horse) and stagecoaches. 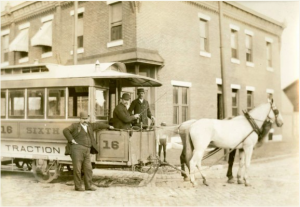 The horse-drawn streetcar was introduced in 1858 and operated in Philadelphia until around 1897, when electric trolley cars became a more reliable and less expensive alternative. (Library Company of Philadelphia)[/caption]

Industrialization intensified the use of horses for power. The period from the American Revolution to World War I might be called the golden age of horse power, in which horses became singularly important in moving goods and people. Commercial development, westward expansion, market access, and national security all drove the construction of transportation infrastructure in the form of roads, canals, and railroads. Each created the conditions for using more horses. A wave of turnpike building across the Northeast increased wagon and stagecoach traffic to Philadelphia, while local stagecoaches, called omnibuses, with regular routes and schedules, provided the first public transit system. This stimulated the wagon industry to produce stronger, lighter, more affordable vehicles that still further expanded horse use. A canal network connected Philadelphia to the anthracite coal region in northeast Pennsylvania, fueling its industrial growth as “the Workshop of the World” and strengthening its connection to the agricultural hinterland. Horses and mules (half-horses) pulled canal boats until late in the nineteenth century. On farms, horses pulled mechanical reapers, which helped to double agricultural production in the United States between the Civil War and the end of the nineteenth century and meet the food demands of growing urban populations of both humans and animals.

The expanding railroad network also caused a dramatic increase in the use of horses starting in the 1850s. Railroads increased the amount of freight, which then had to be transported to and from the depots. The fragmented railroad network also required transporting of people and goods from one railroad depot to the other. In addition, with steam engines initially banned from central Philadelphia due to danger from fire and explosions, horses pulled railroad cars from the city limits into downtown depots.

Railroads stimulated urban growth, but horses made the cities work, providing the circulation of people and goods within the city, and from the hinterlands to the city. Horse-drawn streetcars expanded Philadelphia’s residential area and suburbs, carrying 222 million passengers on 429 miles of track by the 1880s. Streetcar companies owned more than five thousand horses, which lived in large multistory stables akin to modern parking garages. Horse-drawn traffic—single-horse drays, huge multihorse wagons, carriages and cabs—filled the streets. Horses worked in construction, shipping, manufacturing, and shipping by hauling, excavating, and powering cranes, equipment, and capstans. The consolidation of Philadelphia city and county in 1854 created municipal departments for fire, streets, health, and sanitation, all using horses. By 1900, Philadelphia had four hundred horses per square mile, or nearly fifty thousand horses overall, including a small number of donkeys and mules. An 1872 epidemic of horse influenza, called “the Great Epizootic,” demonstrated the importance of horses by bringing Philadelphia to a complete halt for several days—a nineteenth-century version of a blackout.

Horses were urban residents and consumers as well as prime movers. They lived in small stables scattered around the city and suburbs as well as in the large stables of department stores, police and fire departments, and streetcar, railroad, and express companies. As consumers, they needed food, equipment, and services. Many businesses served horses’ needs, and the University of Pennsylvania founded its School of Veterinary Medicine in 1883 because of the presence of so many potential patients. Horses affected the urban environment by adding four to ten tons of manure and hundreds of gallons of urine to the streets each day, creating an issue for the growing public health movement. During the cholera epidemics of 1832, 1849, and 1866, officials focused on cleaning stables. In addition, city dwellers had the problem of removing several thousand horse carcasses a year, many left on the streets for days after horses died on the job. 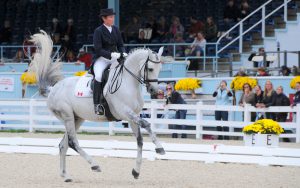 After the U.S. Civil War, horses became a sporting pastime for wealthy society. Here, a rider competes in September 2012 in the Fall Classic of the Devon Horse Show, which was founded in 1869. (Photograph by Donald D. Groff for The Encyclopedia of Greater Philadelphia)[/caption]

After the Civil War, horses gained a new role as equine recreation became an important pastime for members of a new, wealthy upper class who modeled themselves on British gentry. They rode, drove coaches and carriages in Fairmount Park, and went fox hunting and played polo, establishing such institutions as the Rose Tree Hunt Club in Media, Pennsylvania, in 1859 and the Devon Horse Show in 1896.  Although Pennsylvania banned horse racing for much of the nineteenth century and until 1959, prominent Philadelphians such John C. Craig, George D. Widener Jr. (1889-1971), George Elkins (1858-1919), and Samuel Riddle (1861-1951) (who owned Man O’War and War Admiral) bred racehorses and became prominent in the world of racing in New York and elsewhere. The upper classes supported the growing humane movement, closely linked to other reform movements of the era such as temperance, public health, and urban reform. The humane movement focused primarily on horses and founded such organizations as the Philadelphia Society for the Protection of Animals (1869) and its offshoot, the Philadelphia Fountain Society (1870). As expanding horse use made abuse more conspicuous, these reformers built water fountains for horses, monitored the treatment of work horses, and lobbied for limiting streetcar capacity and improving street pavements.

The Decline of Horse Use 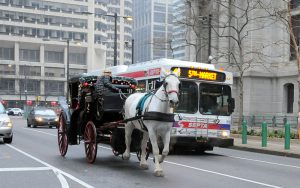 Twenty-first-century horses in Philadelphia adjust to challenges their colonial predecessors would be skittish about--like sharing the environs of City Hall with buses and other vehicles. (Photograph by Donald D. Groff for The Encyclopedia of Greater Philadelphia)[/caption]

Horse use began to decline in the early twentieth century. By 1900, streetcar electrification had eliminated most streetcar horses, which had made up a large part of the urban horse herd. The growing use of electric and internal combustion trucks and motorized equipment began to eliminate roles for urban horses. While automobiles were less important in replacing urban horses than trucks—few urban residents had owned private horses—automobiles changed the mindset of urban residents about the use of streets. City streets had traditionally been social spaces, but automobile drivers viewed them more as transportation routes and argued that horses should be banned as dangerous nuisances. Between 1910 and 1930 the horse population of the United States leveled off, but in cities it dropped by 50 percent.

Horses did not entirely disappear from Philadelphia in the twentieth century, but they came to occupy specialized niches. Milk delivery used horses for a long time because the horse memorized the route and moved the wagon from house to house as the milkman walked back and forth making deliveries. As late as the 1950s, individual vendors sold meat, produce, and other goods from horse-drawn wagons. The City of Philadelphia employed horses at the city dumps until the 1950s and continued to employ police horses in the twenty-first century. Horses also continued to work pulling carriages in the historic district around Independence Hall.

Outside the city, the Amish and some organic farmers continued to farm with horses.  The primary use of horses, however, remained recreational, for riding and driving. The counties of Pennsylvania and New Jersey surrounding Philadelphia, especially Chester County in Pennsylvania, became well known as horse country. The Devon Horse Show continued to be a premier event on the horse show circuit. Several horse stables remained within the city limits, including Chamounix Equestrian Center in Fairmount Park, where the “Work to Ride” program involved disadvantaged urban youth with horses and fielded a championship polo team.

In 2010, an automobile crashed into a horse carriage near Independence Hall, injuring two carriage drivers. Even though the driver of the car was at fault, the accident set off a debate about whether horses belonged in cities. Horses have been domesticated since about 3,500 BCE; since that time they have lived in and around humans, often in cities and towns. Whatever the future of horses in cities, their past is urban.

Ann Norton Greene is a historian of environmental and technological history in the History and Sociology of Science Department at the University of Pennsylvania, with expertise in animal history and energy history.  Her book, Horses at Work: Harnessing Power in Industrial America, analyzes the use of horses in creating modern industrial society in late nineteenth and early twentieth century America.