Dinosaurs and Paleontology (Study of Fossils and Prehistoric Life)

The Philadelphia area has played a major part in paleontology, the study of past life through fossils, yielding discoveries that have helped to illuminate millions of years of existence. In the early 1800s, Philadelphia became the birthplace of vertebrate paleontology, the study of ancient back-boned animals, and the Academy of Natural Sciences became a hub for paleontological work. The unearthing of the first nearly complete dinosaur skeleton in Haddonfield, New Jersey, in 1858, sparked interest in dinosaurs across North America. Since then, research and excavations conducted in New Jersey, Pennsylvania and Delaware, have continued to yield fossils and knowledge about ancient life. 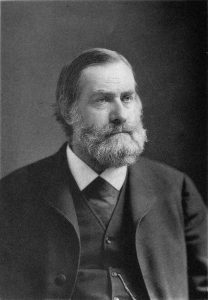 Fossil discovery has been more difficult in the Mid-Atlantic than in the western United States because of vegetation and less exposed sedimentary rock. Nevertheless, in 1838 a crew digging in Haddonfield for marl, which was used in fertilizer, also found fossils on the farm of John Estaugh Hopkins (1811-84). In 1858, Hopkins hosted William Parker Foulke (1816-65), a Philadelphia lawyer and supporter of scientific expeditions, who saw Hopkins’ specimens and came back to the area to find more that same year. Foulke along with Joseph Leidy (1823-91), a Philadelphia anatomist from the University of Pennsylvania and the Academy of Natural Sciences, unearthed and preserved the first almost-complete dinosaur skeleton found in the world. After the skeleton was constructed, Leidy named it Hadrosaurus foulkii, in honor of Foulke. The Hadrosaurus was a type of duck-billed dinosaur from the late Cretaceous period (97-65 million years ago). In 1868, the Hadrosaurus foulkii became the first dinosaur skeleton exhibited at the Academy of Natural Sciences, and on June 13, 1991, it became the official dinosaur for the State of New Jersey. 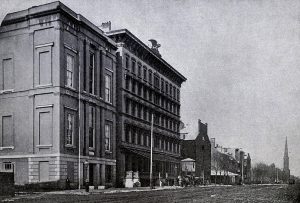 The Academy of Natural Sciences, shown here at its Broad and Sansom streets location (building at left, 1840-76), acted as a vital benefactor for the expansion of paleontology as a discipline. (Wikimedia Commons)[/caption]

American vertebrate paleontology originated in Philadelphia through the work of the American Philosophical Society (founded in 1743) and the Academy of Natural Sciences (founded in 1812). The Philosophical Society helped support the Meriwether Lewis (1774-1809) and William Clark (1770-1838) expedition to the west in 1804-6, which brought back one of the first fossils from the American West. At the academy, Leidy and Edward Drinker Cope (1840-97) helped to grow paleontology as a science as they worked to identify and describe the plethora of fossils found in western North America. Over time, Leidy and Cope identified dinosaurs and other fossils from all over North America. The academy’s fossil collections grew to include some of Cope’s collection, the fossil that Lewis and Clark discovered, the Thomas Jefferson (1743-1826) Fossil Collection, and the first dinosaur fossils found in North America. Identifications made by Cope and Leidy, among other early paleontologists, laid the foundational understanding of prehistoric life in North America.

Discoveries of dinosaur fossils continued in southern New Jersey and eastern Pennsylvania during the later nineteenth and early twentieth centuries. Not long after the Hadrosaurus find came the discovery of a fossil of the tyrannosaurid Dryptosaurus, a carnivore, in Barnsboro, New Jersey, in 1866. The rock formations known as the Newark Supergroup, running from southeast Pennsylvania through New Jersey and into Connecticut, also yielded discoveries. In 1905, Gilbert van Ingen (1869-1925) and William J. Sinclair (1877-1935) uncovered the oldest known tetrapod fossil from the Newark Supergroup in Bucks County, Pennsylvania. The fossil, Calamops paludosus, a large tetrapod amphibian, dated to the late Triassic period (235-208 million years ago) and was closely related to long-snouted trematosaurs found all over the world. Excavators also found another type of amphibian, the metoposaurs, in the Newark Supergroup, in central New Jersey, and in Chester and York Counties in Pennsylvania. 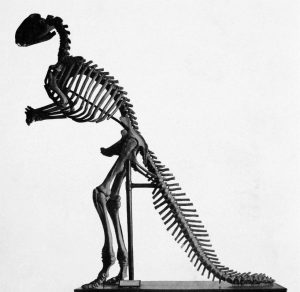 Hadrosaurus remains were first found in Haddonfield, New Jersey, in 1858. Since then, there have been statewide discoveries of the creature designated as New Jersey’s official state dinosaur. (Wikimedia Commons)[/caption]

Dinosaur fossils also emerged from the Inversand Company quarries of Sewell, New Jersey, including a duck-billed Hadrosaurus minor, found in 1947 and identified in 1948, and a fragment of a Hadrosaurus in 1957. Two skulls of Mosasaurus maximus were discovered at the site in 1961. Mosasaurus, a 40-foot aquatic reptile, was abundant in New Jersey. The Inversand pits yielded additional fragments of Hadrosaurus fossils in 1980, 1988, and 1991.

The 1980s yielded many dinosaur finds in New Jersey, Pennsylvania, Delaware and elsewhere on the East Coast due in part to groups like the Delaware Valley Paleontological Society (which began meeting in 1978) and the New Jersey State Museum (founded in 1895). In 1980, Robert K. Denton Jr. and Robert C. O’Neill found a site at Crosswicks Creek in Ellisdale, New Jersey, with fossils of bony fishes, lizards, turtles, crocodiles, mammals, and dinosaurs dating to the late Cretaceous period. A large rainstorm in March 1984 washed away enough layers of sediment for Denton and O’Neill to discover more than three hundred fossils, and more than ten thousand additional fossils uncovered thereafter included small fragments of bones from the duck-billed Hadrosaurus and Hypsibema and from the tyrannosaurid Dryptosaurus. Fragments of Deinosuchus, a giant crocodile, have also been uncovered. 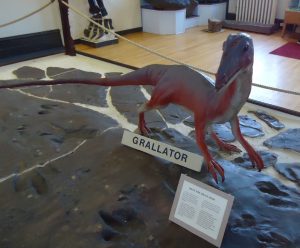 Construction work has helped to uncover many dinosaur species, such as the Grallator, a small three-toed, bipedal dinosaur. (Wikimedia Commons)[/caption]

Construction sites also produced discoveries of dinosaurs and other reptiles. On November 9, 1981, workers building the Limerick Nuclear Power Plant in Montgomery County, Pennsylvania, uncovered eighteen rock slabs bearing footprints from two species: the theropod dinosaur Grallator and Chirotherium, a Triassic archosaur that resembled a crocodile. Dredging of the Chesapeake and Delaware Canal in Delaware between 1982 and 1985 brought up many fossils, including hadrosaurids and ornithomimosaurs (theropods that resembled modern ostriches and emus) from the late Cretaceous period. In 1993, construction at the Graterford State Correctional Institution of Montgomery County yielded more than one hundred footprints left behind by the Triassic (245-208 million years ago) theropods Grallator and Atreipus. Some of the other footprints belonged to Rhynchosauroides and Gwyneddichnium, two Triassic archosaurs (related to modern birds and crocodiles).

The New Jersey State Museum conducted expeditions in the 1980s to other regions to help map and preserve dinosaur fossil sites. In two expeditions in 1986 and 1989, the museum conducted digs in Phoebus Landing, North Carolina. Fossils of the marine reptile Tylosaurus, the theropods Dryptosaurus and Ceolosaurus, the hadrosaurid Hypsibema, and the crocodilian Deinosuchus were discovered in the rock layers there. The museum, through the work of William B. Gallagher, also examined New Jersey’s K-T Boundary (Cretaceous-Tertiary Boundary), the rock layer marking the time when the dinosaurs were believed to have gone extinct. The investigation showed that the large dinosaurs in New Jersey, like the Dryptosaurus, had died out by the time the layer formed because no fossils were found above that line. The rock layer also documented that sea creatures, like ammonites, died out around the same time, which allowed other sea creatures, like nautilids, to expand and thrive. 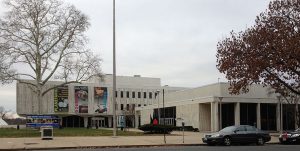 During the early twenty-first century, the Academy of Natural Sciences continued to play a national and international role in paleontology by leading paleontological exploration in the Catskill Formation in northern Pennsylvania and as far north as the Okse Bay Group found in the Nunavut Territory of Canada. The fossils in these areas dated to the late Devonian period (409-363 million years ago), long before dinosaurs. New fossil discoveries have yielded more clues about the evolution of early limbed animals (early tetrapods) from even earlier aquatic species. Many of these fossil specimens came to Philadelphia to be cleaned, curated, and studied. The Academy of Natural Sciences in Philadelphia and the New Jersey State Museum continued to collect fossils from all over the world. By the twenty-first century, the academy’s fossil collection exceeded twenty-two thousand specimens, and the New Jersey State Museum housed about 250,000, including three hundred that were some of the earliest discovered fossils from the Paleozoic and Mesozoic eras (542-65 million years ago). Skilled technicians called preparators, used dental tools, carbide needles, and weak acid to clear away the rock from fossils. Many of the fossils were examined through X-ray and CT scans, then casts were created, and the fossils were preserved for study.

Discovered fossils and fossil sites have played a role in public education as well as academic research. In 2012, the Jean and Ric Edelman Fossil Park at Rowan University in Sewell, New Jersey, opened to the public at the former Inversand Quarry and offered archaeological digs and paleontology programs. Fossils found there, dating to the Cretaceous Period (146-65 million years ago), included specimens of shelled creatures like brachiopods, marine snails, and sea turtles. Larger specimens included fossils from bony fish, marine crocodiles, and mosasaurs. Like Fossil Park, the Academy of Natural Science’s Dinosaur Hall offered visitors a paleontology experience with the opportunity to see thirty prehistoric species, including the tri-horned Chasmosaurus and the mighty Tyrannosaurus rex. The academy also created a “Big Dig” exhibit to allow young people to learn how to dig for fossils and a video with green screen that enabled visitors to place themselves in a virtual world of dinosaurs. At the New Jersey State Museum, exhibits like the Fossil Park and Academy educated visitors about specific dinosaur species like the marine reptile, Mosasaurus maximus.  The riches of museums such as the Academy of Natural Sciences and the New Jersey State Museum reflected the region’s significance as a center for paleontology and the public’s continuing fascination with dinosaurs and other prehistoric life.

Austin Wisser graduated with a Master of Arts in the Applied History Program from Shippensburg University of Pennsylvania and holds a bachelor’s degree in teaching seventh to twelfth-grade social studies from the same university. He is the author of “In Defense: One German-Language Newspaper’s Promotion of German-American Culture and Ideals During World War I,” published by the Lackawanna Historical Society. (Information current at date of publication.)