Mormons (The Church of Jesus Christ of Latter-day Saints)

Despite eras of suspicion and the relocation of many its members to the West during the nineteenth century, the Church of Jesus Christ of Latter-day Saints (also known as the LDS Church or Mormon Church) not only persisted in the Philadelphia region but also grew and spread, especially in the early twenty-first century. Strong evidence of such growth was the rise of a new temple in Center City Philadelphia in 2016, marking the culmination of work started in 1839 when missionaries first entered the city. 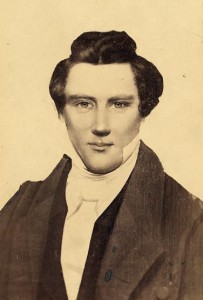 Mormon doctrine teaches that Joseph Smith Jr. founded the Church of Jesus Christ of Latter-day Saints after receiving a vision from God the Father and Jesus Christ, who told him not to join any church as they were all false and corrupt. (Library of Congress)[/caption]

The Church of Jesus Christ of Latter-day Saints is the official name for the church established on April 6, 1830, in Fayette, New York, by Joseph Smith Jr. (1805–44). In the midst of the Protestant revivalism that swept through the eastern United States during the late eighteenth and early nineteenth centuries, fourteen-year-old Smith retreated to a grove near his home in Palmyra, New York, and prayed to know which church he should join. Smith claimed to have received a vision of God the Father and Jesus Christ and was directed not to join any church as they were all false and corrupt. In due time, Smith formed his own religion, one that elicited both widespread curiosity and ridicule for its unorthodox beliefs regarding the nature of the Godhead, the necessity for and source of priesthood authority, the interpretation of spiritual prophecies, continuing revelation, and new scriptures like the Book of Mormon (1830) and Doctrine and Covenants (1835). The LDS Church, Smith maintained, was the restored personification of Jesus Christ’s original church, and the sole custodian of its doctrine and authority.

Although many of the events that led to establishing the LDS Church transpired in New York State, Pennsylvania played a smaller, yet significant, role as the site of many important events in the growth and development of the early LDS Church and for Smith, its founder. For example, in and around Harmony, Susquehanna County, Pennsylvania, Smith met, courted, and married Emma Hale (1804–79); began work on translating the Book of Mormon; and claimed to have been visited by John the Baptist and later by the disciples Peter, James, and John. These events retained significance for members of the LDS Church, which purchased, restored, and memorialized many of these locations in Pennsylvania during the twentieth century.

Within a few weeks of establishing the LDS Church, Smith began sending missionaries into surrounding regions to share the gospel message and sell copies of the Book of Mormon. The first missionaries to Pennsylvania arrived as early as 1833, though their efforts were not especially fruitful. In August 1839, Benjamin F. Winchester (1817–1901), a twenty-two-year-old native of Lindy’s Lane, Erie County, Pennsylvania, became the first LDS missionary assigned to preach in the Philadelphia area. Winchester had previously experienced remarkable success preaching in New York, Delaware, Maryland, and especially near Toms River, New Jersey, where he established a small congregation of believers. On December 23, 1839, just a few months after Winchester’s arrival in Philadelphia, Joseph Smith visited the city and officially established the Philadelphia Branch on the northeast corner of Seventh and Callowhill Streets. During their visit to the region, Smith and several other LDS leaders engaged with the local community, preaching to about 3,000 people at the First Independent Church of Christ at 412 Lombard and to a large congregation at the West Nantmeal Seminary in Chester County. On account of these and other proselyting efforts, church membership in the area surged. Over the coming years, congregations were established throughout the greater Philadelphia region, including in Brandywine, Georgetown, Straughsburg, New Holland, and Octorara, Pennsylvania; in Centerville, Wilmington, and Christiana, Delaware; and in Burlington, Recklesstown, Mount Holly, and Hornestown, New Jersey.

Despite the early success and rapid growth in membership, Mormons in Philadelphia were beset with challenges. After the LDS Church moved its headquarters from Missouri to Nauvoo, Illinois, in 1839, many faithful Philadelphian converts responded to Smith’s invitation to join with the main body of Saints, leaving behind the poor and indecisive. Those who remained found their religious beliefs and practices the frequent target of mockery and hostility in local newspapers, as many locals found the church’s claims of continuing revelation and additional scripture heretical and a threat to mainstream Protestant Christianity. Unable to get his own rebuttals published, Philadelphia leader Benjamin Winchester decided to publish his own local newspaper, the short-lived Gospel Reflector (1841), the first independent Mormon periodical, which carried pieces that countered misinformation and misperceptions of the church, its members, and its beliefs.

When Joseph Smith and his brother Hyrum were killed by a mob in an Illinois jail in 1844, the Philadelphia Branch rapidly fell into a state of disharmony and splintered. Small pockets of the congregation threw their support to the claims of those men who hoped to succeed Smith as leader of the church. Gradually, LDS membership in and around the Philadelphia area dwindled and activity slowed. In April 1849, seventy of the two hundred remaining members of the Philadelphia Branch left Philadelphia for Council Bluffs, Iowa, to join with the main body of Latter-day Saints as they fled the violence and persecutions of Illinois in search of a new home along the shores of the Great Salt Lake. 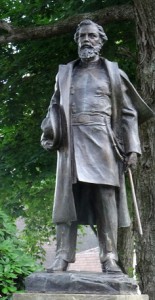 Thomas L. Kane, a prominent lawyer, abolitionist, and a general in the Union Army during the Civil War, aided the growth of the LDS Church in Philadelphia. (Photograph by Donald D. Groff for the Encyclopedia of Greater Philadelphia)[/caption]

Then, in the 1850s, the LDS Church experienced a surge in membership in the Philadelphia region. Some of this growth was due to the efforts of Thomas L. Kane (1822–83), a Philadelphia lawyer, abolitionist, later a brevet major general in the Union Army, and a life-long friend of Brigham Young (1801–77) and the Latter-day Saints, who addressed the Historical Society of Pennsylvania on March 25, 1850, to clear up widespread misconceptions about the Mormons. However, most of the increase in membership came from the LDS Church’s missionary efforts in Europe and the use of Philadelphia as the port of entry for Latter-day Saints emigrating from Europe beginning in 1855. Upon arriving, many LDS immigrants found work locally until they were able to pay for transportation to join the other Latter-day Saints in the Utah Territory.

The 1856 Republican National Convention, held at the Musical Fund Hall in Philadelphia, sparked a new wave of national anti-Mormon rhetoric and legislation when the party established its platform upon the need to prohibit the so-called “twin relics of barbarism”: polygamy and slavery. When, a few years later, President James Buchanan (1791–1868) sent General Albert Sidney Johnston (1803–62) and 2,500 troops to ensure Brigham Young stepped down as governor of the Utah Territory in what became known as the Utah War (1857–58), Young interpreted the actions as a military invasion, declared martial law, and ordered all Latter-day Saints to return to Salt Lake City immediately. The move forced the Eastern States Mission, which provided leadership and missionaries to the Philadelphia Branch and the surrounding region, to close. Those Latter-day Saints who remained in the Philadelphia area lost contact with the church’s leadership and their activity in the church declined. 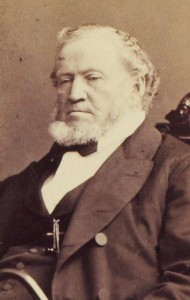 The second head of the Mormon Church, Brigham Young was a prominent figure in moving the church to Utah. (Library Company of Philadelphia)[/caption]

On the heels of the Utah War, the Civil War slowed Latter-day Saints’ immigration to the states and preventing the LDS Church from having much interaction with the East. Furthermore, the federal government passed increasingly punitive legislation during the 1860s and 1870s aimed at curbing the Mormon practice of polygamy. These laws decimated the financial holdings of the LDS Church and made many of its leaders federal fugitives. Despite these challenges, the LDS Church decided to expand the missionary efforts domestically and internationally. After the war, the LDS Church tried to revive the fledgling Philadelphia Branch but had little success. The church in the Philadelphia area gradually grew over the following decades, and the Philadelphia Branch was officially reorganized on June 15, 1881.

Shortly after abandoning the religious practice of polygamy in 1890 and as part of their efforts to accommodate the political, economic, and cultural demands of the country, the LDS Church sent out emissaries to establish common ground with Progressive America. To Philadelphia, the church sent Elder Brigham Henry (B. H.) Roberts (1857–1933), a well-established leader and one of the finest orators in the church; Melvin J. Ballard (1873–1939), a young, newlywed missionary; and a quartet selected from the Mormon Tabernacle Choir. The church hoped their efforts would sway public opinion and energize the proselytizing efforts in the area. 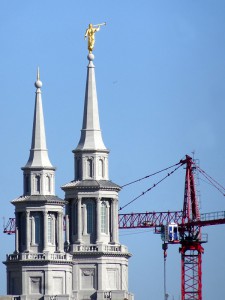 Located on the northeast corner of Eighteenth and Vine Streets, across from the Cathedral Basilica of Sts. Peter and Paul, the granite temple, the first in Philadelphia, is 68,000 square feet in size. (Photograph by Donald D. Groff for the Encyclopedia of Greater Philadelphia)[/caption]

The LDS Church continued to grow in the Philadelphia region over the following decades. These years were marked by firsts: the church built its first chapel in Philadelphia in 1938 at 315 S. Forty-Sixth Street (as of 2016 owned and operating as the Good Shepard Community Church); the Mormon Tabernacle Choir first performed in Philadelphia in 1954; and the first stake (similar to a Catholic diocese) was established in 1960. The church also made major inroads into Philadelphia communities by maintaining a strong genealogical outreach presence with ten Family History Centers located in the region. On October 4, 2008, President Thomas S. Monson (b. 1927) announced plans to build a temple in Philadelphia, the first of its kind in Pennsylvania. Temples, according to Mormon beliefs, are the most holy of places to worship and the place where Mormons make sacred covenants with God. The 68,000-square-foot granite structure at the northeast corner of Eighteenth and Vine Streets, across from the Cathedral Basilica of Saints Peter and Paul and diagonal to Logan Square, was scheduled to open in 2016. The plan for the Mormon complex also included a thirty-two-story residential tower and meeting house with a family history center. As of 2015, with about 25,000 members and forty-seven meeting houses, the Church of Jesus Christ of Latter-day Saints had established a strong and historically significant presence in the Greater Philadelphia area.

Brant W. Ellsworth earned a Ph.D. in American Studies from Penn State, Harrisburg, and is an instructor of American History and Political Science at York College of Pennsylvania. He recently published a chapter examining Mormon soldier enlistment motivation during the Civil War in Ken Alford, ed., Civil War Saints.