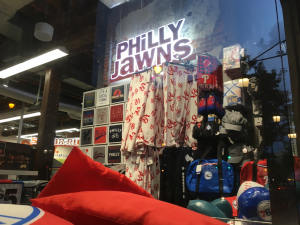 A “Philly Jawns” sign identifies Philadelphia-themed products at a Five Below store on Market Street. (Encyclopedia of Greater Philadelphia photograph)[/caption]

African American English speakers in Philadelphia adapted joint and created the new word jawn. The phonetic evolution from joint into jawn resulted from a tendency in African American Vernacular English (AAVE) to remove the final consonant of a word, and replace labial, dental, and velar stops (the p’s, t’s, and k’s) with glottal stops (the -aw or -uh sound made in the throat when pronouncing jawn). When pronouncing the parent word “joint” the larynx produces the sounds: “j – aw – ih – n – t.” AAVE changes this into jawn by emphasizing the glottal ah sound, omitting the ee vowel, and dropping the end consonant t, leaving the sounds j – ah - n. In essence, Philadelphia created the pronunciation of the word, but its meaning already existed. 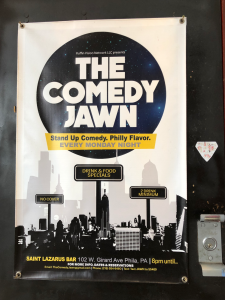 A poster advertising a local “Comedy Jawn” reflects the prevalence of the word among Philadelphians. (Encyclopedia of Greater Philadelphia photograph)[/caption]