Garment work was once one of Philadelphia’s largest industries. Clothing and textiles (a category including hosiery, a Philadelphia specialty) employed more than 40 percent of the city’s paid workforce by 1880. Starting in the first third of the nineteenth century, the garment industry became a center of labor activism, experiencing periodic strikes and union organizing drives until it began to decline in the mid-twentieth century. Although the structure of Philadelphia’s garment industry, which consisted mostly of small shops financed largely by cash on hand, provided flexibility, a reluctance to use credit also meant that deindustrialization hit the city’s garment industry harder than the same sector elsewhere in the nation.

Before the Civil War, women working for their families or as seamstresses and journeymen tailors working under master artisans made Philadelphia’s clothing. Though work as a journeyman could be a route to self-employment, master artisans’ reluctance to increase wages or heed labor agreements often led to conflict. In 1827, a group of journeymen tailors formed a protective association, the Tailors’ Benevolent Society, and convinced their employers to agree to standardized prices and a closed shop. 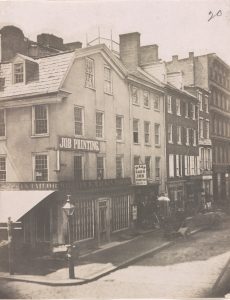 Despite this agreement, five journeymen at Robb and Winebrener (Third and Chestnut Streets) discovered later that year that they had been paid less than the agreed-upon prices for women’s riding outfits. When they argued with their employer, they were fired. Over the course of the next week, fourteen other journeymen in the shop walked out over the firings. Strikers surrounded the shop, discouraging potential replacement employees from breaking the strike. The Commonwealth of Pennsylvania took the men to court on the owners’ behalf, accusing them of conspiring to get unfairly high wages and of attacking strikebreakers. The court, however, largely sided with the journeymen; they had not threatened strikebreakers, their employers, or others and could not be convicted of conspiring to extort higher wages. The court did find the journeymen guilty of conspiring to reinstate their colleagues, but even this charge it later dropped. Members of the Tailors’ Benevolent Society won wage increases from their employers again in 1844 and 1847.

Influences of Technology and Immigration 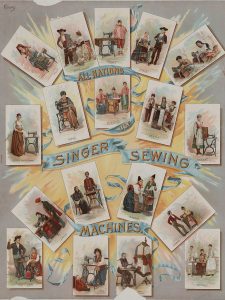 This 1892 advertisement for Singer sewing machines depicts a series of images of peoples of different nationalities using treadle machines. (Library of Congress)[/caption]

Such developments did not take place evenly across the nation, and the garment industry in Philadelphia developed differently from the large textile mills in Lowell, Massachusetts, or Newark or Paterson, New Jersey. Most strikingly, garment shops in Philadelphia remained small. Manufacturers were loath to take on debt to expand their operations, preferring to pay with cash on hand. Additionally, due both to the kinds of work available and an aging port infrastructure, Philadelphia did not receive the same numbers of immigrants as New York City or other parts of Pennsylvania, including the coal and steel areas. The result was a decentralized industry scattered across small shops, tenement-based production, and outwork (contractors, often women and children, paid by the piece for work completed in their own homes). In both 1850 and 1900, shops tended to employ no more than twenty-five people.

The decentralized nature of Philadelphia’s garment industry posed challenges. Manufacturers resisted credit, making expansion difficult and keeping the number of employees in each shop small; labor organizers found it difficult to organize a scattered workforce. Employment could also be cyclical. Large manufacturers such as Morris Haber (1874–?) outsourced excess orders to smaller firms that kept workers on only when they had orders to fulfill and let them go during slack periods. Such periodic unemployment could be particularly devastating for outworkers and other contractors.

A Boost from the Civil War

This arrangement also had benefits, however: Philadelphia garment shops were more nimble and could change direction more quickly than mass-production shops elsewhere, which often kept large amounts of stock on hand. With the onset of the Civil War, for example, the government urgently needed uniforms, and Philadelphia firms were well-positioned to secure lucrative contracts to produce them. 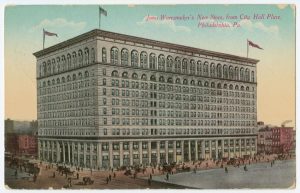 John Wanamaker’s department store, depicted in this c. 1910 postcard, sold ready-to-wear clothing produced by its own employees and other Philadelphia firms. (Library Company of Philadelphia)[/caption]

After the Civil War, firms that had mobilized to produce uniforms found ready buyers in the new ready-to-wear market. Justus Clayton Strawbridge (1838–1911) and Isaac Hallowell Clothier (1837–1921) founded Strawbridge and Clothier, and John Wanamaker (1838–1922) opened his own department store. Firms that had built up capacity during the war and grown accustomed to high levels of production were prepared to fill these retailers’ bulk clothing orders. Changing fashions meant that retailers regularly placed new orders, a boon for the garment industry. In 1882, Old City alone hosted almost seventeen thousand clothier employees (many in outwork). Many of Wanamaker’s 2,485 employees worked in garment manufacturing. At the same time, smaller firms, such as men’s suiting shop Jacob Reed’s Sons, continued to supply high-quality made-to-order clothing. 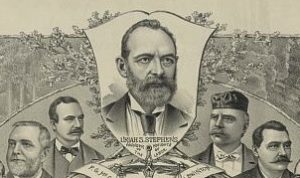 Uriah Stephens founded the Knights of Labor, the first national industrial union in the United States, in Philadelphia in December 1869. He is honored in this 1886 Kurz & Allison lithograph. (Library of Congress)[/caption]

Though large corporations did not dominate the economic landscape of Gilded Age Philadelphia to the same extent as they did elsewhere, the city was not exempt from the labor strife experienced across the nation. As tensions grew among skilled workers, unskilled workers, and owners, new organizations formed to represent the interests of each. The most skilled of factory clothing workers were the garment cutters, and in 1869, Philadelphia garment cutter Uriah Stephens (1821–82) formed the Knights of Labor (KOL), an organization to represent the interests of all working people. At its peak, the Knights had seven hundred thousand members. The KOL’s inclusivity made it unwieldy, and it could not escape associations with radicalism after Chicago’s deadly Haymarket riot in 1886. Founded that same year by former Knights, the American Federation of Labor organized skilled workers along craft lines. The United Garment Workers of America received an AFL charter in 1891, though the new garment workers union only included skilled workers, excluding most garment workers. The two most important organizations representing the interests of less-skilled workers, the International Ladies Garment Workers Union (ILGWU) and the Amalgamated Clothing Workers of America, organized in 1900 and 1914, respectively. 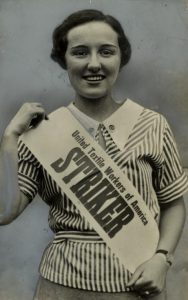 A Philadelphia secretary for the United Textile Workers of America, photographed by the Philadelphia Record in 1934, displays a sash to be worn by local textile workers who joined a widespread strike that originated in mills in the South. (Historical Society of Pennsylvania)[/caption]

Although New York City was the center of garment worker activism, developments there could not help but affect Philadelphia workers. In late 1909, thousands of New York City garment workers—many of them young, Jewish, immigrant women from southern and eastern Europe—walked out of their jobs. The strike spread to Philadelphia after the ILGWU learned that many New York City firms were sending their work there. Strikers in both cities eventually won many of their demands. In Philadelphia these included a fifty-four-hour week, higher wages, and an end to the practice of charging for work materials. They did not, however, win a closed shop, in which employers recognize the union as sole bargaining agent for all employees.

Philadelphia garment workers demographically resembled their New York City counterparts. Jewish Philadelphians predominated in the early twentieth-century garment industry, both as factory owners and employees. Factory owners tended to be German-Jewish, while their employees were largely Russian-Jewish. Concentrated in South Philadelphia, garment workers often lived close to their workplaces. In 1909, 85 percent of Philadelphia shirtwaist (a woman’s garment resembling a man’s shirt) makers were female, and 85 percent were Jewish. A handful of Italians also worked in the garment industry. As in other industries, however, African Americans first gained access to the garment industry, including in 1909–10 and again in 1921, as strikebreakers. For this group, the expanded production of World Wars I and II brought about longer-term, though not permanent, opportunities.

In the interwar era, anti-union firms such as Philadelphia’s A.B. Kirschenbaum tried to lure workers away from unions with corporate welfare —employer-dominated company unions and other benefits meant to encourage loyalty to the company and discourage independent organizing. Union strength continued to grow, however, and a 1933 general dress-industry strike forced Philadelphia employers to recognize the ILGWU. The labor-friendly legislation of the New Deal helped consolidate these gains, though not consistently. A 1934 Pennsylvania Department of Labor and Industry survey of garment workers in Allentown, Doylestown, Philadelphia, and Shamokin found National Recovery Act regulations laxly and sporadically enforced. 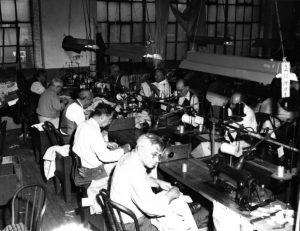 Deindustrialization affected the Philadelphia garment industry as early as the 1920s. In search of cheaper labor, employers increasingly turned to “runaway shops”—firms that relocated to areas where unions were weaker—setting up factories in parts of New Jersey, Pennsylvania (including its anthracite region), and the South. Though New York City firms were the first to deploy this strategy, the ILGWU reported that Philadelphia firms also began to do so by the 1930s. The development of synthetics also posed challenges; many firms that produced silk hosiery, for example, could not afford to convert to nylon and closed. Post–World War II labor militancy further encouraged Philadelphia manufacturers to relocate. By the 1960s, the industry also faced international competition. Nationally, imports made up only 3 percent of the garment industry in 1955, but up to 88 percent in 2000. Sectors of the industry that had long relied more on machine technology, including knitwear and menswear, were able to stave off this competition for longer, but even these areas declined precipitously by the 1970s. In Philadelphia, the garment industry alone lost ninety-one thousand jobs between 1947 and 1986—79 percent of the city’s total manufacturing job losses in those years.

Philadelphia garment work bore many similarities to the industry elsewhere, especially New York City. In both places, the industry grew to employ large numbers of young, immigrant women who worked for low pay and long hours under sometimes dangerous conditions. The Philadelphia garment industry was not simply a smaller version of New York’s, however. The city had its own demographic, economic, and geographic factors that influenced the shape and development of this sector. Employers were more likely to be risk-averse, and employment was scattered across factories, shops, and homes. The decentralized nature of the industry gave employers flexibility but could mean insecurity for employees. Unions also had difficulty organizing such a diffuse workforce. Ultimately, however, both the large factories of other cities and Philadelphia’s smaller shops and factories faced the same fate. They could not compete with overseas manufacturing, and the industry declined.

Christina Larocco is editor of the Pennsylvania Magazine of History and Biography and scholarly programs manager at the Historical Society of Pennsylvania.