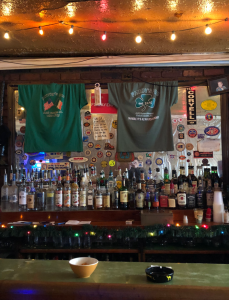 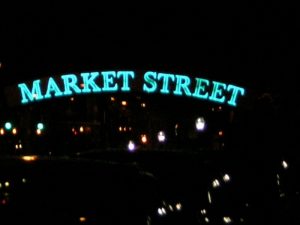 Many popular landmarks, including the illuminated Market Street sign are featured in the opening credits for It’s Always Sunny in Philadelphia. (Wikimedia Commons)[/caption]

The opening credits of It’s Always Sunny in Philadelphia, a compilation of scenes filmed from a car window, establish Philadelphia and the surrounding area as the primary setting for every episode. Shot by Day on a digital camera while he drove through Philadelphia one night, the opening credits feature the Benjamin Franklin Bridge, Penn's Landing, Lincoln Financial Field, Swann Memorial Fountain in Logan Circle, Boathouse Row, 30th Street Station, and South Street. In the life of the series, many other notable landmarks have been mentioned, including the Strawberry Mansion Bridge, Citizens Bank Park, Independence Hall, the Italian Market, the Historical Society of Pennsylvania, Penn State, Atlantic City, and the Jersey Shore.  The show’s characters are depicted as avid fans of the Phillies, Eagles, and Flyers.

Cody Schreck is a graduate student at the University of Wisconsin-Milwaukee pursuing a master’s degree in Public History, Museum Studies and Non-Profit Management. He also works as a Research Assistant for The Encyclopedia of Milwaukee.