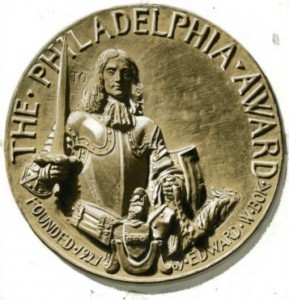 The Philadelphia Award medal depicts William Penn on this side and Jesus on the other, with the words, “I am among you as he that serveth.” It was designed by Philadelphia artist Violet Oakley. (Historical Society of Pennsylvania)[/caption]

Founded in 1921, each year the Philadelphia Award honors one or more Philadelphians for service “to advance the best and largest interests of Philadelphia.” Awardees have included scientists, educators, university administrators, directors of nonprofits, philanthropists, ministers, lawyers, politicians, artists, writers, and sports figures. Established by Edward Bok (1863–1930), retired editor of the Ladies Home Journal, the award reflects Bok’s belief that “service to others tends to make lives happy and communities prosperous and that the ideal of service as a test of good citizenship should be kept constantly before the minds of the people of Philadelphia in general and the young in particular.”

Bok, who retired in 1919 at the age of fifty-six, believed that the last third of a successful man’s life should be dedicated to helping others. Retirement, he believed, allowed the mind to “rest, refresh, exhilarate,” and nothing better provided that state of mind than public service. While a strong believer in free enterprise and upward mobility—Bok rose from poor immigrant to successful businessman—he knew that individual economic success alone did not solve society’s problems or provide true self-fulfillment. 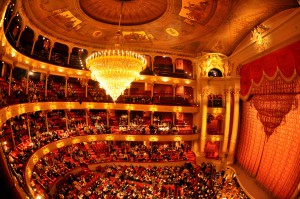 From 1921 to 1950 the Philadelphia Award ceremony was held at the Academy of Music. (Photo by B. Krist for Visit Philadelphia)[/caption]

Convinced that publicizing and rewarding do-gooders would encourage more people to do good, Bok established the Philadelphia Award, a $10,000 (later $25,000) annual prize. He appointed nine trustees who would select the awardees. The event took place at the Academy of Music until 1950; the one exception was the smaller gathering in 1930 at the Barclay Hotel that was also a memorial for Edward Bok. After 1950 the award ceremony often occurred at the Barclay Hotel. The event included a speaker, who focused on a topic that, however tenuously, related to the admirable work of the awardee. The speaker then introduced the winner of the award (kept secret prior to the ceremony until 1964), who was presented with an embossed scroll, ivory casket, gold medal designed by renowned artist Violet Oakley (1874–1961), and the check. 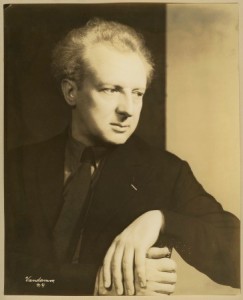 The first winner of the Philadelphia Award, in 1921, was Leopold Stokowski (1882–1977), who as conductor transformed the Philadelphia Orchestra from one widely regarded as staid and mediocre to an orchestra considered exciting and innovative. The trustees presented an award every year except 1941, when U.S. entrance into World War II made it seem inappropriate, and 1948, when the trustees could not agree on an awardee. In 1931, in the depth of the Great Depression, Bok’s son, W. Curtis Bok (1897–1962), presented the award to the “Unknown Citizen,” whose “part in the life of Philadelphia is both great and small; he is our neighbor and the stranger we do not know. . . . He is the man who carries on—in a word, he is the common man.”

Recipients of the award have included such outstanding members of the Philadelphia community as Eugene Ormandy (1899–1985; 1965 award), the brilliant conductor who, along with Stokowski, established the Philadelphia Orchestra as among the finest orchestras in the world. Eli Kirk Price II (1860–1933; 1928) and Fiske Kimball (1888–1955; 1950) were instrumental in not only establishing a public art museum, the Philadelphia Museum of Art, but also making it into one of the world’s greatest. Samuel Fleisher (1871–1944; 1923) and Jane Golden (b. 1953; 1997) brought art to the masses with the Graphic Sketch Club (later the Fleisher Art Memorial) and the Philadelphia Mural Arts Program.

Marian Anderson (1897–1993; 1940) was the first African American award winner. A Philadelphian from a modest background, she triumphed to become one of the twentieth century’s greatest and most popular classical singers. Joan Myers Brown (b. 1931; 2009) also broke through racial barriers. A professional dancer, Brown had encountered pervasive racial discrimination in Philadelphia’s dance community. In 1970 Brown cofounded Philadanco to provide opportunities for African American dancers and encourage them to achieve the highest standards. 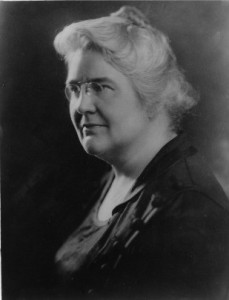 The first woman to win the award, Lucy Wilson (1864–1937; 1933), was a progressive educator who founded South Philadelphia High School for Girls. Other educators include Marcus Foster (1923–73; 1968), principal of Simon Gratz High School, who transformed a demoralized, low-performing school into one of the best in the Philadelphia public school system, and the Rev. Russell Conwell (1843–1925; 1922), founder of Temple University, an outgrowth of adult education classes at his church. Conwell believed that inexpensive college education was essential if all Americans were to have a chance of upward mobility.

The many scientists who have won the award testify to Philadelphia’s importance as a center for medical and scientific research. Chevalier Jackson (1865–1928; 1926) invented the bronchoscope. John Gibbon Jr. (1903–73; 1963) invented the pump oxygenator, commonly known as the heart-lung machine. Using this machine, Gibbon was the first person to successfully perform open heart surgery. Ruth Patrick (1907–2013; 1973), who worked as a scientist at the Academy of Natural Sciences at a time when there were very few women scientists in Philadelphia, became one of the world’s leading environmental scientists, influential in developing standards for clean water.

The common thread among the awardees has been a desire to make Philadelphia a first-class city, often by creating models that have been influential in other cities. The winners of the Philadelphia Award have lived Edward Bok’s favorite motto: “Make the world a bit more beautiful and better because you have been in it.”

David Haugaard is the director of research services at the Historical Society of Pennsylvania. He edited the biographies written by HSP staff and volunteers for the Philadelphia Award project (now available on the organization’s website). He received his M.A. in history from the University of Pennsylvania. David previously worked at the Chester County Archives and on the Biographical Dictionary of Pennsylvania Legislators.