Black Power, a movement significant to the black freedom struggle in Philadelphia, came to prominence in the 1960s and 1970s through the combined efforts of local and national organizations including the Church of the Advocate, the Black Panther Party, the Black United Liberation front, and MOVE. Before and after Stokely Carmichael (1941-98) of the national Student Non-Violent Coordinating Committee (SNCC) invoked the term Black Power in 1966, African American activists in the Philadelphia region fought for economic equality, educational equity, improved living conditions, and an end to police brutality.

Many advocates of Black Power had ties to the civil rights movement, but during the 1960s they diverged from its nonviolent stance and emphasized black identity and empowerment through anti-poverty programs, self-defense, and diasporic connections with other oppressed people. Black Power stressed that black people should be in control of black communities. In Philadelphia, early Black Power initiatives included projects to raise awareness of African and African American history and culture, including the Freedom Library on Ridge Avenue in North Philadelphia, opened in 1964 by John Churchville (b. 1941). Churchville and other activists who gathered at Freedom Library formed Philadelphia’s first Black Power political organization, the Black Power Unity Movement (BPUM), in 1965. An organization by the same name formed in Camden, New Jersey, in 1967.

In North Central Philadelphia, the Church of the Advocate, with a congregation becoming increasingly African American as whites moved out of the city, became an important center of Black Power. Under the leadership of Father Paul Washington (1921-2002), one of the Freedom Library activists, the church and BPUM hosted a Black Unity Rally in February 1966 that drew a capacity crowd to hear civil rights leader Julian Bond (1940-2015). Black Power rallies followed in locations around the city during the summer, including two attended by Stokely Carmichael (1941-98). In 1968, the Church and BPUM also hosted the Third National Conference on Black Power, attended by two thousand people and leading to the creation of the Advocate Community Development Corporation and a black activist newspaper, Voice of Umoja. 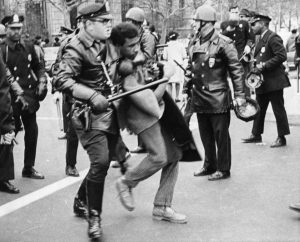 In November of 1967 Black Power protesters demonstrated outside of the Philadelphia Board of Education. The students were seeking courses on black history as well as black instructors. (Special Collections Research Center, Temple University Libraries)[/caption]

Church of the Advocate members included Reggie Schell (1941-2012), who in 1969 became the defense minister (leader) of the Philadelphia chapter of the Black Panther Party. The Black Panthers originally formed in 1966 in Oakland, California, to patrol and protect African American neighborhoods from police brutality. In Philadelphia, under Schell’s leadership the local chapter expanded from its base in North Philadelphia to become influential throughout the city through a “Free Food for Survival” program, education programs, rallies, and other political events. The Black Power movement also spread to the region’s college campuses, where sit-ins called for black faculty and black studies programs, and to high schools. Activism focused especially on control of the Philadelphia public schools. When black students from a dozen Philadelphia high schools marched on a Philadelphia Board of Education meeting on November 17, 1967, with demands including black history classes taught by black teachers, many wore Black Power buttons.

The rising tide of black activism and militancy so alarmed the Philadelphia Police Department that even the students marching on the school board were met with nightstick-wielding officers, commanded by then-commissioner and future mayor Frank Rizzo (1920-91). Police raided homes of Black Power activists and offices of organizations, and many local activists were followed by FBI agents from COINTELPRO, a counterintelligence program that aimed to infiltrate U.S. political organizations, including the Black Panther Party. (COINTELPRO was discovered in 1971, when activists raided the Media, Pennsylvania, office of the FBI.)

Holly Genovese is a Ph.D. student in history and Women, Gender, and Sexuality Studies at Temple University. Her interests are in incarceration, public history, and Black Power. She is Contributing Editor at Auntie Bellum Magazine and a contributor at Book Riot, Rabble Lit, and the Us Society for Intellectual Historians blog. Her writing has been featured in Bustle, The Establishment, and Scalawag Magazine.