The International Peace Mission Movement, an American communitarian religion founded in the early decades of the twentieth century, established a significant presence in Philadelphia under the leadership of its African American minister, the Reverend Major Jealous Divine, better known as Father Divine (1879?-1965). As an American sectarian religious innovator, Father Divine reached the height of his national renown during and following the Great Depression. Believed by his followers to be an incarnation of the creator God of the Christian Trinity, Father Divine has been both appreciated as an early leader in the movement for African American civil rights and social justice and criticized as a self-promoter and instigator of a “cultic” religion. 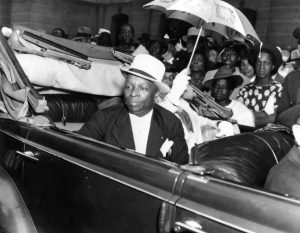 Father Divine visited Philadelphia for three days in September 1939. During this trip, he delivered fifteen lectures and served ten Holy Communion Banquets. His wife Peninnah, the first Mother Divine, is shown here seated next to him as they greet followers during the visit. (Special Collections Research Center, Temple University Libraries)[/caption]

Father Divine was the guiding theological, liturgical, scriptural, and administrative force behind the indigenous American religion he founded. While his adherents never associated him with a legal birth name, he has been identified by researchers as George Baker, a native of Rockville, Maryland. Influenced as a youth by the multitude of religions around him, from Methodist and Catholic to storefront African American churches and the New Thought Movement, he traveled the country as a young itinerant preacher. Gradually, he formulated his own unique system of belief: a celibate, perfectionist, communitarian, racially integrated, and economically self-sufficient American religion known as the International Peace Mission Movement.

Under Father Divine’s charismatic leadership, the Peace Mission grew nationally and internationally, located by 1914 in Brooklyn, New York, then moving on in 1919 to Sayville, Long Island, and in 1932 establishing a headquarters in Harlem. Through dynamic preaching, Father Divine taught that a positive consciousness in unity with his own “Divine Mind” was the only reality that would lead to good health, prosperity, and true happiness. Because he taught that this present earthly reality was heaven, his followers had no expectation of rewards in an afterlife. They would have a blessing of earthly and spiritual benefits by living up to his teachings and standards, which included positive work, good food, and a clean, safe place to reside. The Peace Mission was particularly known for its spotlessly clean cafeterias and restaurants, which served plentiful food at remarkably reasonable prices to the general public and the followers. Abundant dining was also a mark of Father Divine’s Eucharistic ritual known as the Holy Communion Banquet Service, served several times a day wherever he resided or visited as well as observed in all Peace Mission properties. 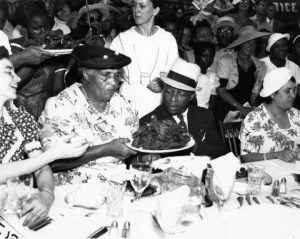 Father Divine is pictured here with Peninnah, the first Mother Divine, as they enjoy a meal at Shibe Park in Philadelphia. This photo was likely taken during Divine’s first visit to Philadelphia in September 1939. (Special Collections Research Center, Temple University Libraries)[/caption]

On September 3, 1939, Father Divine made a grand entrance into Philadelphia. Citing an invitation from municipal leaders, he traveled from Manhattan on the “Divine Special,” a sixteen-coach train that also carried his staff and followers. Leading a large parade from Broad Street Station through the streets, he invited guests and the curious to enjoy a bountiful Holy Communion Banquet Service at Musical Fund Hall, Eighth and Locust Streets. Over the next three days, he preached and served Banquets at Shibe Park, then the home of the Phillies baseball team, and the Baker Bowl, the Phillies’ former ballpark. Father Divine’s personal relationship with the City of Brotherly Love had begun.

By the time Father Divine came to Philadelphia, Peace Missions existed in many American cities and in Canada, Australia, New Zealand, England, France, Germany, Austria, and Panama. While most communities in the Northeast United States were African American, the great majority in the Midwest and the West were white. Father Divine and his followers were “radical” (to use their own words) critics of the way Americans permitted rampant race hatred and discrimination. Such teachings were outlined in his 1936 Righteous Government Platform. Father Divine and his faithful were “fanatical” (their words) in their adherence to Father Divine’s standards of living, known as his “International Modest Code,” which included celibacy, no smoking, no drinking, no undue mixing of the sexes, no profanity, no vulgarity, and no obscenity in everyday speech. Women wore no garb considered immodest, including low-cut blouses or slacks. They would not buy or wear cosmetics or perfumes, although jewelry was allowed. No short pants were permitted, even in buildings without air conditioning, a prohibition that extended to non-followers who ate in Peace Mission cafeterias and dining rooms. 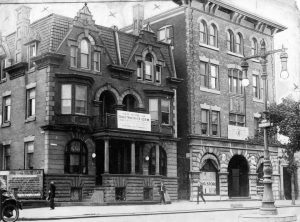 Father Divine’s theology of positive consciousness also informed his economic principles. He taught that God wanted his community to work hard and make money and that there was tremendous social power in accumulated community wealth. He guided his followers to pool their financial resources to obtain, preserve, beautify, restore, and secure land and properties. They learned how to repair, construct, or restore buildings bought at low cost, as well as do their own landscaping, gardening, plumbing and heating work. Followers also repaired the church’s fleet of automobiles or other required machinery. The minister’s “Divine Cooperative Plan” called on the membership to be honest, never accept government monies or welfare, never make purchases on credit, and pool personal finances to make group investments. Followers never insured homes, businesses, automobiles, or their own lives because the only insurance needed was the assurance to be blessed by God, Father Divine. The Peace Mission also created employment opportunities for followers–many of whom were female and uneducated–by establishing domestic work agencies. In the Philadelphia area, such workers were well known through the 1970s for their industry, reliability, and honesty providing house cleaning and childcare services.

In 1939, the Peace Mission purchased buildings at South Broad and Catharine Streets in Philadelphia, formerly the Hotel Dale, and christened them the Circle Mission Church, Home and Training School of Pennsylvania. Father Divine in the 1940s began to formalize his movement into a more structured church with an eye to sustaining it into the future. He moved to Philadelphia in July 1942 and established the Circle Mission Church as his international headquarters. Although this separated him from his church’s main base of membership, he abandoned New York City, citing gross disrespect from the metropolis and a lack of appreciation for the millions of dollars he claimed to have saved the city through his Peace Mission’s ministry of supporting indigent, jobless, hungry, and disempowered residents. Leaving New York also allowed him to depart from various legal entanglements, especially a monetary settlement won by a former member from a lawsuit. 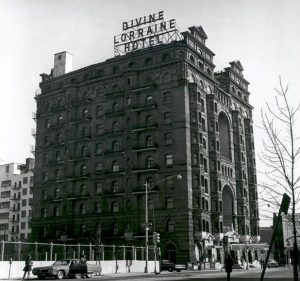 Father Divine acquired this former apartment building, shown here in a 1971 photograph, in 1948. It functioned as a hotel and a major center for the Peace Mission’s welfare activities until 1999. (PhillyHistory.org)[/caption]

In need of housing in Philadelphia for migrating believers from New York and new adherents, Father Divine directed church members to purchase structures throughout Center City, West Philadelphia, and North Philadelphia. Referring to their residences as “heavens,” male and female followers lived separately. In 1949, the Tracy Hotel adjacent to the University of Pennsylvania at Thirty-Sixth Street near Chestnut Street came under Peace Mission control and was soon operating as the Divine Tracy, an interracial residential and transient hotel. The purchase of the smaller 150-room Divine Tracy followed the 1948 acquisition of the building that became most emblematic of Father Divine’s presence in Philadelphia: the 246-room Lorraine Hotel at North Broad Street and Ridge Avenue between City Hall and Temple University. The hotels required even married couples to rent single rooms on separate same-sex floors. Both hotels were closed by the first decade of the twenty-first century, the Divine Lorraine in 1999 and the Divine Tracy in 2006. 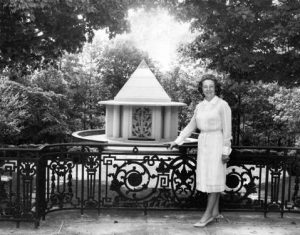 Edna Rose Ritchings (1925-2017), the second Mother Divine, led the Peace Mission after Father Divine’s death in 1965. In this 1977 photograph, she is pictured with the Shrine to Life, Father Divine’s burial site at the Woodmont estate. (Special Collections Research Center, Temple University Libraries)[/caption]

After the mission became established locally, Father Divine theologically defined Philadelphia as a new city of God and “the International Country Seat of the World.” Philadelphia remained a blessed space and place to his followers even after Father Divine’s death in 1965. He had two celibate spiritual marriages: one to a “dark complected” woman–references to race are avoided in Peace Mission discourse–named Peninnah or “Sister Penny,” who died in the early 1940s. In 1946, he took a second wife, the “light complected” Canadian follower Edna Rose Ritchings (1925-2017), also referred to as Mother Divine. This second wife, who was twenty-one at the time of their marriage, maintained his religious movement with Father Divine’s aesthetic style of positive thinking and a gospel of wealth remaining richly in evidence at Woodmont, the Church’s seventy-two-acre suburban estate in Gladwyne, Montgomery County. Down to a few dozen celibate followers by the time of Mother Divine’s death, the Peace Mission’s members assumed responsibility for administering the property and the library and museum at Woodmont in order to preserve Father Divine’s legacy and his teachings about how to sustain a life harmonious with God’s consciousness.

Leonard Norman Primiano is Professor of Religious Studies at Cabrini University in Radnor, Pennsylvania. He is co-developer with Will Luers of “The Father Divine Project,” an online research database and multimedia interpretive documentary about the Peace Mission Movement.