With a significant presence in the Greater Philadelphia area dating back to the 1960s, Nigerians became the second-largest African population in the Delaware Valley in the first years of the twenty-first century. As major leaders in developing a new Pan-Africanism and in establishing pan-ethnic, transnational organizations to assist in the development of vibrant communities in Philadelphia and in Africa, they played an important role in contributing to Philadelphia’s revitalization. 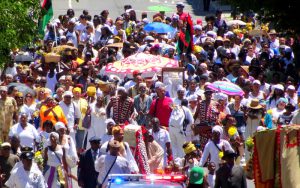 During the ODUNDE Festival, held in South Philadelphia in June, celebrants march to the river to give offerings to Odun, a deity of the Yoruba people of Nigeria. Nigerians make up the second-largest African population in the Delaware Valley. (Photograph by Donald D. Groff for The Encyclopedia of Greater Philadelphia)[/caption]

As part of the New African Diaspora of the mid-twentieth century, Nigerians who migrated to Greater Philadelphia largely came to pursue higher education, following in the footsteps of the first Nigerian-born individual to study in the United States, Nnamdi Azikiwe (1904-96), who graduated in 1930 from Lincoln University in Chester County. Many of the students arriving in the 1960s and the 1970s primarily received scholarships from their government and from the universities they planned to attend. Several students attended Swarthmore and the University of Pennsylvania and did return home. The first post-independence decade in Nigeria, the 1970s, was marked by a period of economic boom.  The Nigerian government was eager to support the educational attainment of its citizens, even those who studied abroad, in the hopes that they would return and help develop their country.

Over the thirty-year period beginning in the 1980s, Nigerian migration to the U.S. and to Greater Philadelphia substantially increased. During the early 1980s, the prosperity and relative political stability that Nigeria experienced in the 1970s ended due to the decrease in oil revenues and the subsequent decline in the economy.  A military coup in early 1983 deposed President Shehu Shagari (b. 1925), the elected leader, and a second coup in 1985 removed General Muhammadu Buhari (b. 1942), ushering in the leadership of General Ibrahim Babangida (b. 1941) and the adoption of a Structural Adjustment Program in 1985 at the behest of the International Monetary Fund (IMF) and the World Bank. Thus began a period of economic crisis and austerity in Nigeria. To escape the economic and political crises at home and to improve their socioeconomic status and that of their families, many Nigerians left their country to attain higher education and stable employment.  This migration sometimes assumed a particularly gendered character as some African women sought to escape difficult relationships with spouses and other relatives as well as certain local cultural practices, including female genital cutting. 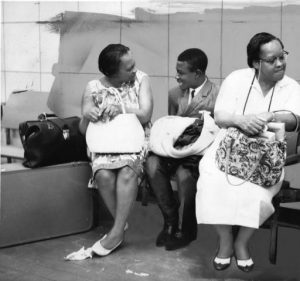 By the time of the 2010 U.S. Census, Philadelphia had become an important destination for immigrants and refugees from sub-Saharan Africa.  About seven percent of the foreign-born in the city were from Africa, including about four thousand Nigerians. As many as fifty thousand Africans lived in Greater Philadelphia. While many African immigrants settled in the Delaware Valley upon their arrival in the U.S., others came as part of a step-migration process, as those arriving in New York  relocated  to obtain more affordable housing and to experience better living conditions.

By the early twenty-first century Africans in the U.S. were the most highly educated immigrant populations with 43 percent of them holding college degrees. Nearly two-thirds of Nigerians had college degrees, with many of them holding graduate degrees. The establishment of colleges and universities in Nigeria preceded that of other sub-Saharan nations and thus provided Nigerians with a head start in knowledge about and achievement of higher education. The push for higher educational attainment was first evident during the creation of Yaba College in Lagos in 1932, followed by the creation of University College, Ibadan (subsequently the University of Ibadan) in 1948. In Greater Philadelphia, Nigerians’  educational attainment led to median household incomes of $59,000 and homeownership rates of 61 percent, surpassing those of other African immigrants, refugees and African Americans. Many Nigerians worked in health care, engineering, architecture, computer science, law, and academia.

Despite holding a number of professional positions as a result of their high rates of educational attainment, a number of Nigerians who faced discrimination were forced to accept positions as taxi drivers and hair braiders in order to survive. In addition, not all Nigerians, nor all immigrants in general, were able to transfer the degrees and experience earned in their homeland to professional positions in the U.S., due to licensing and other requirements in some fields. Working as taxi drivers, for example, while temporary for some, became more long-term for others. Experiencing discrimination in the labor market also led some Nigerians to become entrepreneurs and establish their own businesses. From the 1990s onward, many of these businesses opened in West Philadelphia, particularly the Baltimore Avenue corridor, which became a commercial and social hub for many Africans.

Reflecting a diversity of more than 250 ethnic groups speaking distinct languages, Philadelphia’s Nigerian community consisted of many ethnic groups, including the Yoruba, Igbo, Hausa, Edo, Ishan, Isoko, Ibibio and Efik. With the exception of the Hausa, these groups came from southwestern and southeastern Nigeria, the areas from which the majority of Nigerians came to the United States.  Although many African immigrants settled in West and Southwest Philadelphia and Upper Darby, Nigerians did not cluster in one particular area. They were more scattered in several Philadelphia neighborhoods and the surrounding suburbs. 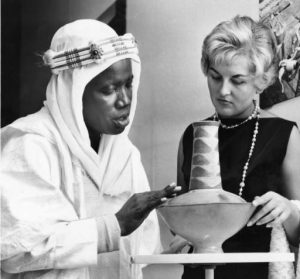 The Nigerian legislator Alhaji Umaru Gwandu (left) explains the significance of the decorations on a pottery jug from northern Rhodesia (now known as Zimbabwe). Gwandu, speaker of Nigeria’s Northern House of Assembly, was the guest of honor on that day in 1959 for the opening of the Treasures of Africa exhibit at Philadelphia's Commercial Museum. (Special Collections Research Center, Temple University Libraries)[/caption]

Nigerians, like other immigrant groups, sustained transnational connections, including, most importantly, the practice among so many immigrants of sending remittances to their homeland. Western Union franchises in West Philadelphia and other areas became important sites for transmitting these remittances “home” to meet relatives’ educational, medical and daily living expenses, especially during the early years of a Nigerian’s life in the U.S.

Nigerian entrepreneurship in Philadelphia also benefited from transnationalism. Direct linkages with suppliers in Nigeria assured the purchase and safe delivery of quality foodstuffs in such stores as the Nigerian African Food Market in West Philadelphia. Philadelphia-area businesses in turn assisted in establishing businesses and contributing to community and national development in Nigeria.

Many Nigerians also maintained transnational relationships by establishing and participating in nongovernmental organizations in the U.S. to support development in Nigeria. For example, the Nigerian Peoples’ Forum, formed in the U.S. in 1999, supported the development of democracy in Nigeria. Its nonpartisan activities included sponsoring the first televised presidential debate in the country and producing papers analyzing the elections to improve the electoral process. The forum also facilitated relationships between political officials in the U.S. and their counterparts in Nigeria.

In the mid-2000s the Delaware Valley Chapter became the “driving” group of the Nigerian Peoples’ Forum with a very pan-ethnic character, including members from all of the major ethnic groups from southern Nigeria. About thirty-five members belonged to the Delaware Valley Chapter, illustrating its elite nature. Chapters also formed in many other cities, with membership by invitation only, mainly for professionals. The organization frequently sponsored visits by Nigerian political officials to the U.S. and conferred awards on U.S.-based Nigerians for professional achievements.

Supporting “Home” and the African Diaspora

Nigerians also established ethnic associations in Philadelphia and the surrounding suburbs to support the development of their communities in the U.S. and their homeland. In Philadelphia, they frequently came together with other African Diaspora populations, such as African Americans and Afro Caribbeans, forming organizations to improve their status. Such Pan-Africanism became a critical coping mechanism in addressing the discrimination, racism, and classism that they experienced from the larger society even as it promoted the unity and advancement of the African continent and black populations around the globe. 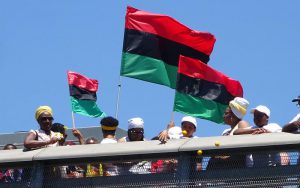 ODUNDE Festival celebrants on South Street Bridge on June 12, 2016, display Pan-African flags while throwing offerings into the Schuylkill River. (Photograph by Donald D. Groff for The Encyclopedia of Greater Philadelphia)[/caption]

A prime example of such efforts was the Akwa Ibom Association, established to promote Nigeria and to improve the position of Nigerians and Diaspora populations in the U.S.  Its Philadelphia chapter, established in 1990 and composed of some  fifty active members in 2016, sent a team of twenty-five medical professionals to Akwa Ibom State in southeastern Nigeria to join with local physicians and nurses for two weeks  to provide medical exams and procedures. The association also provided scholarships for Akwa Ibom residents to pursue higher education in Nigeria.

The Akwa Ibom Association also demonstrated its Pan-Africanist commitment to improving conditions for black Americans. In 2016, in response to the massive water contamination problem in Flint, Michigan, it delivered thousands of bottles of water to that city’s largely African American community. When other natural disasters occurred in cities with significant black populations that included Nigerian communities, such as Houston and Chicago, the organization often provided food, clothing, and financial assistance.

Through the development of a new Pan-Africanism, Nigerians in Philadelphia strengthened bonds with other black populations in the city and beyond. In the process, they reaffirmed their transnational ties even as they reinvigorated aspects of urban civil society.

Mary Johnson Osirim is Provost and Professor of Sociology at Bryn Mawr College.  Her research has focused on women, entrepreneurship, the state and nongovernmental organizations in the microenterprise sectors of Nigeria and Zimbabwe, the development of gender studies scholarship in Anglophone Sub-Saharan Africa as well as transnationalism and community development among African immigrants in the United States.  She is the co-editor of Global Philadelphia: Immigrant Communities, Old and New. She was a member of the Board of Directors of the African Studies Association and currently serves on the Board of the African Family Health Organization (AFAHO) in Philadelphia.