The Vine Street Expressway (Interstate 676), a 1.75-mile depressed limited-access highway traveling east-west across the northern edge of Philadelphia’s central business district, resulted from more than sixty years of effort to connect I-95 and I-76 and move traffic more easily between and through the city to surrounding counties in Pennsylvania and New Jersey. Its route through Philadelphia has been important in the imagination of Philadelphia's planners since the days of William Penn (1644-1718), whose surveyor Thomas Holme (1624-95) mapped Vine Street in 1682 as a 50-foot-wide right-of-way and northern city boundary extending from the Delaware River to the Schuylkill River. City planners Ed Bacon and Oscar Stonorov's "Better Philadelphia" exhibit showed Philadelphians proposals for the city's future. Among these was a plan to widen Vine Street in anticipation of it becoming an expressway. (Philadelphia City Archives)[/caption] 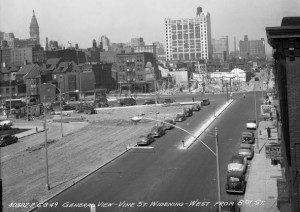 Work to widen Vine Street began in the late 1940s. By 1951, the road had been expanded to ten lanes. (Philadelphia City Archives)[/caption] Resistance to the Vine Street Expressway was particularly vehement in Chinatown, where the original plans threatened Holy Redeemer Chinese Catholic Church and School along with homes and businesses. (Historical Society of Pennsylvania)[/caption] Vehicles move along the Vine Street Expressway during the noon hour, when traffic density is relatively light compared to rush hours. (Photograph by Donald D. Groff for the Encyclopedia of Greater Philadelphia)[/caption]

Mary Yee is a doctoral student in literacy studies at the University of Pennsylvania Graduate School of Education. Her research interests include community development, community health and literacy, and educational issues in immigrant communities.