"Success to the Infant Navy" creamware pitcher with transfer print, circa 1790. (Philadelphia History Museum at the Atwater Kent, Photograph by Sara Hawken)

This creamware pitcher from the late eighteenth century celebrates the United States Navy with transfer print images and text that highlight the role of the Navy in the early years of the American republic. The words “Success to the Infant Navy” adorn the pitcher beneath the spout, where an image of the Great Seal of the United States, adopted by the Continental Congress in Philadelphia on June 20, 1782, also appears. 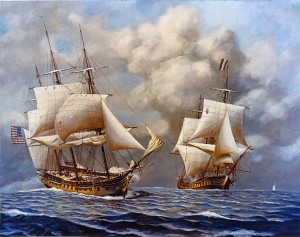 In action during the Quasi-War, the USS Constellation (depicted at left) captured the French frigate L'Insurgente in the Caribbean. (Navy History and Heritage Command via Wikimedia Commons)[/caption]

One side of the pitcher features a splendid image of the naval engagement between the U.S.S. Constellation and the French frigate, L’Insurgente. The two ships met in battle on February 9, 1799, near the island of Nevis in the West Indies as part of the conflict between the United States and France known as the Quasi-War (1798-1800). The caption beneath the image describes the engagement: “L’Insurgent French Frigate of 44-Guns & 411 Men Striking her Colours to the American Frigate Constellation. Commodore Truxton of 40-guns, after an action of an hour and a half in which the former had 75 men killed and wounded and the latter one killed and three wounded.” The United States Navy captured L’Insurgente, won the battle, and suffered far fewer casualties than the French.

The USS Constellation was one of the six frigates approved for construction under the Naval Act of 1794, which authorized President George Washington (1732-99) “to provide, by purchase or otherwise, equip and employ four ships to carry forty-four guns each, and two ships to carry thirty-six guns each.” Although the United States had a Navy during the Revolutionary War, established by the Continental Congress with a resolution on October 13, 1775, the young nation did not maintain the ships of the Continental Navy after the immediate threat of war ceased. The U.S. Constitution of 1787 affirmed the role of the federal government in organizing and maintaining a naval force, and the Naval Act of 1794 stimulated the process of building American naval armaments for the new republic.

Construction of the USS Constellation began in 1795 at a Baltimore shipyard. Joshua Humphreys (1751-1838), a Philadelphia ship designer, created the plans for the ship, while David Stodder, a Baltimore shipbuilder, undertook its construction. The federal government in Philadelphia sent Thomas Truxton (1755-1822) to organize and coordinate the shipbuilding efforts, which concluded with the ship’s launch on September 7, 1797, and commissioning in June 1798. Truxton became the ship’s first captain and remained in command of the Constellation during its battle with L’Insurgente in February 1799, as memorialized on the “Success to the Infant Navy” pitcher.

In addition to the naval battle between the United States and the French, the “Success to the Infant Navy” pitcher displays a coastal scene accompanied by a verse from the eighteenth-century political song “Adams and Liberty.” Robert Treat Paine (1773-1811) wrote the song in 1798 as a tribute to President John Adams (1735-1826). The text on the pitcher reads:

Our mountains are crowned with imperial oak;
Whose roots, like our liberties, ages have nourished;
But lone e'er our nation submits to the yoke,
Not a tree shall be left on the field where it flourished.
Should invasion impend,
Every grove would descend,
From the hill-tops, they shaded, our shores to defend.
For never shall the sons of Columbia be slaves
While the earth bears a plant, or the sea rolls its waves.

Paine’s lyrics affirmed the resolve of the United States to defend American shores against foreign invasion. Hence, the song was a fitting tribute to the United States Navy and its role in the early republic. Adams was a strong proponent of the Navy, and during his presidential administration the federal government established the Department of the Navy as a separate entity from the War Department. The “Success to the Infant Navy” pitcher commemorates the United States Navy during an important period in its growth. During the final decade of the eighteenth century, when Philadelphia served as capital of the United States, the Navy grew in both its administrative capacity and its ability to wage war.

Text by Melanie Dudley, a graduate student in history at Villanova University.