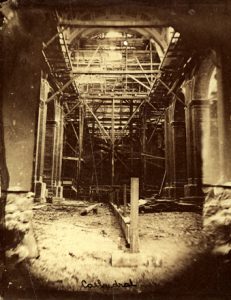 This 1862 photograph taken by Robert Newell and published in McAllister scrapbooks of views of Philadelphia, shows the interior construction of the cathedral. (Library Company of Philadelphia)[/caption] 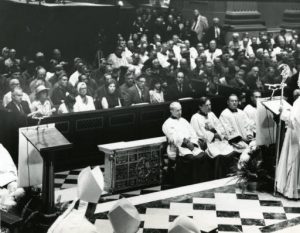 In this photograph, Papal Legate James Cardinal Knox addresses the congregation prior to the opening Mass of the 41st Annual Eucharistic Congress at the Cathedral Basilica of Saints Peter and Paul on August 1, 1976. (Special Collections Research Center, Temple University Libraries)[/caption]

Wendy Wong Schirmer, a historian of Early America and U.S. foreign relations, received her Ph.D. from Temple University. She is working on a book project that examines the relationship between print culture, neutrality in the Early Republic, and the politics of slavery.