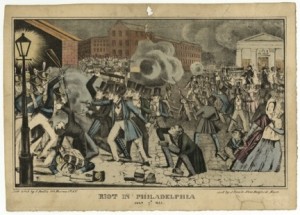 This lithograph depicts key elements of one of the riots of 1844. The image portrays the fight that took place in the Southwark neighborhood on July 7, 1844. (Historical Society of Pennsylvania)[/caption]

Click Here to View a Larger Version of this Map

On Sunday, July 7, the crowd reassembled, and this time it armed itself with cannon. Egged on by nativist speakers, the crowd forced the militia to surrender the church and its prisoners. Cadwalader returned to Southwark about sunset at the head of a column and tried to clear the area around the church. When the crowd attacked the militia with bricks, stones, and bottles, the militia fired on them, killing at least two and wounding more. Starting around 9pm, the crowd counterattacked. For the next four hours, rioters and militia battled in the streets of Southwark, with both sides firing cannon. By morning, four militiamen and probably a dozen rioters were dead, along with many more wounded. Southwark’s aldermen negotiated the militia's withdrawal from their district, but thousands of militia troops from other parts of the state arrived to patrol the City of Philadelphia.

The riots did not resolve the place of the Irish in the city. On the one hand, few Philadelphians were willing to endorse publicly the attacks on Catholics, and more than two thousand Philadelphians signed an address praising the militia’s use of “lawful force which unlawful force made necessary.” On the other hand, in the October elections, amid the heaviest turnout in Philadelphia's history, Levin and another nativist won congressional seats and other nativists took lesser posts.

Zachary M. Schrag is a professor of history at George Mason University. He is at work on a book about the 1844 riots. 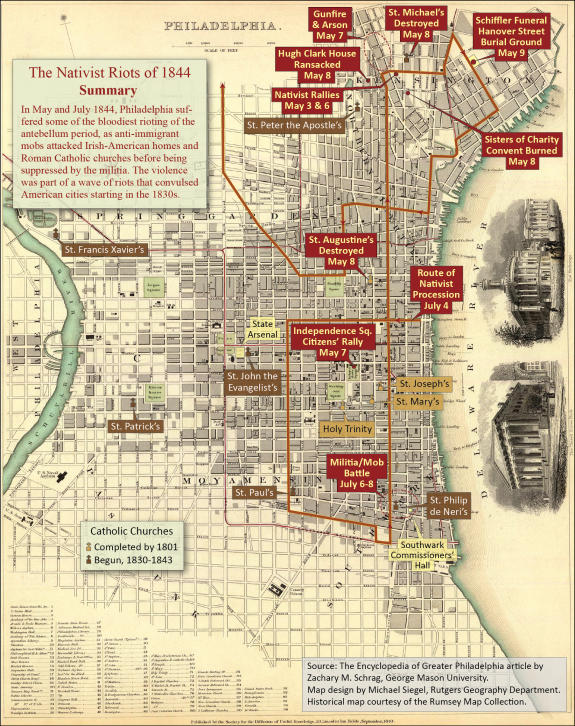