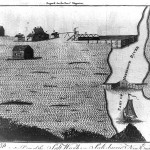 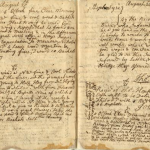 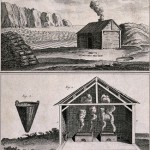 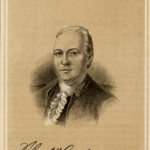 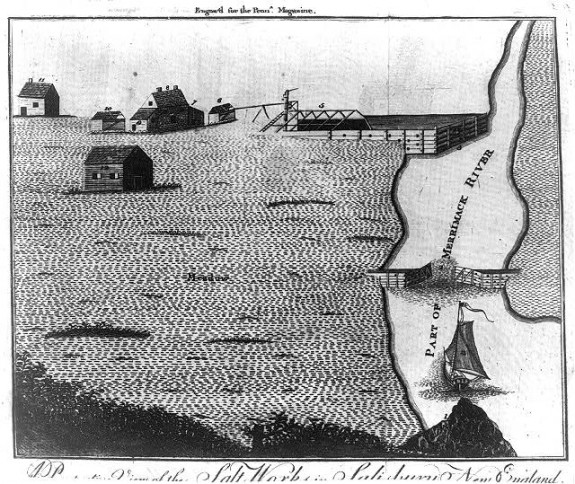 During the colonial era, Americans imported most of their salt, important for food preservation before refrigeration, from England. A blockade by the Royal Navy early in the Revolution prevented foreign imports to the colonies. The rising cost of salt led to a boom in the construction of American salt works in coastal areas, including several works on the New Jersey coast owned by Philadelphians. This 1776 engraving shows a typical Revolutionary American salt works in Salisbury, New Hampshire, on the Merrimack River. Philadelphians were hopeful that the Pennsylvania and Union Salt Works in New Jersey would provide them with a domestic source of salt, but production was low and the works were subject to sabotage by the British. The end of the naval blockade and productive salt mines in Ohio and West Virginia eventually put an end to salt-making attempts in the Greater Philadelphia region. 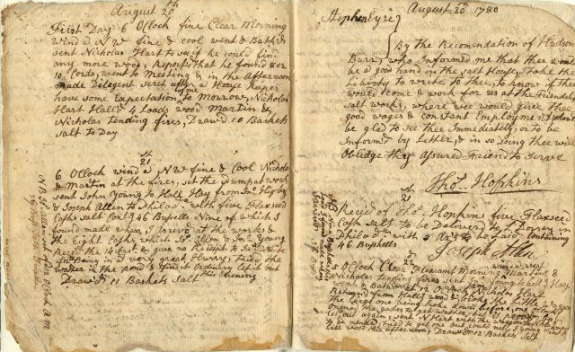 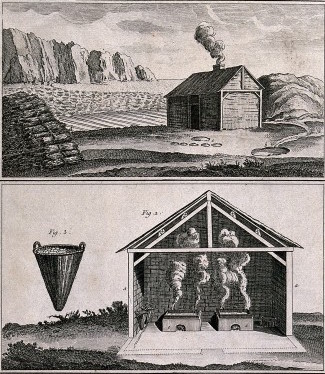 Cross-section of a Salt Boiling House

Salt making in the eighteenth century was a simple process. Salt water was pumped from salt marshes into a boiling house. The water was collected in large cauldrons where it was boiled to evaporate the water and leave behind salt. This engraving shows both exterior and interior views of a salt boiling house. Thomas Hopkins' 1780 journal of the Friendship Salt Works paints a less-simple image: The constantly burning fires consumed large amounts of dry wood, which had to be hauled to the site and chopped. The fires made for extremely uncomfortable working conditions in the summer, exacerbated by thick clouds of mosquitoes. The labor was exhausting and frustrating for the laborers. Hopkins also complained of sabotage by locals, who diverted the works' water supply with a ditch in October. Despite all of these problems, Friendship was one of the most successful of the New Jersey salt operations, producing up to ten baskets of salt per day during the months Hopkins kept his journal. 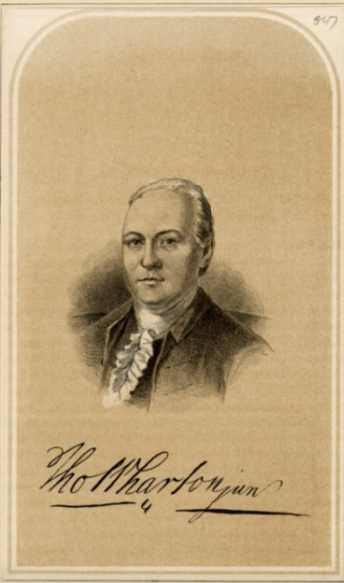 Thomas Savadge's Pennsylvania Salt Works in Toms River, New Jersey, was funded by the Pennsylvania Council of Safety, a revolutionary governing committee in opposition to the Royal appointees. The Pennsylvania Salt Works was troubled from the start by problems with funding and labor that delayed production. The Council of Safety initially bolstered financial support and provided the Pennsylvania Salt Works with guards to ward off enemy attacks. Their support waned after two years without any salt being produced by the works. Council member Thomas Wharton, shown here, remained in correspondence with Savadge throughout this period and penned a 1778 letter informing Savadge that the Council was refusing further requests for support.

Wharton was born in Chester County, Pennsylvania, in 1735 into a family of prominent Quakers. After protesting the Trade Act of 1774, Wharton was appointed to the Council of Safety and rose to become its president in 1776. In 1777, Wharton was elected president of the Commonwealth of Pennsylvania, a position he held until his death in March of the next year. 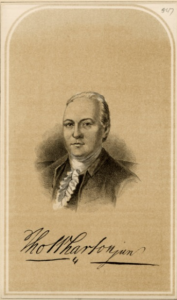 Thomas Wharton, a member of the Council of Safety, corresponded with Thomas Savadge as Savadge tried to launch the Pennsylvania Salt Works in Toms River, New Jersey. (Historical Society of Pennsylvania)

Michael Adelberg has been researching the American Revolution in New Jersey for twenty-five years. He is author of “ ‘Long in the Hand and Altogether Fruitless’: The Pennsylvania Salt Works and Salt-Making on the New Jersey Shore during the American Revolution” in Pennsylvania History, and articles published in The Journal of Military History and The Journal of the Early Republic.

Adelberg, Michael. “ ‘Long in the Hand and Altogether Fruitless’: The Pennsylvania Salt Works and Salt-Making on the New Jersey Shore during the American Revolution.” Pennsylvania History 80 (2013): 215-242.

Bowman, Larry. “The Scarcity of Salt in Virginia during the American Revolution,” Virginia Magazine of History and Biography 77 (1969): 464–72.