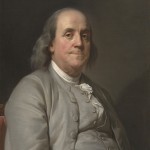 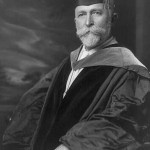 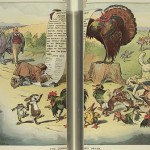 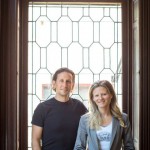 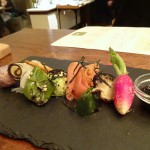 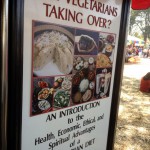 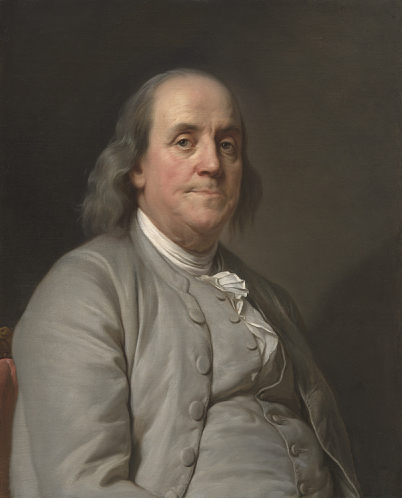 Statesman and publisher Benjamin Franklin spent several years as a vegetarian. In 1770 he sent from London a shipment of "Chinese caravances"–soybeans–to Philadelphia botanist John Bartram with instructions for turning them into a Chinese "cheese" called "Tau-fu." Thus Franklin introduced the vegetarian staple tofu to the American colonies. 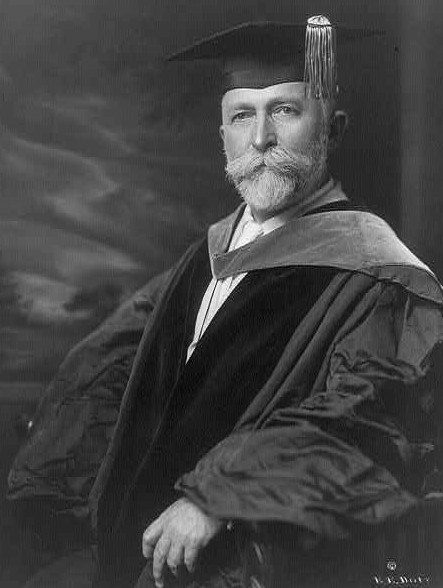 John Harvey Kellogg was a leading figure in shifting vegetarianism into a personal health movement. When he became the superintendent of the Battle Creek Sanitarium in 1876 he introduced flaked cereal as a healthier alternative to the usual breakfast fare of the sanitarium. This idea spread, with Philadelphia receiving its own Battle Creek Sanitarium in 1905. His brother, Will Keith Kellogg, who worked in the sanitarium for over twenty years, would go on to found the Battle Creek Toasted Corn Flake Company, which would become known the world over as Kellogg’s and would produce cereals such as Frosted Flakes and Rice Krispies. 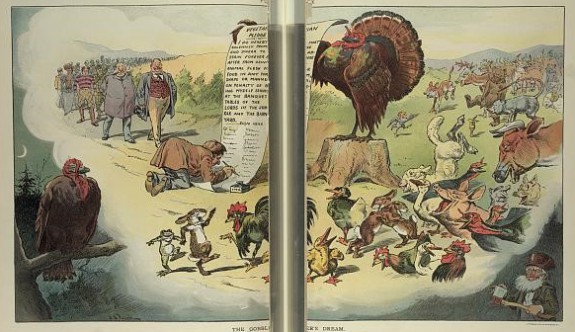 Before the twentieth century, vegetarianism was viewed as a moral or social reform issue. In this 1905 depiction a turkey dreams of a day when people will stop eating animals and instead commit to eating vegetables. With the people lining up to sign the pledge, animals of varying species can be seen dancing and celebrating the occasion. The reality of the situation is depicted by a disheveled man wielding an axe to kill the turkey. In this image, vegetarianism is depicted as lofty moral idealism, with people committing to a less violent way of getting the sustenance necessary for survival.

The Founders of Vedge, Richard Landau and Kate Jacoby

Husband and wife team Richard Landau and Kate Jacoby moved their Horizons restaurant from Willow Grove to Philadelphia in 2006, sparking a vegetarian renaissance in Philadelphia. In 2011 they opened Vedge, focusing more heavily on the preparation of vegetables instead of meat imitations. While they were beginning operation of Vedge, VegNews magazine in 2012 named Philadelphia the “best midsize city for vegans.” Vedge was named by Zagat in 2014 to have the best food in the city. (Photograph by N. Santos) 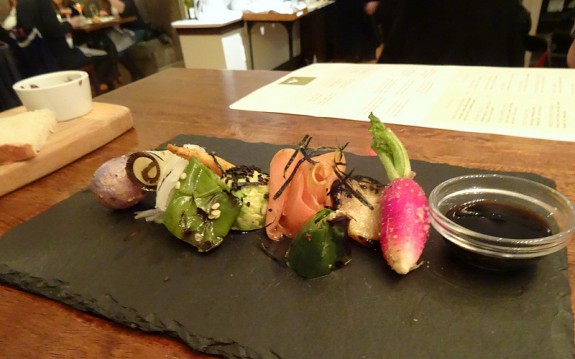 A Dish at Vedge

This radish dish from Vedge restaurant in Philadelphia exemplifies a new style of vegetarianism. Rather than vegetarians attempting to use foods such as tofu to simulate the taste and texture of meat, restaurants such as Vedge place vegetables, and their flavors, center stage. They introduce variety into their dishes by cooking, seasoning, and preparing their vegetables in a variety of ways. (Photograph by Donald D. Groff for the Encyclopedia of Greater Philadelphia) 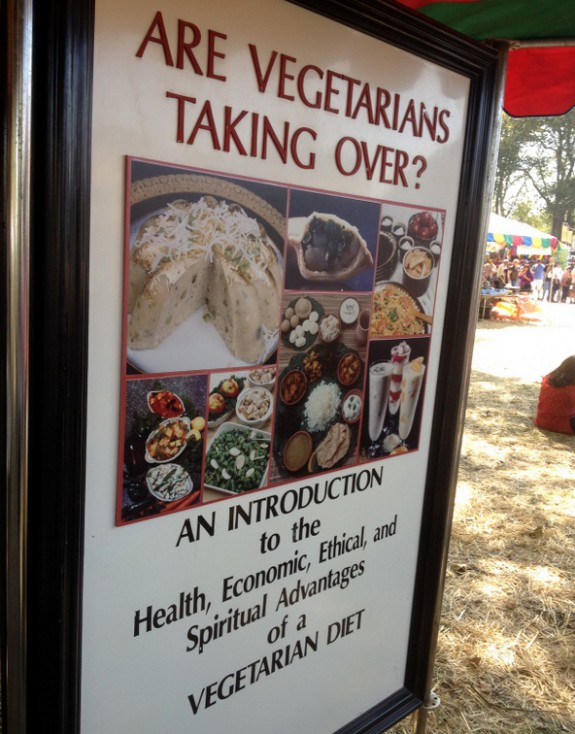 Are Vegetarians Taking Over?

A sign draws attention to a booth promoting vegetarianism during the Festival of India, which included a free vegetarian meal, held in September 2012 at Eakins Oval near the Philadelphia Museum of Art. (Photograph by Donald D. Groff for the Encyclopedia of Greater Philadelphia) 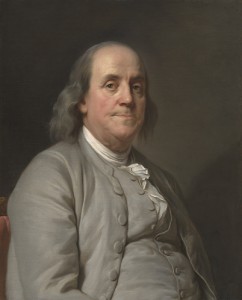 Predating an organized movement, individuals practiced vegetarianism and some produced vegetarian cookbooks. Benjamin Franklin (1706-90) spent several years as a vegetarian. In 1770 he sent from London a shipment of “Chinese caravances”–soybeans–to Philadelphia botanist John Bartram (1699-1777) with instructions for turning them into a Chinese “cheese” called “Tau-fu.” Thus Franklin introduced the vegetarian staple tofu to the American colonies.

Metcalfe also brought guest lecturers to Philadelphia, most notably Sylvester Graham (1794-1851). Later a household name because of the sugary version of his whole-wheat bread (the Graham cracker), Graham began his career as a temperance lecturer but soon turned his attention to healthful animal-free foods. In Philadelphia and other cities, his “Grahamite” followers established boardinghouses where like-minded individuals might stay, eat, and socialize according to Graham’s principles.

In May 1850, Metcalfe joined with William Alcott and Graham to create the American Vegetarian Society. Following a founding convention in New York City, the society’s first official meeting took place in Philadelphia’s Bible-Christian Church on September 4, 1850. The society promoted vegetarian precepts (then intertwined with pacifism, women’s suffrage, and the abolition of slavery) across the nation. By the time of the Civil War, the group’s membership and influence waned, partially because the fight for abolition had turned to military violence. However, the Bible-Christian Church was also instrumental in the formation of a new national group, the Vegetarian Society of America, founded in Philadelphia in 1886 by Henry S. Clubb (1827-1921) and lasting until his death. Philadelphia’s chapter, the Philadelphia Vegetarian Society, was founded in 1890. 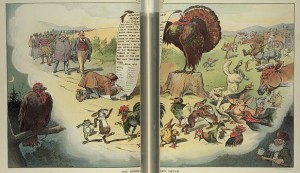 Before the twentieth century, vegetarianism was viewed as a moral or social reform issue. In this image, vegetarianism is depicted as lofty moral idealism, with people committing to a less violent way of getting the sustenance necessary for survival. (Library of Congress)

In the early twentieth century, vegetarianism’s emphasis turned from social reform to personal health. Vegetarian organizations proliferated throughout the country, many as chapters of the Vegetarian Society of America, and the geographic center shifted toward the Midwest with the popularity of the all-vegetarian Battle Creek Sanitarium opened in Michigan by John Harvey Kellogg (1852-1943). Kellogg expanded the idea to other cities, and Philadelphia gained its own Battle Creek Sanitarium at 1809 Wallace Street in 1905. Local vegetarian restaurants included the Hygienic Cafe on Walnut Street and the Good Health Restaurant on Market Street across from Lit Bros. department store.

Vegan innovation in the Philadelphia area continued: in 1986 Gene Baur (b. 1962) and Lori Houston (b. 1959) opened the seminal institution Farm Sanctuary in Chester County with funds from their sales of veggie hot dogs in the parking lot of Philadelphia’s Spectrum arena. Also based in suburban Philadelphia, Gary Francione, a prominent animal-rights philosopher, became the first university professor in the United States to teach animal rights theory, first at the University of Pennsylvania (1985), then at Rutgers University (beginning in 1990). Peter Singer, the author of the influential Animal Liberation (1975), joined the faculty of Princeton University in 1999.

VegNews Magazine in 2012 named Philadelphia “Best Midsize City for Vegans.” This can be credited largely to Rich Landau (b. 1967) and Kate Jacoby (b. 1980), whose Horizons restaurant moved in 2006 from Willow Grove to Philadelphia’s South Street area and established a new genre of upscale, creative vegetable-based dining. Many of the city’s most popular vegan eateries were created by former Horizons employees. In 2011 Landau and Jacoby opened Vedge, focusing more tightly on vegetables instead of mock meat. In 2014 a 5,000-person Zagat survey named Vedge “#1 for “Best Food.” The tourism agency Visit Philadelphia spotlighted Philadelphia’s veg-friendly scene in multiple campaigns, building upon Philadelphia’s longstanding and continuing role as a pivotal player in boosting animal-free eating.

Vance Lehmkuhl is a journalist with the Philadelphia Daily News and at Philly.com and is at work on a book about vegetarianism in Philadelphia.