Drag across the screen to turn the object.  Zoom to view details.  Read more below.
[pano file=”Caltrops/Caltrops.html” width=”570″ height=”480″]
Caltrops from the era of the American Revolution. (Philadelphia History Museum at the Atwater Kent, Historical Society of Pennsylvania Collection, Photograph by Sara Hawken)

Four-pointed wrought iron devices known as caltrops, or crow’s feet, have been used by militaries since antiquity and are still occasionally used today. When dropped, like the cluster shown here, three of the caltrop’s points act as a base while one point sticks up, making it dangerous to humans and horses alike. When placed in groups, caltrops effectively deter enemies from approaching or traveling through areas, much like modern-day land mines.

Caltrops have been found in pre-Revolutionary sites of the English colonies in America, including Jamestown and Ticonderoga, but not in large numbers. This may be because they were re-used as scrap iron, but it is more likely that they are scarce because they were not imported in large numbers nor were they made in the colonies. Most caltrops found in the United States were used during the American Revolution by British defenses. They have been found near Boston and in abundance around New York City, typically near sites of British fortifications and outposts.

Caltrops were not used widely, however, and would have been novelties to many people in the colonies. In January 1776, for example, American surgeon James Thacher (1754-1844) was intrigued when he first saw them in Massachusetts: “I accompanied several gentlemen to view the British fortifications on Roxbury neck, where I observed a prodigious number of little military engines called caltrops, or crow-feet, scattered over the ground in the vicinity of the works to impede the march of our troops in case of an attack. The implement consists of an iron ball armed with four sharp points about one inch in length, so formed that which way soever it may fall one point still lies upwards to pierce the feet of horses or men, and are admirably well calculated to obstruct the march of an enemy.”

It is unknown whether caltrops such as these in the collection of the Philadelphia History Museum might have been used during the British occupation of Philadelphia during 1777-78. That winter, British and American troops attempted to raid each other’s positions, and caltrops would have been useful in preventing such attacks. Caltrops are not mentioned in the papers of Pennsylvania Council of Safety or George Washington, suggesting that Pennsylvania and the Continental Army did not make or employ them. The British would have been more likely to use them to defend and command fixed positions and the approaches to Philadelphia.  As such, these caltrops are evocative reminders of the long winter of 1777-78, the tenuous grasp the British Army had on Philadelphia, and ultimately the end of British occupation.

Text by Matthew C. White, who earned his M.A. in history at Rutgers University-Camden. 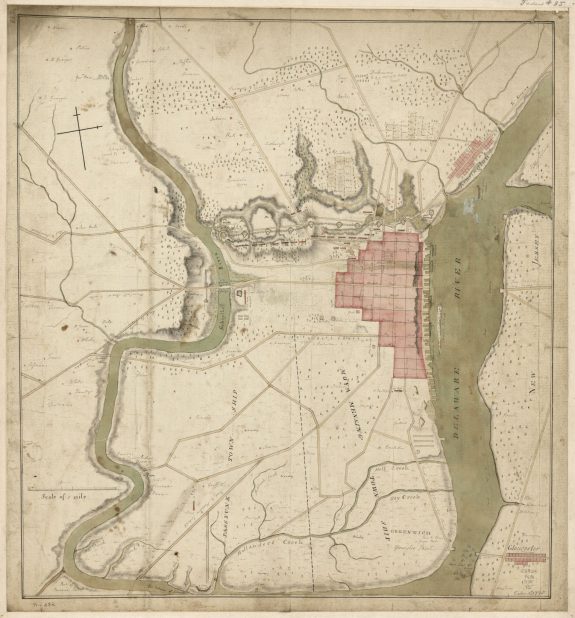 This map, created in 1778, shows lines of defense north of Philadelphia during the American Revolution. (Library of Congress)