Silver pitcher, 1841, presented at Mother Bethel AME Church to attorney David Paul Brown “by the disfranchised citizens of Philadelphia in testimony for his moral courage and generous disinterest in advocating the rights of the oppressed without regard to complexion or condition.”  Maker: Bard & Lamont.  Design by John Sartain, engraver.  (Philadelphia History Museum at the Atwater Kent, Historical Society of Pennsylvania Collection, Gift of the David Paul Brown Family, 1898, Photograph by Sara Hawken)

At first glance, this silver pitcher may appear to be interchangeable with others from its time period. The shiny exterior, the ornamental carving of the handle and the detailed decoration do not expose the distinct purpose of this item. Take a closer look at the body of the pitcher. What do you see? A sculpted leaf frame directs your eyes to the etching of a kneeling woman. The image, though small and simple in contrast to the elaborateness of the other elements of the pitcher, captures attention. It renders the pitcher as more than a commonplace artifact, but as a symbol of something else. What events led to the creation of such an item? 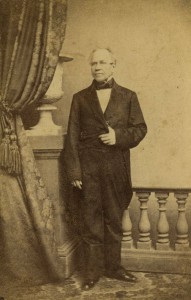 The Mother Bethel AME Church presented a pair of silver pitchers to attorney David Paul Brown (1795-1872) in February 1841. The reverse side of this half of the pair features an inscription to Brown thanking him for his service to African Americans. Although 1841 was several decades after Pennsylvania passed a law for the gradual abolition of slavery and prior to the Civil War, race continued to play a divisive role in Philadelphia courts. On several occasions, Brown served as a lawyer on behalf of African Americans who were accused of being fugitives from slavery. Such an impressive award suggests that Brown acted as counsel on many occasions, although records survive of only a few. In the late 1830s, Brown advocated on behalf of two different women named Mary and both cases were media sensations throughout the city. The etching of the kneeling woman is likely a direct reference to Brown’s involvement in the trials of these women. It also recalls an image of a man kneeling in chains, with the phrase “Am I not a man and a brother?” which became a popular symbol of the abolition movement after its creation by Josiah Wedgewood in 1787. Both images of human figures illustrate the fight for human dignity that was central to fugitive slave cases.

In the Court of Common Pleas, located on the first floor of Congress Hall in July 1835, Brown presented the case of Mary Gilmore, a woman in her late teens and of light skin. As a child, she was brought to Philadelphia to be raised by an African American baker on South Sixth Street, near Mother Bethel Church. In 1835, a Robert Atkins of Baltimore arrived to the city and claimed her as a runaway. Despite the witnesses and documents produced by Atkins, Brown successfully proved Gilmore’s position as a free citizen of Philadelphia. Using the testimony of respected African Americans in Philadelphia, he demonstrated her freedom. The case also showcased a thriving community of African Americans in Philadelphia, and in particular showed the members of the Mother Bethel AME Church to be active in the crusade to end slavery. Numerous newspaper articles covered the trial, yet Mary Gilmore vanished from history after its conclusion. Only a scant mention of her case in Brown’s memoir, The Forum: Forty Years Full Practice at the Philadelphia Bar reveals that after winning the case she continued to live a quiet life in Philadelphia.

In July 1837, Brown again defended a young, light skinned African American woman whose name was Mary Sheppard. As with the Gilmore case, newspaper media converged upon the court, which for this hearing was located in the first floor courtroom in Independence Hall, known at the time as the Old State House. The trial, which lasted several weeks in July, grew especially sensational as it was revealed that Mary Sheppard was pregnant. Not only was her freedom being decided, but so too was the status of her unborn child. The claimant, a John Walke of Virginia, provided several convincing witnesses who testified that Sheppard had been in his service. Relentless, Brown continued to fight on her behalf. Newspaper articles recounted several recesses that Brown was granted by Judge Archibald Randall. Several journalists assumed that Brown angled for additional time in the hopes that the child would be born during the trial, thus born freely in the state of Pennsylvania. Despite his efforts, Sheppard was returned to Walke. She seemed destined for a life of slavery. Surprisingly, this was not the case. Brown recounts her fate in his memoir. He noted that on her trip South, Sheppard outwitted her escorting officer by offering to prepare a special supper for him and then using that moment to escape to Chester County, Pennsylvania, and eventually fled into Canada. Brown wrote his accounts of Sheppard and Gilmore approximately twenty years after their conclusion, but it is clear that his involvement in these cases was an important part of his long and varied career.

These two cases were not isolated incidents in antebellum Philadelphia. In the decades preceding the Civil War, Philadelphia courtrooms were once again the battlegrounds of declaring independence. However, very few cases attracted the extent of press coverage that the two Marys received. While the two women shared a few characteristics, such as light skin, their most important similarity may be their defense attorney—David Paul Brown. Raised as a Quaker, he was known for his fervent belief in abolition. The image of the kneeling female on the pitcher connects directly to some of his most prominent fugitive slave cases in Philadelphia. Whether the image was chosen specifically for him is unknown, but the gift clearly resonates with his work. In his reflections on receiving the award, Brown called the ceremony a highlight of his career. An account from the reception notes that it was attended by many from Philadelphia’s African American community, indicating the respect he earned from them through years of service. A testimony of gratitude is found in Mother Bethel AME Church’s papers, stating:

Last fifth day afternoon, we had the pleasure of witnessing the presentation of a pair of elegant silver pitchers to David Paul Brown by a large number of the colored people of this city, in testimony of their gratitude for his services to the cause of freedom and humanity in his many gratuitous efforts as an advocate before the courts for those whom the oppressors claimed as fugitives from the Southern house of bondage.

The silver pitcher served as a symbol of commitment to the idea of independence and reveals a city that carefully navigated racial lines and continued to debate the idea of freedom. It represents the continued narrative of claiming liberty that occurred in Philadelphia throughout the nineteenth century.

Text by Kelly Weber, who earned a B.A. in history at Saint Joseph’s University and M.A. at Villanova, with a concentration in Public History and nineteenth- and twentieth-century America. She teaches high school at Country Day School of the Sacred Heart in Bryn Mawr, Pa.