This souvenir Barbie doll dates from the 2000 Republican National Convention in Philadelphia. All delegates to the late August convention received a gift bag that included a box of elephant-shaped Kraft Macaroni and Cheese, a beanie baby, and one of four different versions of Barbie, all dressed in the same red suit. These four dolls, which were specially made and donated by the Mattel Corporation, included a traditional blonde Barbie, a Latina version with brunette hair, an Asian-American Barbie with black hair, and this African American version of the doll.

The first Barbie doll, blonde and blue-eyed, was produced in 1959. Almost a decade passed before the Mattel Corporation added an African American version. From the 1970s through the 1990s, the company continued to face criticism for the relative lack of diversity in its line of Barbie dolls. This may explain why Mattel donated such diverse dolls to the 2000 Republican National Convention delegates as well as to the Democratic National Convention delegates who met in Los Angeles weeks earlier. 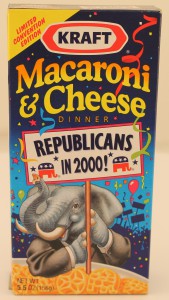 For the Republicans, diverse Barbies in the delegate gift bags aligned with a desire to portray the party as a “Big Tent.” Republicans had first invoked the phrase in 1989, partly as a way of rebutting criticism of racially tinged television attack ads aimed at 1988 Democratic nominee Michael Dukakis (b. 1933). This doll, therefore, represents a much larger effort on the part of the Republican Party to reach out to women and minority groups during the 2000 election cycle. Ultimately, however, the nominee George W. Bush (b. 1946) was elected in one of the closest races in American history by a coalition dominated by whites (55 percent of whom voted for the Republican candidate) and men (54 percent).  Nationally, 44 percent of women, 41 percent of Asian-Americans, 35 percent of Hispanics, and 9 percent of African Americans voted for Bush. The choice to hold the convention in Philadelphia seems to have had little  impact on the outcome in Pennsylvania, where Democrat Al Gore (b. 1948) prevailed.

Republican delegates received their commemorative dolls in red boxes while the Democratic delegates’ boxes were blue–the emblematic colors of the parties—but the dolls themselves were identical. The sign held by the Barbie includes only the words “Convention 2000” and universal red, white, and blue colors, and Barbie’s badge (easily seen by rotating the image above to the right and enlarging it) lacks a party affiliation. The lack of differentiation between Republican and Democratic Barbies, as well as their Caucasian feminine features, reflect major party politics in this period. Many Americans in 2000 complained that few ideological differences existed between Democrats and Republicans, especially after the primary defeats of Bill Bradley (b. 1943) and John McCain (b. 1936). Some opted to support the third-party candidacy of Ralph Nader (b. 1934), who garnered nearly 3 percent of the popular vote.

With gold earrings and long straight hair, the doll might also be interpreted as reinforcing traditional gender roles and suggesting Caucasian features as the norm for politically active women, regardless of party affiliation. In this regard the doll did not reflect the realities of political difference between the two major parties in 2000, when the Democratic Party platform focused extensively on the need to increase economic and political opportunities for both women and minorities but the Republican Party platform had little to say about issues of gender and race.

Text by Levi Fox, a Ph.D. candidate in public history at Temple University and former Allen F. Davis fellow at the Philadelphia History Museum at the Atwater Kent.