The rust and corrosion visible on the surface of this artifact give us a clue to its age. Buried for centuries, this helmet was left by some of the earliest European explorers of Pennsylvania. But who owned it, and why did he come to the New World?

This Swedish steel helmet, found in 1873 near the Susquehanna River in Washington Boro, Lancaster County, dates to the mid- to late seventeenth century, when Swedish and Finnish colonists settled in the Delaware and Susquehanna River valleys. The helmet is a type commonly referred to as a “morion” or pike-man’s pot, variations of which were popular in Europe from the mid-1600s to early 1700s. The story of its journey to North America begins in Sweden, with King Gustav II (1594-1632).

King Gustav II, also known as Gustavus Adolphus, ruled Sweden from 1611 to 1632. He is credited with modernizing the Swedish state and making the country a major force in European politics. At the time of his ascension to the throne, Sweden was at war with Denmark, Poland, and Russia. Drawing on his extensive education in the science and philosophy of warfare, as well as history, engineering, and European languages, Gustav developed a systematic approach to mobilizing and managing troops.

One of Gustav’s many reforms concerned the production of arms and armor. In the early seventeenth century, arms were made by individual blacksmiths, while armor was made in the state armory at Arboga. In 1620, Gustav moved the best blacksmiths into large cities and towns and added several new armories to increase the supply of equipment to his armies. He also introduced the pot style of helmet for use by pike-men, or foot soldiers who carried long, thin spears. The helmet unearthed in Pennsylvania was crafted by a Swedish blacksmith operating in one of Gustav’s workshops. 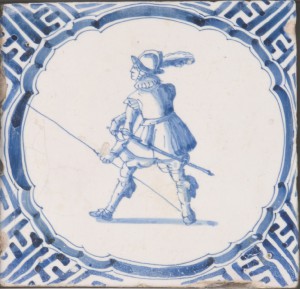 This earthenware tile, made in the Netherlands c. 1625-60, depicts a pike-man’s armor, including the pot-style helmet. (Philadelphia Museum of Art)

The pike-man’s pot helmet was named for its distinctive appearance, likened to an upside-down metal cooking vessel. It was constructed out of two rounded steel pieces, forged together in a raised comb that ran the length of the helmet’s peak. A down-turned brim provided limited protection for the wearer’s face and neck. These pot helmets were made and used across Europe and sent with explorers, soldiers, and colonists to the New World. This example from the Philadelphia History Museum matches Swedish pike-man pot helmets, having a short comb and a row of raised circles added to resemble the rivets that held together earlier metal armor pieces.

The helmet likely came to the shores of North America with Swedish colonists in the mid-seventeenth century. By the 1630s, the expansionist military policy of Gustav II resulted in an expanded Swedish sphere of influence, with territories in present-day Russia, Poland, Latvia, Estonia, and Germany. The logical extension of this success was to the New World. A group of Swedish, Dutch, and German stockholders formed the New Sweden Company and sent ships to North America in 1638. The company landed at mouth of the Delaware River later that year.

Swedish settlers in southeastern Pennsylvania primarily focused on obtaining furs and tobacco through trade, goods that they could sell for profit in Europe. They obtained land and interacted peacefully with local Native Americans for nearly two decades. About 600 Swedish and Finnish colonists traveled to the area around the Delaware River, though not all of them stayed. New Sweden was less profitable than shareholders had expected, and when the Dutch governor of New Amsterdam laid claim to the colony in 1655, it was turned over after limited local resistance.

The Dutch administration allowed the remaining Swedes a high degree of self-governance as a separate nation within their growing American empire. In 1681, when William Penn (1644-1718) received the patent for Pennsylvania from the English government, incoming Englishmen also incorporated the Swedes into their society. Capitalizing on their success in peaceful interaction with Native Americans, Penn utilized Swedish fur traders as interpreters in his negotiations with local Delaware and Susquehannock.

The steel helmet was likely brought to North America by a Swedish settler during the short life of the New Sweden colony. Over two centuries later, in 1873, John B. Staman (1841-1925) found the helmet at the Lancaster County location known as the Frey-Haverstick site,  occupied intermittently since the Middle Woodland period (1,000 B.C.-1,000 A.D.) and yielding artifacts dating between 3,500 B.C. and 1650 A.D. Several sources assert that the helmet was found with human remains in a Susquehannock cemetery, but the longevity of the site and the relatively remote date of its excavation in the late nineteenth century cast doubt on claims that the helmet was buried with a Native American. However, considering the friendly relationship between Swedish traders and the Susquehannock, it is possible that a Native American received the helmet in exchange for pelts or as a gift of goodwill.

This artifact is a reminder that Pennsylvania played an essential role in early-modern geopolitics. As Europeans competed to extend their spheres of influence farther across the globe, North America became a contested land. During the early colonial era, men and women from Sweden, England, and the Netherlands arrived along the shores of eastern Pennsylvania’s rivers. These immigrants hoped to prosper by settling fertile farmland and trading with Native Americans for goods to send back to Europe. The story of New Sweden illustrates how these people lived among each other and contributed to the ethnic fabric of the colonies that became the United States.

Text by Nina M. Schreiner, a graduate student at Edinboro University of Pennsylvania, where she studies the archaeology of colonial North America.