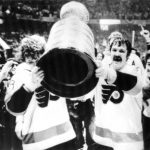 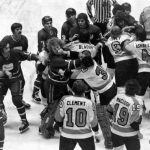 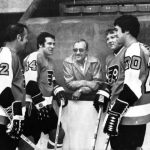 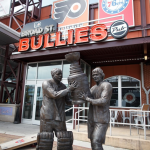 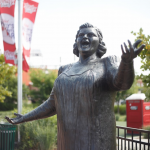 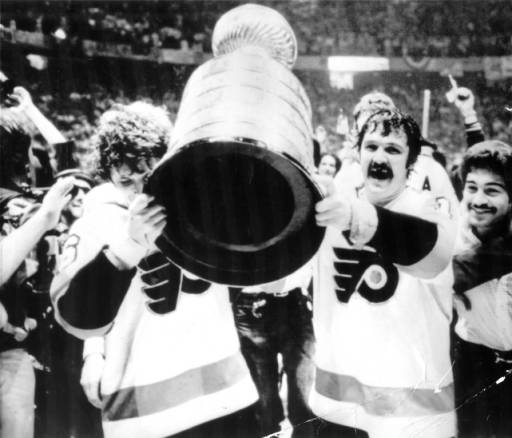 Clarke and Parent with Stanley Cup

Two of the most prolific Broad Street Bullies were Bobby Clarke and Bernie Parent. Clarke, the Flyers center forward during their Stanley Cup winning seasons, joined the Flyers organization in the 1969-70 season and spent his entire fifteen-year NHL career with the team. Clarke acted as the Flyers leader and captained the team for most of his career. Along with helping the Flyers win two Stanley Cups, Clarke also won individual awards, including the Hart Memorial Trophy for the player judged to be most valuable to his team in 1973, 1975, and 1976.

Parent was the Broad Street Bullies goalie and spent ten years with the team. Parent was also instrumental in winning the Flyers Stanley Cups, while also winning the Conn Smythe most valuable player trophy, in 1974 and 1975. Together Clarke and Parent were instrumental in bringing the Stanley Cup to Philadelphia and are remembered as two of the most prolific players to have ever worn the Flyers uniform. Parent was inducted into the Hockey Hall of Fame in 1984 and Clarke was inducted in 1987. 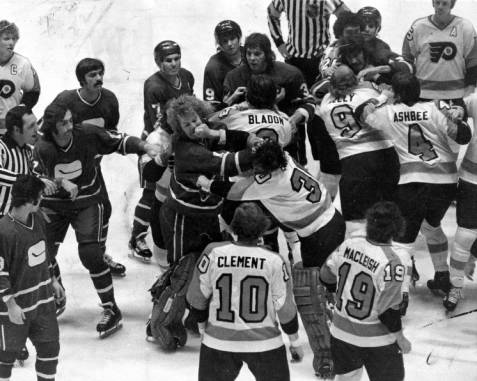 The 1972-73 Philadelphia Flyers received their “Broad Street Bullies” nickname for their rough play and record-breaking accumulation of penalty minutes. The nickname was christened following an away game with the Atlanta Flames on January 3, 1973. By the end of the game the Flyers squad had collected forty-three total penalty minutes, but had defeated the Flames 3-1. Coach Fred Shero credited the victory to his team’s physicality on the road, and the next day headlines of the Philadelphia Bulletin deemed the Flyers the “Broad Street Bullies.” The Flyers’ hard-hitting style carried over into their following Stanley Cup winning seasons, with players like Dave Schultz, who broke the record for penalty minutes in a single season (472 during the 1974-75 season), acting as enforcers on the ice. 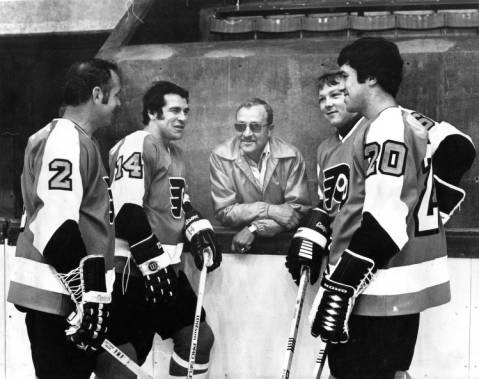 Coach Fred Shero had been a player in the NHL before arriving in Philadelphia to coach the Flyers in the 1971-72 season. Shero had played defensemen during his playing career, which included playing for the Flyers’ rival the New York Rangers. Shero took the Flyers to the Stanley Cup playoffs in six of the seven seasons he was head coach. Shero, nicknamed “Freddie the Fog,” achieved his greatest coaching accomplishment in the 1973-74 NHL season when the Flyers earned the franchise’s first-ever Stanley Cup Final victory over the Boston Bruins.

The next season (1974-75) the Flyers returned to the Stanley Cup finals with Shero at the helm, and once again captured the Stanley Cup by defeating the Buffalo Sabres. Shero’s last Stanley Cup final with the Flyers occurred during the 1975-76 season, where the “Broad Street Bullies” met the Montreal Canadiens, who swept the Flyers and ended the remarkable three-season winning streak. Shero eventually left the Flyers and joined New York Rangers as head coach in the 1978-79 season. For his legendary contributions to the Flyers organization, Shero was inducted to the Flyers Hall of Fame in 1990. Shero was also recognized for his coaching prowess and accomplishments in 2013, when he was inducted into the Hockey Hall of Fame. 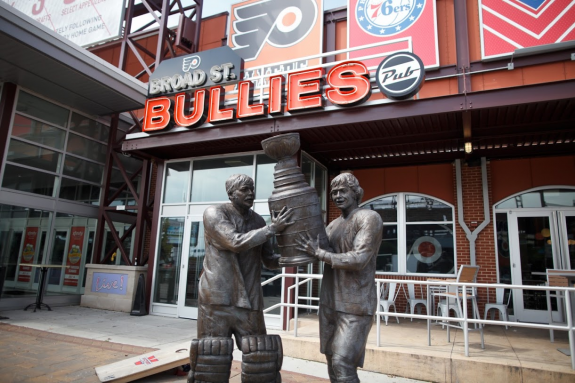 The golden age of Philadelphia Flyers hockey took place when the Broad Street Bullies captured back-to-back Stanley Cups in the 1973-74 and 1974-75 seasons. As of 2016, the Flyers had appeared in six other Stanley Cup Finals (1976, 1980, 1985, 1987, 1997, and 2010) and relocated from the old Spectrum to a new arena, known in 2016 as the Wells Fargo Center. Built where the Spectrum once stood, the Xfinity Live! entertainment complex honors the “Broad Street Bullies” with a pub of the same name, and statues of Flyers’ legends Bobby Clarke, Bernie Parent, and Coach Fred Shero. The pub at Xfinity Live! also displays Bullies memorabilia such as Stanley Cup banners, framed player pictures, and jerseys. (Photograph by Chase Epstein for The Encyclopedia of Greater Philadelphia) 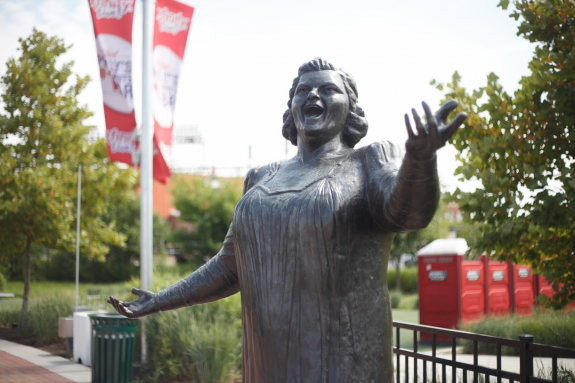 Singer Kate Smith, born in Virginia in 1907 and often called the “Songbird of the South,” became intertwined with Philadelphia Flyers lore for her rendition of “God Bless America.” Beginning in 1969, recordings of Smith singing the anthem were customarily played before Flyers games. Smith had become something of a good luck charm for Flyers fans, and on October 11, 1973, she appeared at the Spectrum arena for the Flyers 1973-74 season opener for a live performance of the song.

That season the Flyers went on to win the first Stanley Cup in franchise history, with Smith once again performing “God Bless America” in game six of the cup finals, in which the Flyers defeated the Boston Bruins to capture the cup. Smith was invited back to Philadelphia the next season (1974-75) to sing for the Flyers in game seven of the Stanley Cup semifinals, when the Flyers were battling the New York Islanders. The Flyers defeated the Islanders and went on to defeat the Buffalo Sabres in the final, capturing the franchise’s second Stanley Cup.

Fans and the Flyers organization had a great affection for Smith, and in 1987, a year after her death, a statue was erected outside the Flyers home arena, the Spectrum. When the Spectrum was demolished in 2010-11, Smith’s statue was removed but later restored to the vicinity when the Xfinity Live! entertainment complex was built. In the twenty-first century, the Flyers continued to honor Smith’s legacy, playing a video of her performing “God Bless America” before important games on the giant video screens of the Wells Fargo Center, which replaced the Spectrum as the Flyers’ home in 1996. However, the practice ceased and Smith's statue was removed in 2019 following concern over racist lyrics sung by Smith during the 1930s. (Photograph by Chase Epstein for The Encyclopedia of Greater Philadelphia) 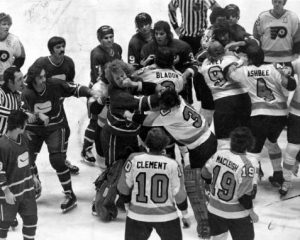 The Philadelphia Flyers, formed as a National Hockey League expansion team in 1967, became known as the Broad Street Bullies for their aggressively physical play during the 1972-73 season. As the Flyers racked up penalty minutes at a record pace, Philadelphia’s press corps tried to create a colorful nickname for the team. Jack Chevalier and Pete Cafone of the Philadelphia Bulletin called them the “Broad Street Bullies” following a brawling 3-1 victory over the Atlanta Flames, and the nickname stuck to the team also known for winning two Stanley Cup championships and for renditions of “God Bless America” by Kate Smith (1907-86) at home games.

Traditionally, the Flyers played a recorded version of Kate Smith singing “God Bless America” before the game, but she performed it live for the 1973 season opener. It proved to be a good omen, as the team finished with a 50-16-12 record. The Flyers defeated the Atlanta Flames, New York Rangers, and Boston Bruins to win the Stanley Cup in 1974, with Parent (who returned to the Flyers in 1972) winning the Conn Smythe Trophy as playoff MVP and the Vezina Trophy as the top goalie. Coach Fred Shero (1925-90) won the Jack Adams Award as coach of the year. The Flyers became the first expansion team to win the Stanley Cup, and two million people turned out for the parade down Broad Street to celebrate the victory. 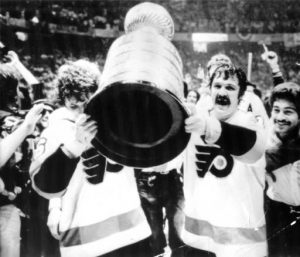 The following season, the Flyers finished with a 51-18-11 record, winning the division again. The Flyers defeated the Toronto Maple Leafs, New York Islanders, and Buffalo Sabres in the playoffs, as they secured their second Stanley Cup. This time, nearly 2½ million people turned out for the parade on Broad Street. Parent again won the Conn Smythe and Vezina Trophies, while Clarke won the Hart Trophy (MVP). The Flyers returned to the playoffs each of the next four years, but they failed to win the Cup, losing in the finals in 1976. After Dave Schultz was traded to the Los Angeles Kings in 1976 and coach Fred Shero left to become head coach and general manager of the New York Rangers in 1978, the Flyers were no longer the dominant intimidating team of the mid-1970s. The Flyers subsequently reached the Stanley Cup finals in 1980, 1985, 1987, 1997, and 2010.