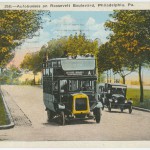 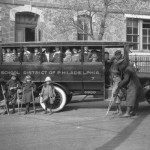 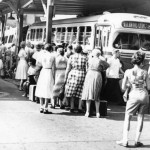 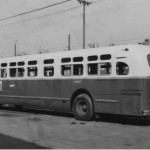 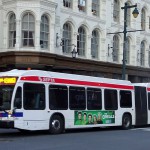 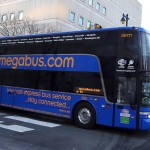 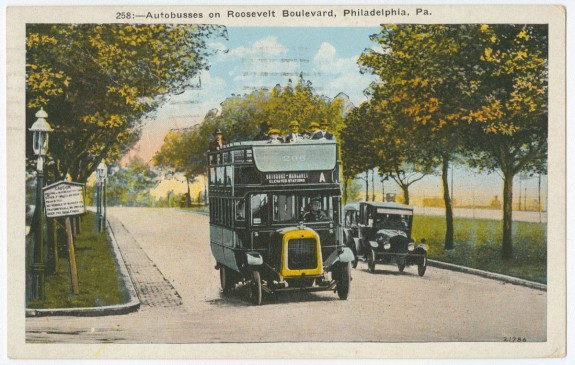 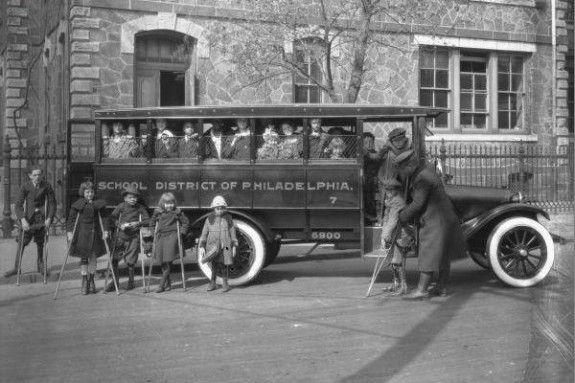 The bus here is identified in Philadelphia city archives as being a “public school omnibus for crippled children,” in this case students at Meade School at North Eighteenth and West Oxford Streets in North Philadelphia. The photographer was Julius Rosenberg, who has dozens of images from the 1920s in the city archives. 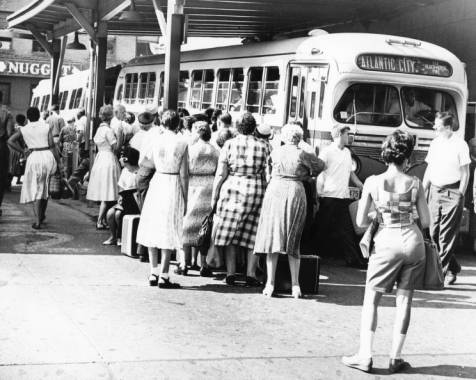 Autobus travel at first served to supplement or replace streetcars whose routes were restricted by rails within Philadelphia and its immediate area. Eventually autobus service grew to serve regional destinations. Free from the constraints of rails, motorized autobuses achieved wider geographic scope on the new or expanded roads and highways built for the region’s automobiles.

Besides the advantage to commuters, the broader bus service made it easier for urban residents to get out of town for recreation. In this photograph, probably from the 1940s or 1950s, Philadelphia residents are lined up at the old Union Bus Terminal at Thirteenth and Filbert Streets, waiting to board a bus bound for Atlantic City, sixty miles away on the New Jersey shore. 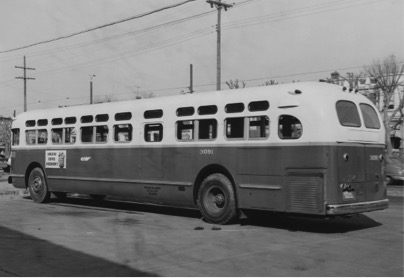 The 1956 bus in this photograph was called the Model TDH, made by General Motors Corporation and owned by the Philadelphia Transit Company, one of SEPTA’s forebears. Although there is nostalgia among transit buffs for this model bus—SEPTA refurbished one in 2011 for display purposes—the style eventually gave way to sleeker designs with bigger windows, with the aim of making public transit more comfortable and alluring to the public. 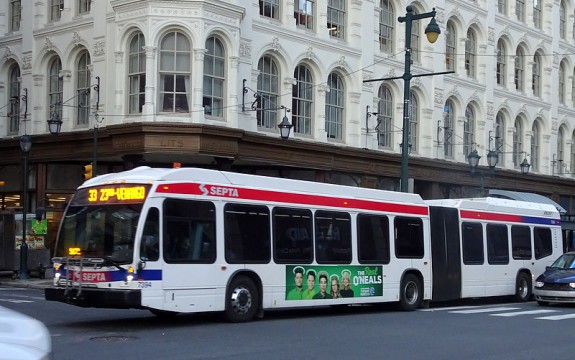 With ridership increasing and mounting concerns over fuel costs and emissions, in the early 2000s SEPTA and NJ Transit introduced hybrid autobuses intended to eventually replace their gasoline-powered fleets.

In this photograph from February 2016, one of SEPTA's hybrid diesel-electric articulated buses rolls up Market Street. The vehicles are designed to reduce greenhouse gases and provide better fuel efficiency, conserving energy and reducing fuel costs. (Photograph by Donald D. Groff for the Encyclopedia of Greater Philadelphia) 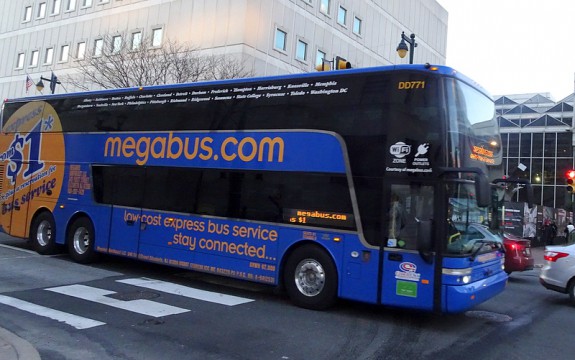 Private companies including BoltBus and Megabus began in the 2000s offering low-fare service between Philadelphia and other points along the Northeast Corridor. From its beginning, Megabus promoted itself as offering $1 fares between Philadelphia and New York — provided riders booked far enough in advance to secure one of the limited number of seats available at that rate. Like its competitors, Megabus offered free Wi-Fi and power outlets, appealing to its many customers who are constantly connected to the Internet by way of smartphones, laptop computers, and other portable devices. (Photograph by Donald D. Groff for the Encyclopedia of Greater Philadelphia)

Traveling on a still-rural portion of Roosevelt Boulevard in about 1926, a No. 206 bus carries passengers toward the Margaret-Orthodox station of the Market-Frankford El. (Library Company of Philadelphia)

Beginning in the 1920s, the Philadelphia region’s independent transit companies added motorized buses (autobuses) to their networks. Superior in comfort to the horse-drawn omnibuses of the nineteenth century and with more range and versatility than electric trolleys, autobuses offered passengers easier means to traverse the metropolitan area.

Prior to the internal combustion engine, mass transit relied on horse-drawn omnibuses (introduced in Philadelphia in 1833) and then streetcars, also called trolleys (introduced in the 1850s and electrified in the 1890s). With the automobile’s rising prominence following World War I, many of the private companies then serving the region’s commuters purchased gasoline-powered autobuses as a less-expensive alternative to maintaining the costly infrastructure necessary for streetcars. Free from the constraints of rails, motorized autobuses achieved wider geographic scope on the new or expanded roads and highways built for the region’s automobiles. 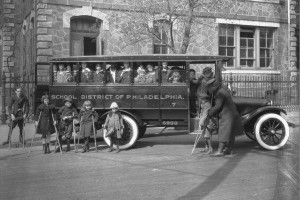 By the 1930s, Philadelphia students were driven to school in motorized buses like the one shown here, which was in use even earlier—this photograph is from 1923—for children with disabilities. The familiar yellow school bus did not appear until the 1940s. (PhillyHistory.org)

Interstate bus services also came to the region. In 1925, after a series of regional bus line mergers, the Mesaba Transportation Company (renamed the Greyhound Bus Company and incorporated in Wilmington) initiated interstate service in Greater Philadelphia. As a response to Greyhound’s growth, National Trailways launched regional interstate service in 1936. To accommodate the transit needs of South Jersey residents commuting to Philadelphia, New York, and other points, Trailways in 1964 initiated service from Mount Laurel, New Jersey; Greyhound commenced service there in the mid-1980s. After the legalization of casino gaming in Atlantic City in 1978, bus companies eager to capture gamblers began daily service, often with discounted fares, from Philadelphia, Wilmington, and Trenton to the resort city. 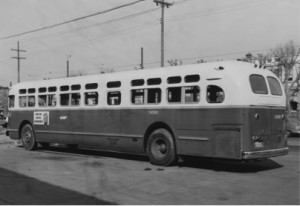 When this city bus was plying Philadelphia streets in 1956, the growth of suburbs and private car ownership had begun to undermine demand for mass transportation. (Historical Society of Pennsylvania)

Buses put an end to many of the region’s trolley lines. By the late 1940s, both Camden and Wilmington had replaced nearly all their trolleys in favor of autobuses. Many of Philadelphia’s trolley lines were replaced with buses starting in the late 1980s. In 1992, the city’s Route 23 trolley, once the world’s longest and running from South Philadelphia to Germantown, was suspended and replaced with diesel-powered buses. By 2015, the Route 23 bus ranked as the city’s third-busiest transit line, prompting SEPTA to split the route in two. With these mergers and upgrades, autobus lines ultimately provided transportation within and between nearly every area municipality. 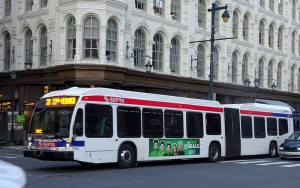 Though lacking the romance of trolleys and the individual freedoms of the automobile, public and private autobuses provided many in the Greater Philadelphia area with affordable and accessible transportation.

Stephen Nepa teaches history at Temple University, Rowan University, and Moore College of Art and Design and appears in the Emmy Award-winning series Philadelphia: The Great Experiment. He received his M.A. from the University of Nevada, Las Vegas, and his Ph.D. from Temple University.