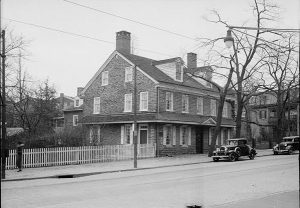 The Johnson house, a Quaker home, figured prominently in the anti-slavery movement and the Underground Railroad. The photograph was taken after 1933. (Library of Congress)[/caption]

The recently closed YWCA, long a leading institution since its inception in 1917, has sparked research into its influence, particularly efforts to foster inter-racial programs for young people and to coordinate efforts between its white and black branches. The YWCA was instrumental in creating collaboration among institutions in the star-studded “Negro Achievement Week” in 1928. This event, a forerunner of Black History Month, brought artistic and cultural leaders from the African American community to Germantown at a time of great racial volatility due to a large presence of the Ku Klux Klan. Such events are now being explored in the traditional historical community in ways that expand the memory infrastructure to include examination of the lives of all Germantown’s residents.

David W. Young is a lecturer at University of Pennsylvania Graduate Program in Historic Preservation and Executive Director at Cliveden House in Historic Germantown.