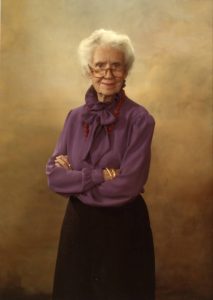 Maggie Kuhn founded the Gray Panthers in 1970 after being subject to mandatory retirement at her previous job. Kuhn urged older people to “get out of their rocking chairs and into public affairs.” (Special Collections Research Center, Temple University Libraries)[/caption] 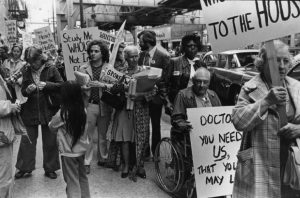 Like other social movements of the twentieth century, the Gray Panthers engaged in street demonstrations and pickets. In this photograph from June 1974, Gray Panthers protest outside the American Medical Association’s convention in Chicago. (Special Collections Research Center, Temple University Libraries)[/caption]

The Gray Panther networks served as gatherings where older, predominantly white middle-class Americans came together to critique society’s social, economic, and cultural expectations of the aged, redefine old age, and be empowered. Indeed, older Americans challenged the social and cultural expectations of older people in various spheres, eschewed images of the aged as static, traditional, and sedentary individuals, and fought to create a new image of older Americans as dynamic, productive, and a necessary component of American society.