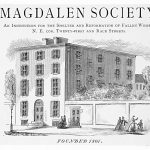 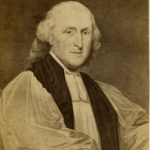 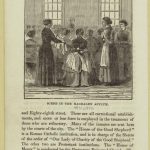 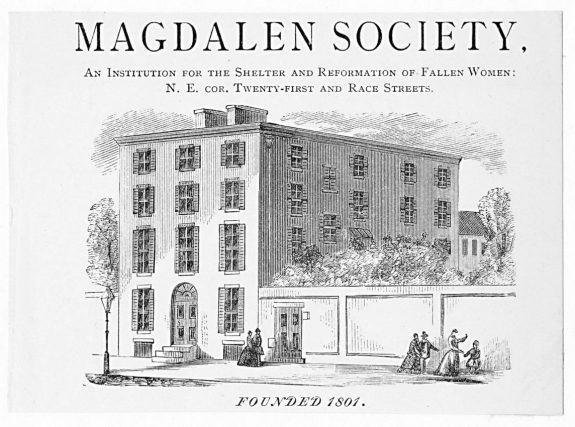 Founded in 1800, the Magdalen Society was located at Race Street and Schuykill Second Street, later named Twenty-First Street. In the early nineteenth century, the area was remote enough that the home for “fallen women” was not too close to residential areas. Behind the main building, which is featured in this 1910 print, a series of out buildings completed the Society’s campus and took up roughly a city block. An eleven-foot wall around the perimeter kept the prying eyes of city dwellers out and simultaneously kept the committed women in. 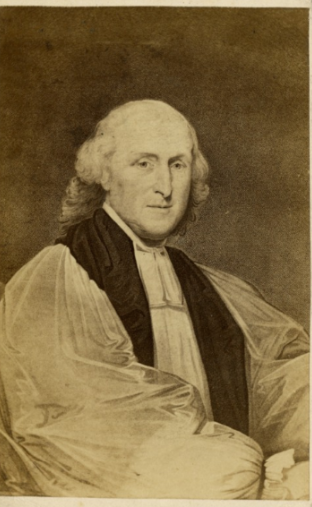 William White (1748-1836) was born in Philadelphia and received his Bachelor’s and Master’s degrees from Philadelphia College, later known as the University of Pennsylvania. Although he traveled to England to be ordained in the Episcopal Church, White lived in Philadelphia for the majority of his life. First an Episcopal deacon, then priest and finally bishop, White believed that religious education and devotion could cure society’s problems. In addition to founding the Magdalen Society, the bishop raised funds to start a school for black and Native American children, helped create the Pennsylvania School for the Deaf, and was the first president of the Pennsylvania Society for Alleviating the Miseries of Public Prisons. 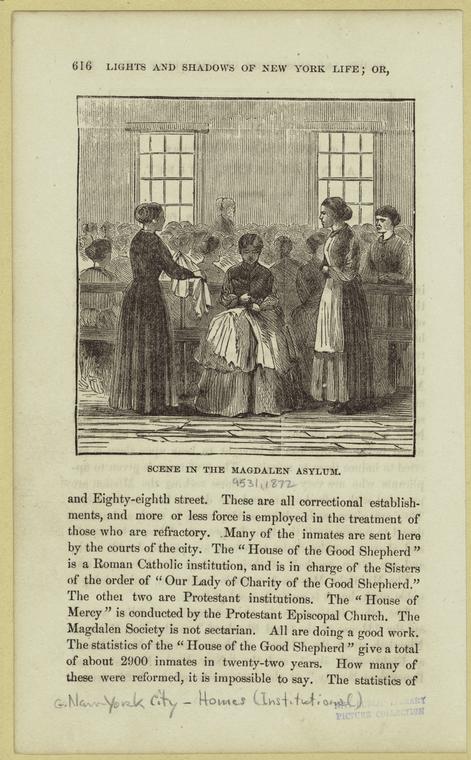 Philadelphia was the first, but not the only, city with an institutional home for prostitutes and other “fallen women.” This page from the 1872 book Lights and Shadows of New York Life highlights a variety of correctional establishments. The excerpt notes that “...more or less force is employed in the treatment of those who are refractory. Many of the inmates are sent here by the courts of the city.” The text later notes, “All are doing a good work.”

Magdalen Societies or asylums in cities across the United States purported to care for and reform society’s lower-class women through prayer and discipline, although as this excerpt admits, “how many of these were reformed, it is impossible to say.” 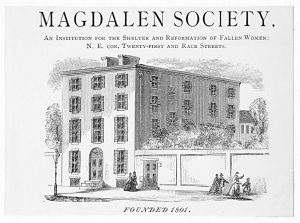 Like the changing attitudes of society itself, the Magdalen Society evolved over the years. In 1847, the Rosine Association for Magdalens was founded by women of Cherry Street Friends’ Meeting and the First Unitarian Church presided over by the Reverend William Henry Furness (1802-1896). It served as a place where delinquent young girls could be taught respectable trades. The new association took a different tack from the existing Magdalen Society, both because its founders objected to the latter’s supervision by men and because they considered its approach to be repressive. Philadelphia’s Rosines insisted on female management, both at the policy-making level and in the daily supervision of the institution, promising sympathy and the example of “respectable” women to the inmates. The Rosine Association determined that the “girls” needed marketable skills and training in household management, so their approach included education and even some free time, with no emphasis on moral regeneration.

In 2011, White-Williams Scholars merged with Philadelphia Futures, a nonprofit organization providing Philadelphia’s low-income, first-generation-to-college students with the tools, resources, and opportunities necessary for admission to and success in college. So the seed planted in the 1800s in an effort to reform and educate prostitutes, Philadelphia’s “fallen women,” continued to evolve, bearing entirely new benefits in another era.

Marie A. Conn is Professor of Religious Studies at Chestnut Hill College in Philadelphia. She holds a doctorate in Theology from the University of Notre Dame. Her books include C. S. Lewis and Human Suffering: Light among the Shadows, and Noble Daughters: Unheralded Women in Western Christianity, 13th to 18th Centuries.

Katz, Michael B. In the Shadow of the Poorhouse: A Social History of Welfare in America. New York: Basic Books, 1986.