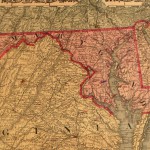 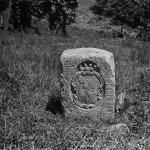 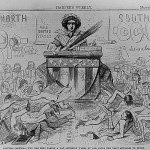 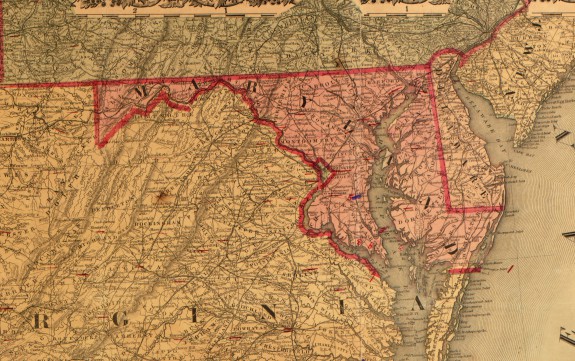 This detail from a map of the Southern states by J.H. Colon (1800-93) is from 1861 and shows a complete view of the Mason-Dixon Line—the long horizontal line and the vertical line that drops from its right end—as well as the other borders of pink-shaded Maryland. Though many associate the Mason-Dixon Line with the Confederacy and the South, Maryland was a border state and never formally seceded from the Union. Delaware, to the east of Maryland and also below the Mason-Dixon Line, followed a similar path. Maryland’s border with Virginia is a more accurate delineation between the Northern and Southern states. In 1863, two years after the creation of this map, West Virginia broke from the rest of Virginia to become a border state, while the bulk of Virginia seceded from the Union and joined the Confederacy. 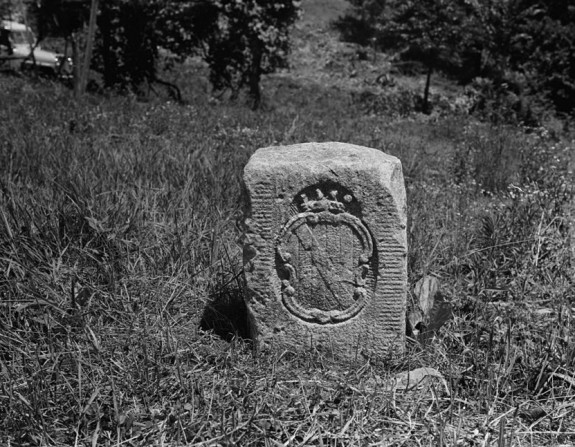 Crossing borders between U.S. states is often uneventful, marked only by a road sign or the appearance of a visitors center. But for those traveling among Maryland, Pennsylvania, and Delaware, crossing the state line often carries a larger significance. When the Mason-Dixon Line was first surveyed in the eighteenth century, small stones placed every mile and larger stones, called crownstones, every five miles, demarcated the line. In the twenty-first century, many of the stones have eroded away or been buried, but some are still visible and a handful have been preserved. This photograph shows a crownstone in Zora, Maryland. The Maryland side of the stones was engraved with the seal of the second Lord Baltimore, seen here, and the Pennsylvania side showed William Penn’s coat of arms, so travelers might know upon what side of the famed line they stood. 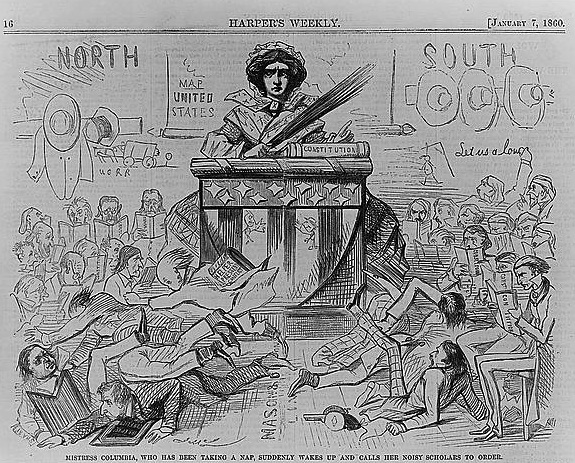 A political cartoonist captioned this, “Mistress Columbia, who has been taking a nap, suddenly wakes up and calls her noisy scholars to order.” Northern and Southern congressmen flank both sides of the image, and some seem to have been fighting across the dividing line between them marked “Mason & Dixon.” As with Columbia, personified often in cartoons as a woman upholding justice, the Mason-Dixon Line became a motif of political drawings during the Civil War and beyond. Though the line is not the actual divider between the Northern and Southern states, popular belief to the contrary has secured this role in the public’s memory.

By Cameron B. Strang 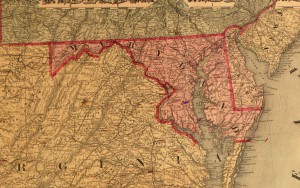 This detail of a map of the Southern states by J.H. Colon (1800-93) was created in 1861 and shows a complete view of the Mason-Dixon Line—the long horizontal line and the vertical line that drops from its right end—as well as Maryland’s jagged western border. (Library of Congress)

During the antebellum era, Americans began to identify the Mason-Dixon Line as delineating the northern and southern sections of the United States. But the line was never a clear boundary between a world where slavery ruled and one where freedom rang. Various forms of free and coerced labor existed along both sides of the line and southern slave owners maintained the legal right to recover enslaved blacks who fled north of the 39º43ˊ parallel. Although many whites in Maryland, Delaware, and even Philadelphia sought to preserve racial slavery, the proximity of the line and the freedom it promised to runaway slaves forced planters in Maryland and Delaware to experiment with a wide variety of labor regimes. By 1860, large landowners in Maryland and Delaware had become far less dependent on slave labor than those in the Lower South and, ultimately, unwilling to join the confederacy, a crucial factor in the North’s eventual victory. For many Americans, the line has remained the iconic boundary between Northern and Southern cultures.

Cameron B. Strang is an Assistant Professor of History at the University of Nevada, Reno.

Cope, Thomas D. “Degrees Along the West Line: The Parallel between Maryland and Pennsylvania.” Proceedings of the American Philosophical Society, vol. 94 (1950), 260-8.

Danson, Edwin. Drawing the Line: How Mason and Dixon Surveyed the Most Famous Border in America. New York: Wiley, 2008.

Strang, Cameron B. “The Mason-Dixon and Proclamation Lines: Land Surveying and Native Americans in Pennsylvania’s Borderlands.” The Pennsylvania Magazine of History and Biography, vol. 136, no. 1 (Jan. 2012), 5-23.

Minutes, 1754-1762, of the commissioners for determining the line between Pennsylvania and Maryland, American Philosophical Society, 104 Fifth Street, Philadelphia.

The “Post Mark’d West,” the initial point of the Pennsylvania-Maryland boundary that Mason and Dixon established in 1764. White Clay Creek State Park, Del.