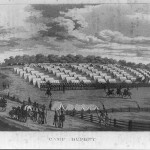 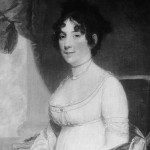 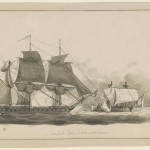 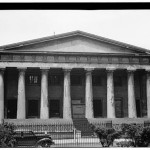 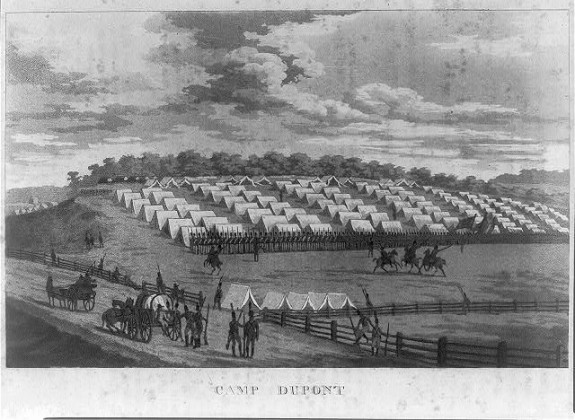 This lithograph shows an unknown artist’s rendering of Camp Dupont, a War of 1812 camp for Pennsylvania volunteers above the Brandywine River near Wilmington, Delaware. Near the main tent array, troops drill on foot, perform mock battles on horseback, and exercise their mounts. In the foreground, on the dirt road along the fenced encampment, a man and supply wagon are stopped by sentries as a carriage travels in the opposite direction. Camp Dupont was organized on Oak Hill in the spring of 1814 in response to the threat of British attack on the Dupont gunpowder mills. The militia was largely comprised of volunteers from Philadelphia. (Library Company of Philadelphia) 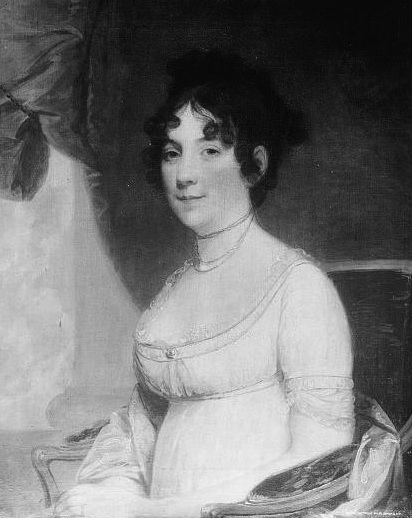 First Lady Dolley Madison (1768-1849), a Philadelphia resident before her marriage to James Madison, had a key role in one of the most storied events of the War of 1812. Just before the enemy’s arrival in August 1814, she ordered the removal of a Gilbert Stuart painting of George Washington from the White House, saving it from almost certain destruction.

Like the painting of George Washington, this painting of Dolley Madison is the work of Gilbert Stuart (1755-1828), who painted Washington in 1796 and Madison in 1804—a decade before the attack on the White House.

The subsequent conflagration of the federal buildings opened the possibility of temporarily returning the capital to Philadelphia, but the House of Representatives defeated a bill including the provision by nine votes. 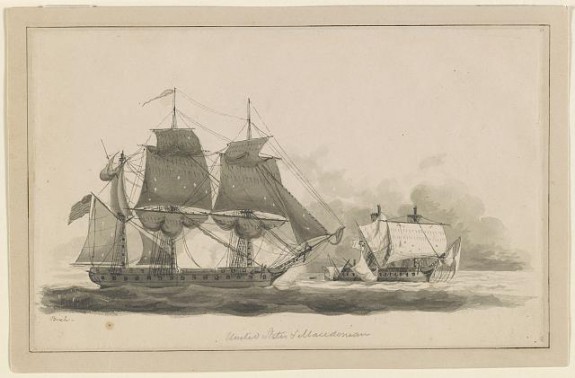 Philadelphia had been the construction and launching site in 1797 of the USS United States, one of the six original capital ships authorized by the Naval Act of 1794. The frigate had tested its mettle during the Quasi-War with France before going into action in the War of 1812. On October 25, 1812, under the command of Commodore Stephen Decatur (1779-1820), the United States achieved a dramatic victory over HMS Macedonian off the coast of Madeira, Portugal. That triumph, as well as other U.S. naval victories, provided badly needed publicity for the administration of James Madison, which was flailing after America’s disastrous attempt to invade Canada that summer. Here, Thomas Birch (1779-1851) has sketched a pen and ink drawing of the battle. 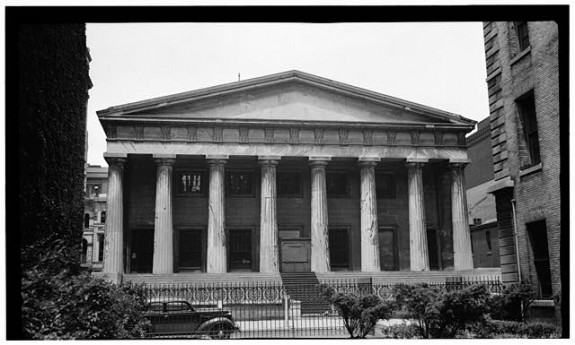 The expense of the War of 1812 and damage to commerce dealt the U.S. economy a crippling blow. In 1816, in an effort to overcome the financial problems, the government rechartered the national bank, whose original charter had expired in 1811. The Second Bank of the United States began operating in Carpenters' Hall on Chestnut Street in 1816. In 1824, it moved into an impressive new Greek Revival structure, also on Chestnut Street, designed by architect William Strickland (1788-1854). The Second Bank, depicted here in a 1939 photograph for the Historic American Buildings Survey, was federally chartered for only twenty years. However, the building survived and still stands between Fourth and Fifth Streets in center city.

The building ceased to function as a bank in 1836 after President Andrew Jackson vetoed Congress’ 1832 rechartering of the bank. In the twenty-first century, the bank building is part of Independence National Historical Park and houses a portrait gallery. 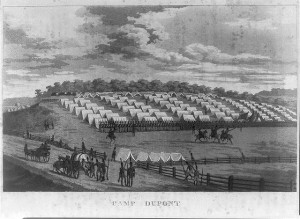 Camp Dupont was organized on Oak Hill in the spring of 1814 in response to the threat of British attack on the Dupont gunpowder mills. (Library of Congress)

Philadelphia-area residents from all economic and social backgrounds participated in the war effort. Many who joined militias fought in campaigns in the western territories, Niagara Theater, and Chesapeake region. A large number of the recruits were Irish immigrants who had recently arrived in East Coast cities like Philadelphia and were eager both to oppose the British and find opportunities to lift themselves out of poverty. On the home front, the yard of the Pennsylvania State House (Independence Hall) became an active place for drilling troops and gathering civilians for war-related labor. In 1814, when a British invasion of Philadelphia became a distinct possibility, African American businessmen James Forten (1766-1842) and Russell Parrott (1791-1824) used the yard for organizing more than two thousand free blacks to help strengthen fortifications at Gray’s Ferry on the Schuylkill River.

Despite the disaster at Washington, the war concluded with highly publicized American victories at Lake Champlain (September 11, 1814), Baltimore (September 14, 1814), and New Orleans (January 8, 1815), giving Americans reason to believe that they had won the contest against Britain. This point continues to be debated, but one certainty is that the United States stumbled out of the war in the throes of one of the worst inflationary crises in its history. The expense of the conflict and damage to commerce had dealt the economy a crippling blow from which it would take years to recover. In 1816, in an effort to solve the dilemma, the government rechartered the national bank, which had ceased to exist in 1811, and once again chose Philadelphia as its residence. Later that year, the Second Bank of the United States began operating in Carpenters’ Hall on Chestnut Street. In 1824, it moved into another Chestnut Street home, an impressive new Greek Revival structure designed by architect William Strickland (1788-1854).

Paul Campbell is an M.A. candidate in American History at Temple University. He also works as a park guide at Independence National Historical Park, where he developed a War of 1812 tour of the Portrait Gallery in the Second Bank of the United States.

Dorwart, Jeffrey M., with Jean K. Wolf. The Philadelphia Navy Yard: From the Birth of the U.S. Navy to the Nuclear Age. Philadelphia: University of Pennsylvania Press, 2001.

Hickey, Donald R. The War of 1812: A Forgotten Conflict. Urbana and Chicago: University of Illinois Press, 1989.

Sapio, Victor A. Pennsylvania and the War of 1812. Lexington: University Press of Kentucky, 1970.