During the American Revolution, Loyalists, or “Tories” as Patriots called them, included prominent Pennsylvania political and religious leaders as well as many less affluent individuals from the state’s Quaker and German pacifist communities. A large number of “neutrals” also struggled with increasing difficulty to remain uninvolved in the conflict. Religion, ethnicity, economic status, ... 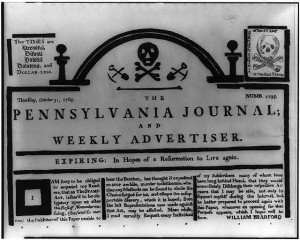 The Stamp Act of 1765, the first direct tax ever imposed by the British government on colonial Americans, inadvertently provoked a ten-year clash of wills between Britain and the colonies that led to the American Revolutionary War. During this Revolutionary Crisis period (1765-75), colonists resisted imperial taxes and other Parliamentary innovations with protests and with boycotts of British ...