Privately run but publicly funded charter schools became an important part of the educational landscape in Greater Philadelphia by the beginning of the twenty-first century. Their advocates across the country argued that they were an antidote to politicized and unwieldy public school systems and a way to move decision-making out of the hands of government bureaucrats and into those of educators, parents, and community leaders. However, charter schools were controversial for a number of reasons.

Like public schools, charters were tuition free and (theoretically) open to all students. However, they were exempted from most government regulations and had to compete with traditional public schools and other charters for students. Theories of choice and competition were central to the charter school movement. Many proponents argued that the public school “monopoly” was bad for students and that charter schools, by infusing market dynamics into the educational domain, promoted more innovative and responsive schools.

In 1991 Minnesota was the first state in the country to pass a law authorizing charters. New Jersey and Delaware passed charter school bills in 1995, and Pennsylvania followed suit in 1997. As in other areas, charter schools in the region were generally a response to urban school failure and were uncommon in suburban and rural areas. Indeed, over half of all the state’s charters were in Philadelphia as the school year began in the fall of 2016, while only five were in the suburban school districts in the four Pennsylvania counties surrounding it. Similar patterns appeared in Chester and Camden.

Charter schools immediately generated controversy, with proponents claiming that they provided important options to students trapped in failing schools and critics maintaining they took resources and students away from public school districts and increased race and class segregation. Republican lawmakers (especially at the state level) championed charter schools, viewing them as a way to counter the power of teachers unions, but even some Democrats also supported them.  For example, Pennsylvania State Representative Dwight Evans (b. 1954) saw charter schools as a way to increase school choice for his African American constituents in Philadelphia.

The first charter schools in Philadelphia opened in 1997. The number of charters rose from a handful at first to eighty-four by the fall of 2016, serving approximately 30 percent of the students in Philadelphia. Philadelphia had one of the highest proportions of students in charters in the country, behind only New Orleans, Detroit, Washington, D.C., and Cleveland. Theoretically, charter schools were accountable to the authorizing district, which had the right to close the schools if they did not live up to the terms of their charters. However, Pennsylvania’s charter school law included limited mechanisms for oversight and accountability, and only a handful of charters were closed due to poor student performance or financial mismanagement.

Charter schools in Philadelphia varied widely in mission and program. Some focused on particular cultural heritages, others on workforce development or at-risk populations; still others aimed to provide highly academic, college preparatory experiences. Charters also played a central role in School District of Philadelphia Superintendent Arlene Ackerman’s  (1947-2013) reform effort, launched in 2010. Called the “Renaissance Schools Initiative,” the strategy aimed at quickly improving outcomes in some of the city’s lowest-performing schools. As a part of this initiative, seven traditional public schools in the city with especially poor outcomes were turned over to charter providers (with more to come in the following years). Selected providers included Mastery Charter, which ran a network of “no excuses” schools with high expectations for low-income students.

Like charters across the country, some Philadelphia charters produced better student achievement outcomes than traditional public schools, some produced the same, and some produced worse. Such high levels of variation made it difficult to draw absolute conclusions about relative student performance, but, in general, charter schools in the district did not outperform their traditional counterparts. Despite their mixed results, charter schools were popular; parents appreciated having the freedom to choose, and charters were often seen as safer. Scandals involving mismanagement and even fraud did little to discredit them.

Charter Schools and the Funding Crisis

Funding for charter schools in Pennsylvania came from the students’ original districts, with the amount determined by a state formula that distinguished between regular education and special education students. This formula was especially problematic for the School District of Philadelphia given its already low per-pupil spending, inadequate financial support from the state, and large numbers of English Language Learners and special education students who needed additional services. For each student, the district was required to send approximately 70 percent of that year’s per-pupil cost from the district to the receiving charter; each special education student in a charter cost the district significantly more (nearly 180 percent of the per-pupil cost). This plan was designed to leave the sending district some money for fixed expenses, while directing the bulk of each student’s funding to the school he or she would attend. The result, however, was a significant drain on the district’s budget, especially because charter schools served fewer English Language Learners and high-needs special education students, which left district-run schools responsible for educating a costlier population. A state subsidy intended to help districts offset some of the costs of charter schools was eliminated in 2011, further exacerbating the district’s funding problems.

By 2012, the shift of students and funds to charters forced the district to close dozens of schools, generally those with declining student populations located in high-poverty areas. Some parents and politicians blamed charters for these austerity measures. Critics also argued that the district moved many students from closing schools to those with worse achievement records and that its decision to shutter schools discounted local traditions, undermined social bonds, and left certain neighborhoods bereft of functional institutions.

The School District of Philadelphia was not the only school district in southeastern Pennsylvania affected by the rise of charters. Half of the students in the Chester-Upland School District attended them. Most were enrolled in Chester Community Charter School (CCCS), the largest in the state. CCCS was a for-profit school that attracted attention not only for the close ties between its founder, Gladwyne attorney Vahan H. Gureghian (b. 1955), and major Republican figures in the state but also for questionable financial dealings, including extravagant charges for special education.

One of the first charters in New Jersey, LEAP Academy, opened in Camden City in 1997. Operated in partnership with Rutgers University-Camden, LEAP originally served students in K-6th grades and later expanded into a K-12 school. Other charter schools followed in New Jersey, mainly in impoverished cities like Camden, where performance was low. By 2012, there were twelve such schools in Camden, the second-largest number for any city in the state. They served about 3,700 students; Camden’s public schools, on the other hand, enrolled 13,000.

With Camden school performance continuing to lag, the New Jersey legislature—prompted by State Senator Donald Norcross (b. 1958) and with the influential backing of his brother, South Jersey power broker George Norcross (b. 1957)—passed Renaissance school legislation, loosely modeled on the program by the same name adopted in Philadelphia in 2010. Providing both incentives to private investors, such as higher per-pupil subsidies than standard charters received, and greater flexibility in contracting for services, the program also aimed at strengthening neighborhoods by requiring that students live in local catchment areas designated by the school district.

Both traditional charters and Renaissance schools found strong supporters among community advocates. Academic outcomes, however, were mixed. A 2007 report by the Institute on Education Law and Policy at Rutgers University, the first of its kind, determined that on fourth-grade standardized tests for language and math, New Jersey’s charter schools performed worse on average than other public schools in the same district, although it also found that over time schools that survived review tended to show better results. In 2012 the Center for Research in Education Outcomes at Stanford University provided more encouraging statistics in both reading and mathematics for 2006 to 2011. Although critics expressed concern at the effect Renaissance schools in particular might have in draining students from traditional public schools, with the three Renaissance operators authorized to educate over nine thousand youth, the political weight behind the movement was strong and accelerating.

Beginning in the 1990s, charter schools helped reshape education in many parts of the Philadelphia metropolitan area. As the number of charters increased, it became more and more common for students to spend at least some of their school years in a charter.  Although they were largely intended to improve opportunities and outcomes for students who had been poorly served by traditional public schools, research on charter school outcomes was mixed. Nevertheless, charters continued to be politically popular and to attract large numbers of families seeking options they felt were safer and more personalized than district-run schools. Over the course of several decades, the rise of charter schools meant that in most urban areas of the Philadelphia region “school choice” had moved from slogan to reality.

Maia Cucchiara is an Associate Professor of Urban Education at Temple University. She is the author of Marketing Schools, Marketing Cities: Who Wins and Who Loses When Schools Become Urban Amenities (University of Chicago Press, 2013). (Author information current at time of publication.) 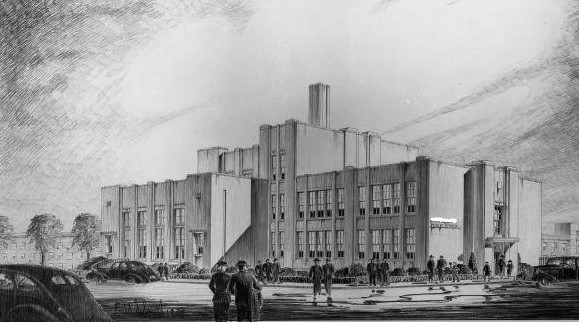 Frederick Douglass Elementary, located at 2118 West Norris Street in Philadelphia, was constructed in 1939. The school is now part of the Mastery Charter Schools network across Philadelphia and Camden, New Jersey. The elementary school educates children from kindergarten to fifth grade and in 2017 had 530 students enrolled. After completing their elementary education at Frederick Douglass, students can continue to Master Charter's Frederick Douglass Middle School and to the Simon Gratz Campus for high school.

Mastery Charter Schools began in 2001 as High Tech High in Philadelphia with 100 ninth-grade students. The school has grown since its founding to serve 13,500 students in the Philadelphia area. Mastery has transformed eight schools of various grade levels in the region into Renaissance Schools in keeping with the initiative of Arlene Ackerman during her tenure as superintendent of the School District of Philadelphia. In 2015, the District selected Mastery Charter to establish another Renaissance school at Frederick Douglass Elementary. 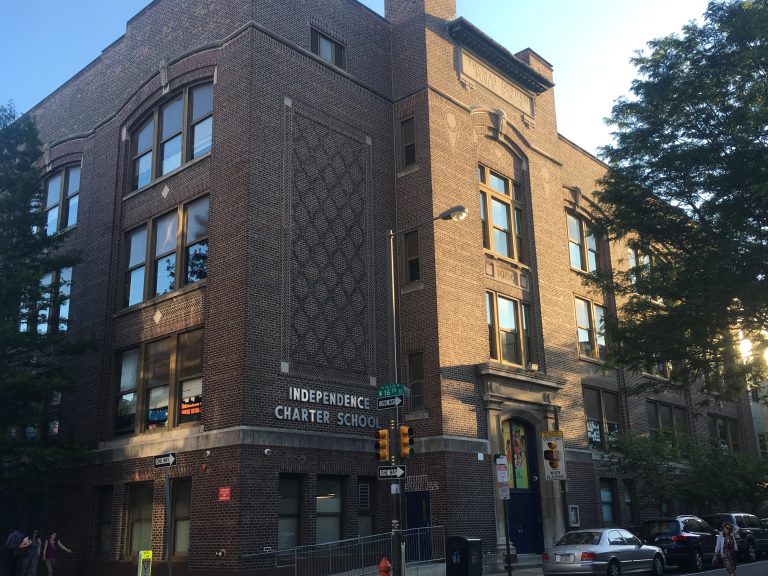 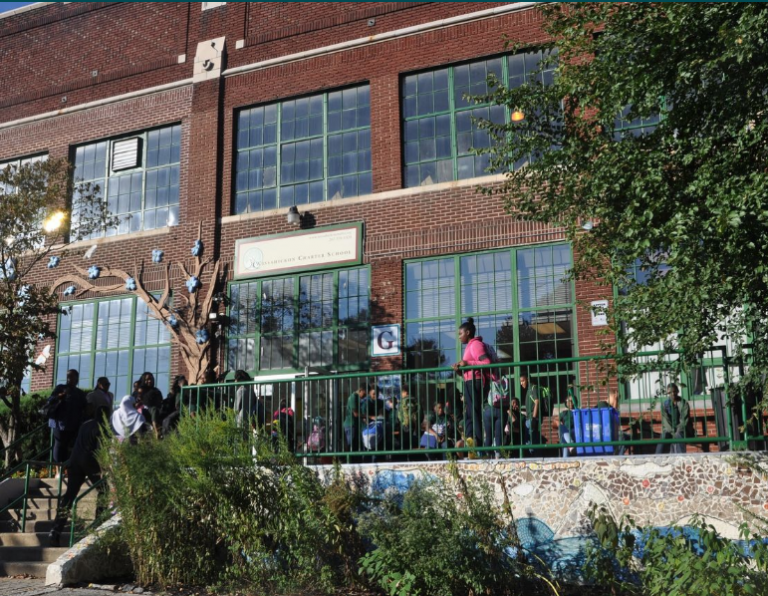 Wissashickon Charter School's Fernhill Campus serves 480 kindergarten through eighth grade students (in 2017). Built in 2002, the school features the artwork by students around its campus. Core aspects of the curriculum in support of the school's mission include art, technology, and environmental classes. 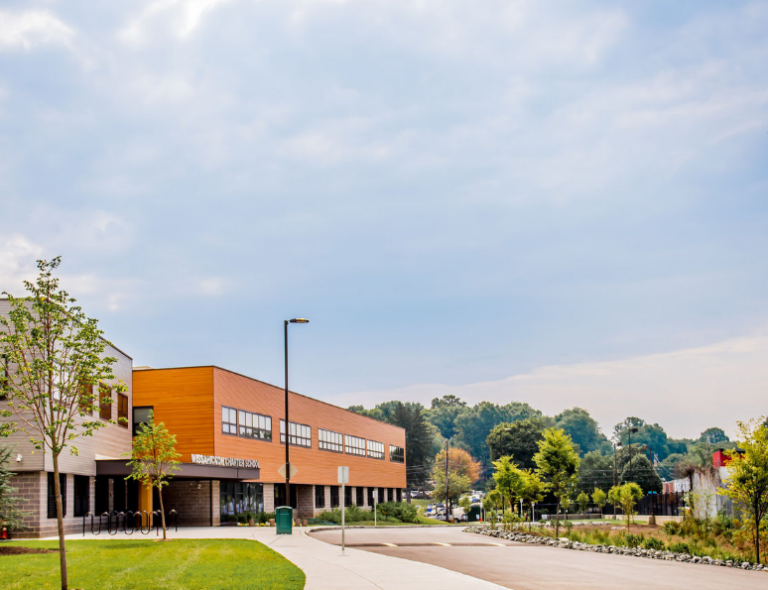 The Awbury Campus is Wissahickon Charter School's second location. The school first opened its Fernhill campus in 2002. Needing to accommodate more students, the charter school opened its second campus in East Mount Airy across from the Awbury Arboretum, shown here, in 2014. Both campuses included an area called "The Commons," where middle school students can meet before, during, and after school for studying and group work. 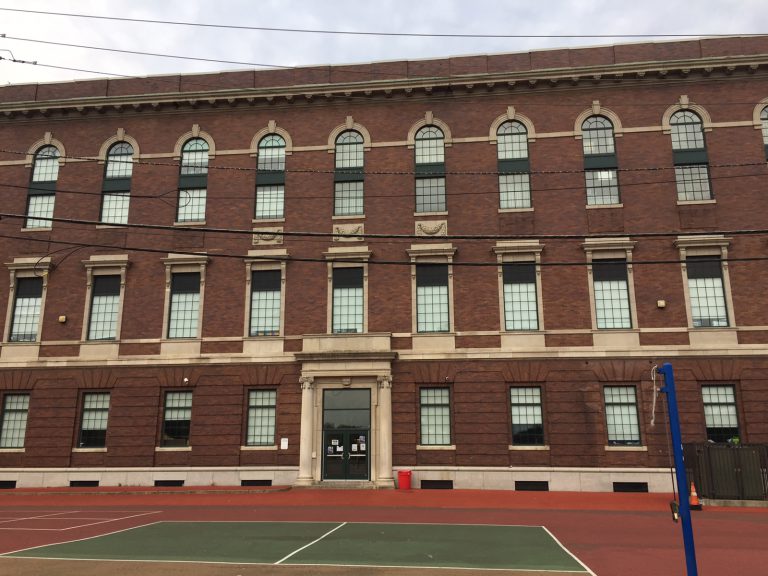 In 1993, the Rutgers University-Camden Community Leadership Center received a $1.5 million grant from the Delaware River Port Authority to begin the creation of a community school in Camden, New Jersey. The strategic planning was led by Dr. Gloria Bonilla-Santiago, founder of the LEAP Academy.

The LEAP Academy is a partner in services with the Rutgers-Camden Early Learning Research Academy, completed on the Rutgers-Camden campus in 2011. In 2017, another LEAP building at the corner of Cooper Street and Broadway was renovated to become space for various offices and services for students, parents, and educators. (Photograph by Jorge Perez) 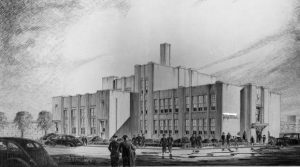 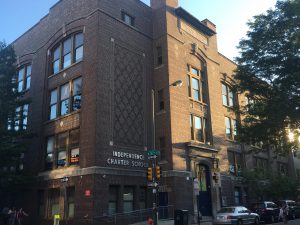 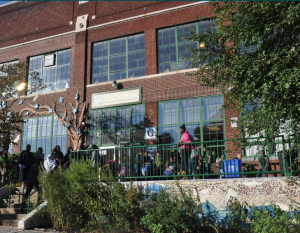 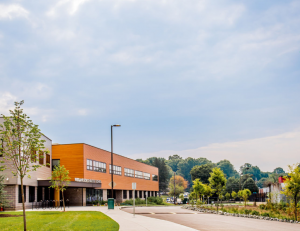 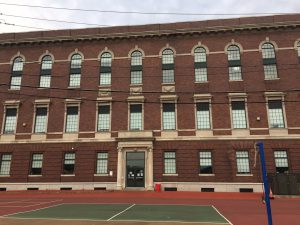