Doreen Skala holds a master’s degree in history from Rutgers University with a focus in colonial and transatlantic history. Her research has been published as a book chapter and as an article at a British historical society. (Author information current at time of publication.)

Fox hunting is the sport of mounted riders following a pack of hounds that are hunting a fox by scent. There can be no hunt without a pack. The fox hunt, unlike other types of hunting, is centered on the chase rather than the kill, as the fox is not edible or a threat to man. It is a formal, expensive, and time-consuming activity with a traditional etiquette, uniform, and terminology. In this 1845 advertisement for spring fashion in Philadelphia, riding clothes are modeled with hounds and horses.
The riders arrive for the meet in traditional attire—black cap, white shirt and tie, and a coat in the club’s muted color. The huntsman, also in full regalia, arrives and prepares the hounds. With his assistants, the whippers-in, he leaves the meet following the hounds, who have begun their search for a fox. The field falls into line behind the master of foxhounds, sometimes two or three abreast, following club protocol, such as old members before newer ones, and they follow, at a distance, behind the hounds and huntsman. As the hounds pick up speed, the riders move into a trot or gallop, attempting to keep up with the pack, listening all the while for the huntsman’s horn and voice. This procession continues over hill and dale as the hounds search for a fox. If the hounds are successful in unearthing a fox that provides chase, then it is a good day. If no fox is found, or if a fox goes to ground quickly, then the hounds and riders return to the meet disappointed, but full of hope for the next outing.

A good deal of the literature about fox hunting has been written by the hunters or by those against the hunt, and these writers cannot help but infuse their work with their own strong perspectives. Toward the end of the twentieth century, scholarship focused less on the history of fox hunting and more on the social role of foxhunting, on the specific clubs, and even on the plight of the fox. 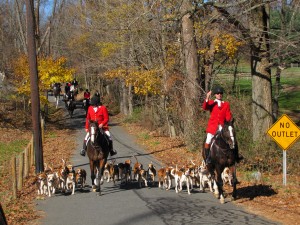