In the spring of 2002, the ash was shipped by rail to Hagerstown, Maryland, and then trucked to the Mountain View Reclamation landfill in south-central Pennsylvania. “There is no happy ending to the story,” said Lisa Finaldi, national coordinator the toxic campaign of the environmental group Greenpeace. “Hopefully there was a lesson learned from this and we can do better at managing household waste in this country.” Philadelphia taxpayers never had to pay the $630,000 to dispose of the ash because the contract required it to be disposed of legally.

Mark Jaffe covered the story of the Khian Sea while a reporter for the Philadelphia Inquirer. He also covered energy issues for the Denver Post. (Author information current at time of publication.) 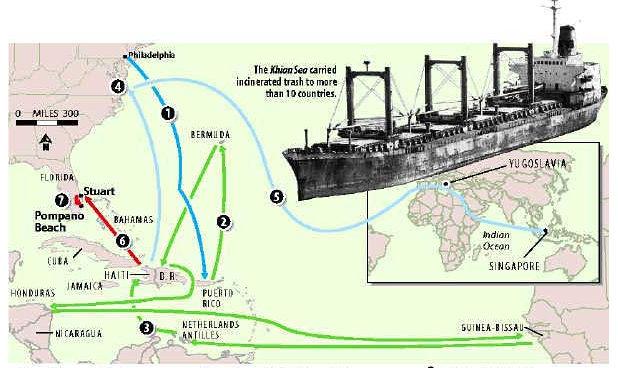 Tracking the Ash Aboard the Khian Sea

Used with permission of the Ft. Lauderdale Sun-Sentinel ©2016

Starting in late 1986, tracking the meanderings of the Philadelphia waste ash aboard the freighter Khian Sea became widespread in the U.S. media, and the attention grew as the voyage went on for years.

This mapping of the freighter's route in its effort to dispose of the 15,000 tons of ash appeared in the Ft. Lauderdale Sun-Sentinel in January 2001, fifteen years after the journey began. By this time, most of the ash had disappeared into the ocean on a leg between Yugoslavia and Singapore and the Khian Sea had been scrapped (in 1992).

Early in the ill-fated disposal cruise, a few thousand tons of the ash had been dumped in Haiti. Years later much of that ash was transported to Florida by another ship, which in 2000 offloaded it into a barge docked in the St. Lucie River at Stuart, Florida, and it seemed the ash would be buried at a landfill near Pompano Beach.

That was the plan at the time this graphic was published, but a public outcry scuttled that. In the spring of 2002, the ash was shipped by rail to Hagerstown, Maryland, and then trucked to the Mountain View Reclamation landfill in south-central Pennsylvania, its final resting place.

Here is the key to the routes marked on the map, which was published on January 26, 2001.

1. Sept. 5, 1986. The Khian Sea leaves Philadelphia for the Bahamas with 14,355 tons of incinerator ash. Officials in the Bahamas reject the shipment before it arrives, forcing the ship to change course.

2. Sept. 1986-Aug. 1987. The barge is turned away from Puerto Rico, Bermuda, the Dominican Republic, Honduras, Guinea-Bissau and the Netherlands Antilles.

3. Dec. 1987-Feb. 1988. The ship arrives near Gonaives, Haiti. The crew unloads about 4,000 tons of ash officially described as "soil fertilizer" before being stopped. The government orders them to reload and depart, but they leave the ash on the beach.

4. March 1, 1988. The Khian Sea arrives in Delaware Bay to return the remaining ash, but is rejected. The ship leaves for Africa.

5. Aug.-Nov. 1988. The ship, renamed Felicia, appears in Yugoslavia for repairs and is escorted away. It reappears near Singapore with a third name, Pelicano, but no ash. The captain testifies that it was dumped in the Atlantic and Indian oceans.

6. Spring 2000. The ash left in Haiti is picked up and brought to Stuart, Florida. It sits in the St. Lucie River until a home is found.

7. Thursday. The state agrees to bury the ash in the landfill near Pompano Beach. 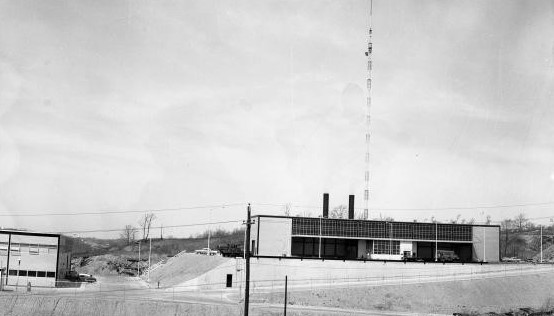 The 15,000 tons of ash that was loaded onto the Khian Sea in 1986 started its journey at this plant, known as the Northwest Incinerator, located in the Roxborough section. The Northwest Incinerator had been turning the city’s trash into ash since the 1960s. After the trash was turned to ash it was dumped on the land surrounding the incinerator until it could be trucked to a landfill. This worked until the Kinsley Landfill in Gloucester County, New Jersey, which accepted a large part of Philadelphia's ash, was closed to outside users. Then the city contracted with a private waste-removal company to ship the ash to the Bahamas. 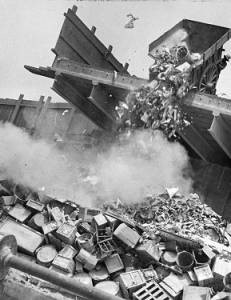 Garbage Being Loaded onto a Barge

Philadelphia had a long history of using ships to dispose of garbage, as in this 1937 photograph of trash being dumped into a riverfront garbage barge, which then carried its load away from the city and dumped it in the river.

Over time, the city began using landfills instead. In the early 1980s, the City of Philadelphia disposed of some of its trash at the Kinsley Landfill in Gloucester County, New Jersey. In 1984, however, Gloucester County blocked outside users from the landfill, leading the city to put 15,000 tons of incinerated trash onto an ocean-going ship called the Khian Sea. The ship was supposed to dump its cargo in the Bahamas during the late summer of 1986, but the Khian Sea and its cargo ran into many difficulties as port after port refused to accept the cargo. 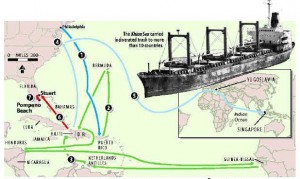 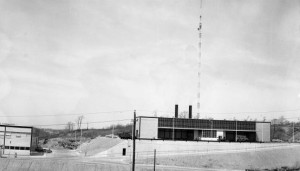 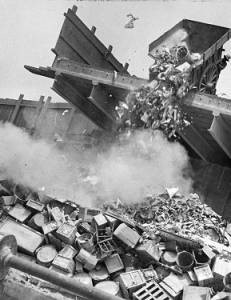