A hoagie is a sandwich made on a long Italian roll containing a variety of Italian meats and cheeses, lettuce, tomato, and onion, and dressed with olive oil, vinegar, and spices. Its exact origins are uncertain, but by the end of the twentieth century a mayoral proclamation declared the hoagie to be the “official sandwich” of Philadelphia.

Known outside of the Philadelphia region as a submarine sandwich, a grinder, or a hero, according to the Oxford English Dictionary the word hoagie did not come into common usage until 1967. However, within the region people were using the term as early as the 1930s, and it appeared in the Philadelphia City Directory for the first time in 1945. In 1950, a letter to the New York Times from a tourist to Philadelphia from Baltimore noted that the sandwich he recognized as a grinder was being referred to as a hoagie, hoggy, horgy, or hogy.

These alternative names give some clues to the hoagie’s still-mysterious origins. Some people have argued that the name derives from the Italian laborers who worked at southwest Philadelphia’s Hog Island during World War I and brought the sandwiches with them for lunch. The nickname for the laborers—hoggies—was applied to the sandwich as well. However, since the name does not appear in print until much later, this story seems unlikely. Another variation is that Italian street vendors, known as “hokey pokey” men, sold them, so that hoagie is actually a corrupted version of “hokey pokey.” The most widely accepted explanation, however, is that Al DePalma, a former musician, used the name at the sandwich shop he opened in 1936. Years before, he had seen a friend eating the large sandwich, and thought that he’d have to be a hog to finish it. DePalma called his sandwiches hoggies, but his customers pronounced them “hoagies.”

Whatever the source for the name, the sandwich is a connection to the region’s Italian immigrant heritage. When large numbers of Italians immigrated to the Northeast in the early twentieth century, many were motivated to do so by the hunger and poverty of their lives in Italy. In the United States, although they were still poor, they had access to better quality food and more meat than ever before. As one Italian immigrant wrote in a letter to his brother, still in Italy, in America “il pane e’molle, ma la vita e’dura” (“the bread is soft, but life is hard”). The hoagie’s excess, with its layers of meat and cheese and its sheer size, is a result of this newfound culinary abundance.

By the late twentieth and early twenty-first century, the hoagie had become representative of the Philadelphia region, eaten by all ethnicities and races. In 1992, Mayor Ed Rendell named the hoagie the Official Sandwich of Philadelphia. The convenience store chain Wawa has embraced the sandwich, and for years has sponsored a summer marketing campaign it calls hoagiefest. In 2014, the observance included an exhibit on the history of the hoagie at the National Constitution Center. Regional chain stores like Wawa and mom and pop delis and sandwich shops have helped ensure that the name remains dominant in the region.

Mary Rizzo is co-editor of The Public Historian and Public Historian in Residence at the Mid-Atlantic Regional Center for the Humanities at Rutgers University-Camden. (Author information current at time of publication.) 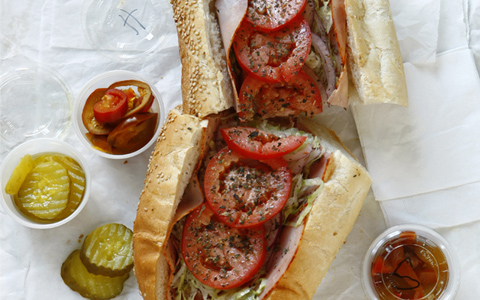 Philadelphians love their hoagies, and Visit Philadelphia, the tourist office that targets leisure travelers, devotes a prominent slice of its website to the sandwich at VisitPhilly.com. The site offers a directory to dozens of hoagie establishments in the city and beyond. A direct link to the Hoagie Finder is in the Links section below. 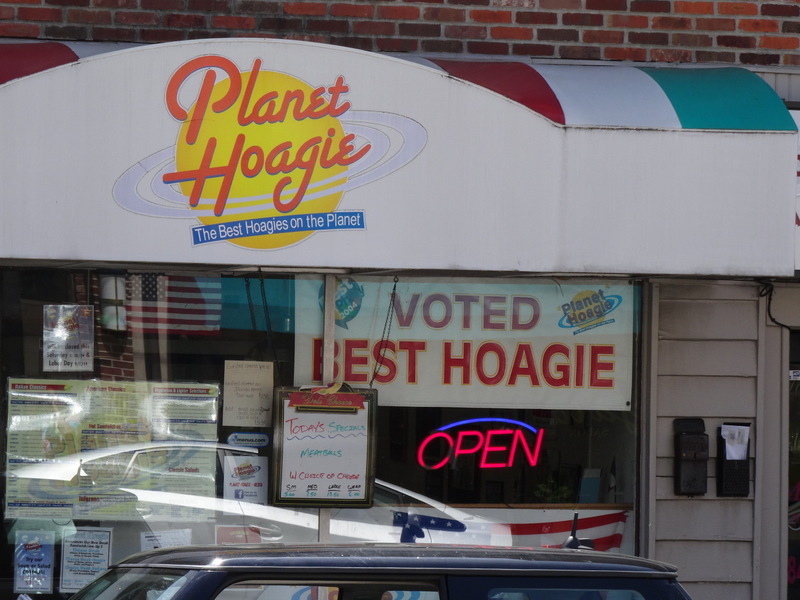 The region's relentless appetite for hoagies fuels commerce in the form of sandwich shops that specialize in the hoagie style. Local residents also seem to have an appetite for "best hoagie" stories produced by newspapers, magazines, and websites that publish perennial lists, resulting in dozens of shops that claim to have the best hoagies, based on one survey or another.

The high demand for hoagies makes for a competitive environment. As if having a good reputation locally isn't enough, Planet Hoagie has a slogan of "Best Hoagies on the Planet." At the time of this photo in 2014, Planet Hoagie had one store, in Media, Pennsylvania, and branches at the baseball and football stadiums.

(Photo by Donald D. Groff for the Encyclopedia of Greater Philadelphia) 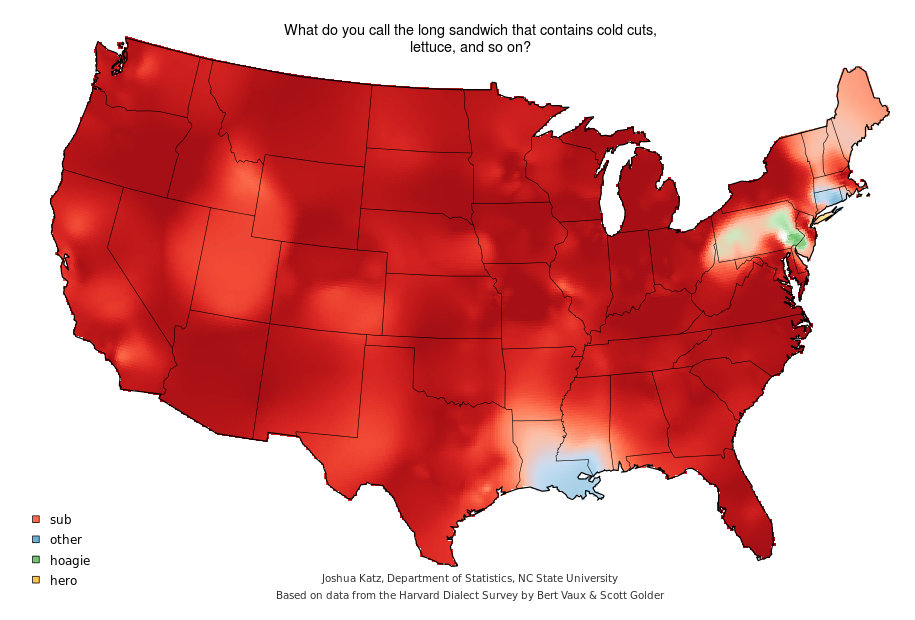 Residents of Greater Philadelphia don't need a survey to tell them a hoagie is a hoagie—not a submarine sandwich, or hero, or grinder. But any doubters can help themselves to a serving of the Harvard Dialect Survey, which offers solid evidence that around Philadelphia, "hoagie" is king.

The survey by Bert Vaux and Scott Golder, which concluded in 2003, posed 122 words, phrases, or usage choices to nearly 31,000 participants across all 50 states and the District of Columbia.

Question 64 on that survey was: What do you call the long sandwich that contains cold cuts, lettuce, and so on?

The results, reflected in this map, show the United States as a sea of submarine red, with only a swath of eastern Pennsylvania and southern New Jersey solidly in the hoagie league. 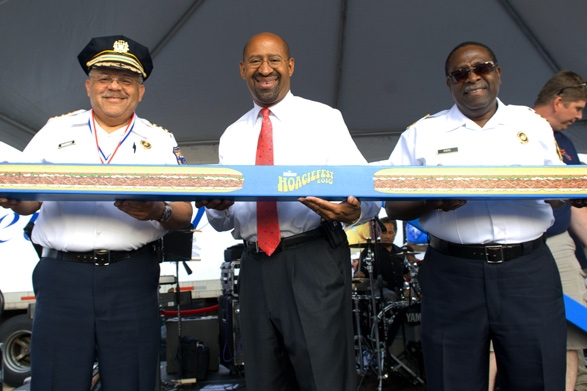 Hoagies are a staple at the Wawa chain of convenience stores, which opened its first store in 1964 in Folsom, Pennsylvania, southwest of Philadelphia. Originally a dairy, the company evolved into a convenience-store network as people started buying dairy products in the grocery store. With Philadelphia-area roots, the store offered a variety of hoagie selections that grew to be one of its best-known products. In this photo from 2014, Philadelphia Mayor Michael Nutter (center) joins Police Commissioner Charles Ramsey (left) and retiring Fire Commissioner Lloyd Ayers at an event promoting Wawa’s hoagies. As the chain’s network has expanded to include more than 600 stores in Pennsylvania, Delaware, New Jersey, Maryland, Virginia, and Florida, the country’s exposure to hoagies has grown as well. (Courtesy of Wawa Welcome America! Festival) 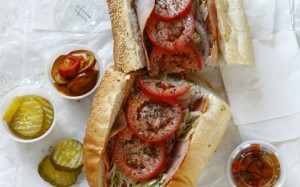 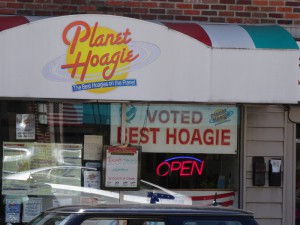 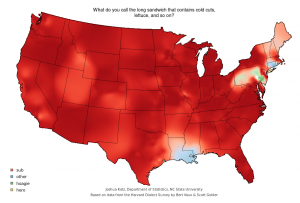 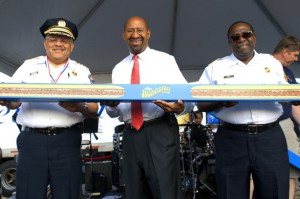