During the Cold War, conflict between the global superpowers of the United States and the Soviet Union took many forms, including sports. One such theater was Franklin Field on the campus of the University of Pennsylvania, which hosted an international track and field athletic competition known as the Liberty Bell Classic. Organized by the United States as part of its protest against the 1980 Summer Olympics held in Moscow, it responded to the Soviet Union’s invasion of Afghanistan earlier that year. In his January 23, 1980, State of the Union Address, President Jimmy Carter (b. 1924) called for a multinational boycott of the Moscow games in order to make the Soviet Union “pay a concrete price for aggression.”

In response to the president’s call for a boycott, sixty-four other nations joined the United States in refusing to participate in the Moscow-hosted Summer Olympic Games. To allow world class track and field athletes from nations involved in the protest to face off in an international competition, the United States organized alternative games in Philadelphia.

The selection of a site to host this event was complicated from the outset, as the United States scrambled to lobby foreign nations for support. In an effort to garner the support of African nations and in hopes of identifying a host for the alternate games, the Carter administration enlisted the help of world champion boxer Muhammad Ali (1942-2016). Ali, who was initially a vocal supporter of the U.S.-led boycott of the Summer Games, traveled to Africa where he was met with mixed reactions to the boycott by the leaders of several nations. Tanzania and Nigeria were critical of the boycott, while some nations, including Kenya, supported the United States.

Despite American hopes that Tanzania, Kenya, or the Ivory Coast would agree to host the alternate competition, negotiations ultimately fell through in large because of resistance to and criticism of the boycott from Tanzanian and Nigerian government officials. These officials believed that supporting the boycott was immoral and hypocritical on the grounds that the United States and its Western allies repeatedly refused to support African-led boycotts against the participation of athletes from racially segregated South Africa in international sporting events.

With the failure to identify a site in Africa, U.S. officials resorted to searching for an alternative at home. Finalists to host the competition included Berkeley, Stanford, and Philadelphia. When Berkeley town officials, fearing a failed event, dropped out of the competition, the University of Pennsylvania agreed to host the competition after being assured by the Athletics Congress, the national governing body for USA Track & Field, that the meet would draw the top athletes in the world who would not compete in Moscow.

Confined to July 16-17, the competition nonetheless drew hundreds of athletes from around the world to Franklin Field, the longtime home of the collegiate-level Penn Relays, to compete in thirty-three track and field events for men and women, ranging from the 100-meter dash to the decathlon. Joining the USA Track & Field team were notable athletes from nations including Canada, China, Egypt, Kenya, Sudan and West Germany. A number of American runners, including Mary Decker (b. 1958), Steve Scott (b. 1956) and Don Paige (b. 1956), a graduate of Villanova University, won gold medals in their respective races.

The 1980 Summer Olympics boycott had a major impact on local and international media outlets. For an international organization, such as NBC, the protest dealt a crushing blow to the midsummer network schedule, forcing high-profile sports reporters like Bryant Gumbel (b. 1948) to travel to Philadelphia instead of Moscow. Local news outlets, such as The Philadelphia Inquirer and the Daily News, seized the opportunity to provide in-depth coverage of event results and tie the competition into the larger conflict between the United States and the Soviet Union.

Soviet Union news agencies such as Tass criticized the American-led protest to the Moscow games, a movement they claimed was supported by a Western misinformation campaign against the Soviet Union. In an official statement regarding the Liberty Bell Classic, Tass said, “Irrespective of the results produced at the Philadelphia contests, they will in no way overshadow the international Olympic festival in the Soviet capital.”

A major theme that appeared in several articles on the competition, besides the hot and humid Philadelphia weather and thunderstorms, was the conflicting emotions of many athletes who participated instead of attending the Moscow games. Overall, the participants were disappointed to compete in Philadelphia instead of Moscow, where, had it not been for the United States-led protest, their training and skills could have been showcased against all of the world’s best athletes. Many athletes, despite understanding the reason behind the boycott, were outspoken in their frustration with the way the Carter administration ordered and carried out the boycott. Still, the alternative games found support from other athletes, including four-time Olympic champion in the discus throw Al Oerter (1936-2007) and Olympic medalist in the long jump Larry Myricks (b. 1956).

Despite not being the “Alternative Olympics” that President Carter and members of the U.S. State Department envisioned for the competition, the games drew crowds and ceremony, concluding with the presentation of gold-plated medals to each of the 650 members of the U.S. team. Over twenty-one thousand spectators packed into Franklin Field to watch the final day of the competition.

Although the 1980 Summer Olympic Games boycott was intended to pressure the Soviet Union to immediately withdraw its troops from Afghanistan, the Soviet-Afghan war wore on until 1989. Additionally, the Soviet Union and its allies later responded by boycotting the 1984 Olympics in Los Angeles.

Over time the Liberty Bell Classic became a footnote in the greater history of the Cold War and the Olympic Games. The accomplishments of the track and field athletes who participated in either the Liberty Bell Classic or 1980 Summer Olympics have at times been called into question as they did not compete collectively against world champion-caliber track and field athletes from around the world. This event, and the larger boycott, stands as an example of the ever-evolving forms of tension that arose between the United States and the Soviet Union during the Cold War. For the city of Philadelphia, the Liberty Bell Classic brought international attention and some of the world’s top athletes, helping solidify its standing as a world-class city.

Matthew H. Ward is a historian and journalist residing outside of Philadelphia with his wife and two daughters. He holds a B.A. in History and Culture from Arizona State University, an M.A. in History from Rutgers University-Camden, and an MPA from the University of Pennsylvania. Ward is the co-author of Boxing in Atlantic City with John DiSanto. (Author information current at time of publication.) 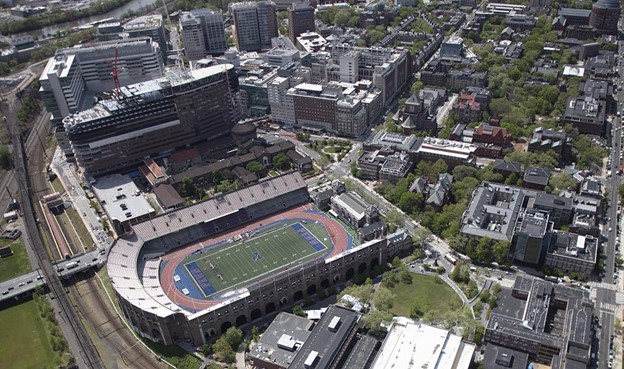 Although built in 1895 for University of Pennsylvania athletic events, Franklin Field has been the scene of many historic sporting events. Shown here in a 2019 aerial photograph, the field hosted eighteen Army-Navy football games between 1899 and 1935, and it served as one of the former homes to the Philadelphia Eagles from 1958 to 1970. In 1960, the stadium hosted the NFL Championship Game, an Eagles victory over the Green Bay Packers.

The Liberty Bell Classic Games came to Franklin Field in 1980, after sixty-five nations retaliated against the Soviet Union for its invasion of Afghanistan by boycotting the Moscow Summer Olympics. Hundreds of competitors competed in thirty-three track and field events. The event attracted over 21,000 fans and was broadcast nationally and internationally on July 16 and 17, 1980.

By 2021, Franklin Field held the distinction of oldest college stadium in the United States. The field hosts the annual Penn Relays – an international competition – in addition to the university’s athletic events and has a total capacity of 78,205. 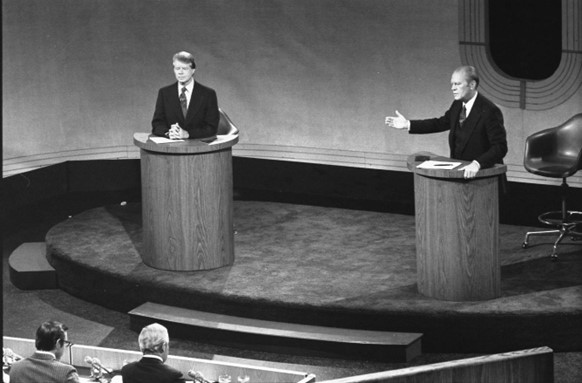 The president behind the 1980 Olympic boycott, Jimmy Carter, rose to the nation’s highest office from modest origins. Born October 1, 1924, in Plains, Georgia, Carter graduated from the Naval Academy in Annapolis, Maryland, and remained a naval officer until 1953 when he returned to his hometown. Increasingly inspired to act against racial tensions he witnessed, in 1962 Carter decided to enter state politics. He quickly garnished attention not only for pushing to eliminate racial segregation but also by promoting ecology and more efficient government. By 1970 this attention led to his election as Governor of Georgia, a momentum he rode to the presidency only six years later. He is depicted in this photograph on September 23, 1976, at the first presidential debate that year against the incumbent Gerald Ford (at right in the photo) at the Walnut Street Theater in Philadelphia.

During his presidency, Carter’s domestic achievements included expanding the national parks system to improve the environment, establishing a national energy policy, and creating the Department of Education. He attempted to address the economy and unemployment, succeeding in creating nearly eight million jobs, but ultimately failed to fully address nearly record inflation, resulting in a recession. Internationally Carter fought for human rights, brokering a peace agreement between Egypt and Israel in 1978 and opening full diplomatic relations with the People’s Republic of China.

In 1979 the Soviet Union’s invasion of Afghanistan halted Carter’s attempt to negotiate a nuclear limitation treaty. In response to this invasion, he called for an international boycott of the Moscow 1980 Olympics. For the athletes of the sixty-five nations that joined the boycott, Carter’s administration helped to organize an alternative event, the Liberty Bell Classic, at Franklin Field in Philadelphia. Soon thereafter, Carter lost the 1980 election to Ronald Reagan, but he was awarded the Nobel Peace Prize in 2002 for his lifelong efforts to bring equal rights, democracy, and peace throughout the world. 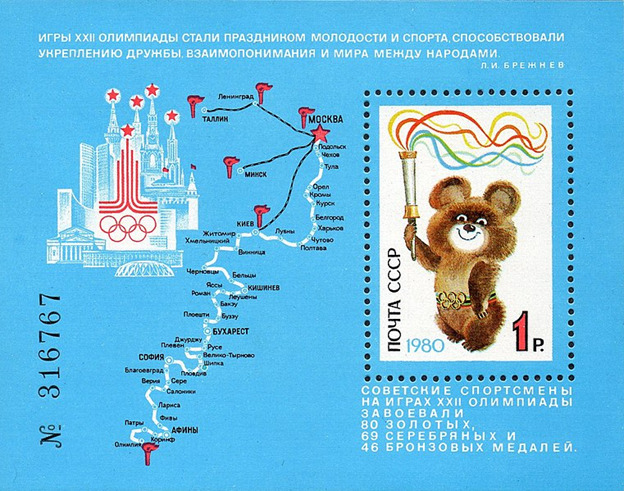 The 1980 Summer Olympic Games in Moscow, the subject of this stamp sheet, proceeded with only eighty countries as sixty-four other nations joined the United States in a boycott of the event. Following the Soviet Union’s invasion of Afghanistan in December of 1979, the United States under President Jimmy Carter sought to pressure the Soviets into withdrawing. On January 14, 1980, Carter announced a one-month deadline for the Soviet Union to cease the invasion to avoid numerous consequences, including an Olympic boycott. When this date came and went without a change, the Carter administration called for an international boycott of the games.

Although the United States was initially joined by most of its allies and the majority of the Middle East, international support of the boycott was moderate at best. To attract more support, the Carter administration enlisted renowned boxer Muhammad Ali to travel to Africa to convince its nations to join in protest. There too, response was mixed. Some countries were talked into joining, but others disapproved of the boycott. Many of these nations previously had boycotted international sporting events due to the participation of racially segregated South Africa, but the United States had not joined them. They found the U.S. stance in 1980 hypocritical and refused.

Ultimately sixty-five nations joined in the United States’ boycott. To allow athletes to still compete, the Carter administration decided to host an alternative event—the Liberty Bell Classic—at Franklin Field in Philadelphia. Despite many countries backing out of the games, however, the 1980 Olympics proceeded in Moscow. In the 1980 stamp sheet shown, the game’s mascot Misha the Bear can be seen holding an Olympic torch with the torch route from Olympia to Moscow displayed beside him. Listed underneath is the number of medals the Soviet Union won during the event - eighty gold, sixty-nine silver, and forty-six bronze. (Stamp Sheet by Yuri Levinovsky) 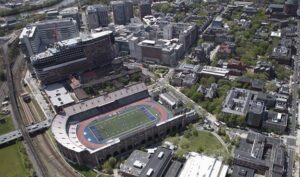 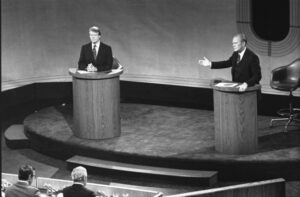 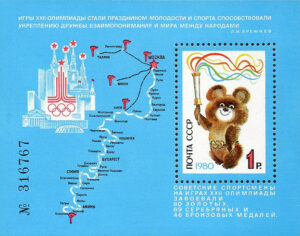