As the dominant response to the housing needs of low-income residents since the 1930s, public housing in the Philadelphia region provided shelter for thousands. Over the years, however, as needs as well as programs changed, the city and the region struggled to provide safe, decent, and sanitary living quarters when the private market failed to produce suitable alternatives.

Greater Philadelphia, like urban-industrial regions nationwide, faced a serious problem housing lower-income workers in the late nineteenth and early twentieth centuries. Because government treated housing as a private commodity, it was up to voluntary organizations such as the Philadelphia Housing  Association, formed in  1911,  to identify the evils of fetid alleys and decrepit  tenements and press city officials to pass and enforce stricter housing ordinances. However, by the 1930s housing codes, zoning, and home-ownership campaigns failed to appreciably better squalid housing conditions, and with the Great Depression jobless families faced evictions and foreclosures.

The federal government became involved with Philadelphia-area housing during World War I, when the United States Housing Commission and the Emergency Fleet Corporation constructed well-designed communities for shipyard workers at Camden’s Yorkship Village and along Oregon and Elmwood avenues in South Philadelphia. Washington disposed of these projects after the war and reverted to its tradition of staying out of the housing market until the crisis of the Greater Depression.

Among the leading voices demanding federal action was Catherine Bauer, whose writing on publicly funded modern housing complexes in Europe proved influential on the new Housing Division  of the New Deal’s Public Works Administration. As director of the Labor Housing Conference in the early 1930s, Bauer joined with David Edelman of the American Federation of Full-Fashioned Hosiery Workers to secure funds from the Housing Division for  “modern,” limited-dividend  housing for Philadelphia’s ill-housed working class. Their efforts led to construction of the city’s first public housing units in North Philadelphia’s Juniata Park neighborhood. Designed by Russian-born, Philadelphia architect Oscar Stonorov, the 184-unit Carl Mackley Houses opened in 1935. The  short-lived Housing Division built only one other project in Philadelphia, the modern, 258-unit Hill Creek Homes, located overlooking Tacony Creek Park in the Northeast.

Matters of Class and Race

This promising approach to providing well-designed, European-style, modern housing developments ended when congressional critics, citing costs, rejected Bauer’s “communitarian” approach to low-income housing.  The Wagner-Steagall legislation of 1937 opted instead for a  two-tiered policy of providing mortgage insurance to promote home ownership for the “striving” middle class while relegating public housing  to way stations for the poor. Such housing became not only class-designated, but race-segregated as the federal government applied its “prevailing neighborhood composition” rule.  Although housing needs were great among African Americans, who were excluded from suburbia by the Federal Housing Administration’s “redlining” policies, public housing such as the Carl Mackley and the Hill Creek Homes were in predominantly white neighborhoods and therefore reserved for white families.

Under federal prompting, Philadelphia created a Housing Authority in 1937, a Planning Commission in 1942, and a Redevelopment Authority in 1946. The 1949 Wagner-Ellender-Taft Housing Act, which called for 810,000 units of public housing nationally, revived public housing in Philadelphia. The city’s “Old Guard” Republicans never embraced public housing, but with election in the 1950s of the Democratic reform administrations of Joseph Clark and Richardson Dilworth, the city embraced the 1954 Housing Act to transform public housing into the handmaiden of an exuberant city rebuilding program. Because the 1954 law required communities to build replacement units  for every family uprooted by public action, Philadelphia built 5,970 new public housing units between 1953 and 1961. Despite Bauer’s condemnation of those “God-damned skyscrapers,” 77 percent of those units were in high rise projects, such as Wilson Park, Raymond Rosen, Norris, Schuylkill Falls, Mill Creek, Harrison Village, Mantua Hall, and Hawthorne Square.  African Americans occupied two-thirds of all these units.

In Camden, Echoes of Philadelphia

Regionally, Camden, N.J., experienced similar problems as growth in the Black population put increasing pressure on public facilities, many of which had been built to meet the war emergency on a segregated basis. When in 1954 Camden’s housing chief, Joseph McComb, refused to integrate the city’s all-Black projects, the NAACP sued, but to no avail.  By 1966 Camden’s Roosevelt Manor, Chelton Terrace, and Branch Village remained segregated, and in the face of a number of demolition projects without replacement housing African Americans took protest to the streets.

More often, developers  negotiated with the Housing Authority to purchase anywhere from 50 to 100 units of “used housing,” rehabilitate them, and for an agreed upon price “turn the key over” to the authority.  Viewed as easier than conventional public housing to own and manage, by the 1990s maintenance costs for this type of housing skyrocketed.  By 2009 the Philadelphia Housing Authority owned and managed more than 4,400 occupied “scattered” single-family units, and 1,500 additional units sat empty and moldering. That year, HUD authorized the PHA to sell 1,800  “used housing” units.

The scattered-site approach received further support under the Housing and Community Development Act of 1974, which introduced  Section 8 vouchers as a means of subsidizing low-income renters in the private market. Philadelphia used the program to acquire a massive stock of “substantially rehabilitated” row houses. By the turn of the twenty-first century, many of these also became a burden on the city, which sought permission to reduce its inventory

Still, publicly-owned housing did not disappear.  In the 1990s the aging, often glowering edifices built in the 1940s, 1950s, and 1960s continued to shelter city families. Unlike in New York City, where city and state government aid kept public housing well-managed, maintained, and policed, in Philadelphia, as in many other cities, public housing deteriorated.  The problem stemmed from the 1937 federal housing law. Through the Annual Contribution Contract and annual payments, Washington underwrote the entire capital cost of public housing projects. In return, Philadelphia exempted projects from taxes, leaving only management and maintenance costs to be covered by rents. Managers deposited rent money in reserve funds to cover anticipated maintenance costs.  This was sufficient as long as projects functioned as way stations for the upwardly mobile working class, which they did between 1941 and 1950. By 1960, however, the situation changed.

As early as 1947, Washington compelled the Philadelphia Housing Authority to purge from its rolls stable “families with income over the maximum for continued occupancy.”  Between 1949 and 1960, priority for public housing went by law to the thousands of poor, largely African American families uprooted by urban renewal. By 1960 more than 40 percent of family heads living in the city’s Richard Allen Homes were jobless; more than 23 percent were out of the labor force.  The problem only worsened after 1969 when the an amendment  offered by Senator Edward Brooke limited public housing rents to not more than 25 percent of family income (it was changed to 30 percent in 1982).  At the same time both project maintenance and management costs rose, draining reserve funds and shattering the operating formula.  In 1967 HUD launched a public housing modernization program, providing grants to local housing agencies  to upgrade  increasingly vandalized, crime-ridden complexes such as the Norris Homes, Cambridge Plaza, and Raymond Rosen homes, but continued deterioration marked much of Philadelphia’s public housing stock as “troubled.”

Hearings on “troubled” housing authorities, including Philadelphia, in 1998 disclosed mismanagement, dire budgetary problems, and outright corruption in the Philadelphia Housing Authority. The Philadelphia press lambasted the PHA as a “cesspool of patronage and inefficiency.” In response, Pennsylvania Governor Edward Rendell brought Carl Green to Philadelphia from the Detroit Housing Authority.  A reformer, Green proved dynamic and aggressive in turning the PHA around.  He used HUD’s new HOPE VI program, which funded replacement of distressed, often high-rise, public housing with low-density, mixed income communities, to demolish one aging complex after another. In 2005  HUD recognized him for his innovation and rewarded  Philadelphia by selecting it for HUD’s flagship Moving to Work program, giving the authority maximum flexibility in how it operated city public housing.

Between 1998 and 2011 Green compiled a distinguished record of accomplishment. Much of the city’s notoriously grim public housing stock disappeared. Philadelphia toppled eight of its large residential communities, including Paschall Homes, Liddonfield,  the Martin Luther King Plaza, the giant Raymond Rosen Homes, the Norris Homes, and Mill Creek. Using HOPE VI, Philadelphia replaced not only towers like  Cambridge Plaza and Mantua Hall but also low-rise complexes such as Tasker and Richard Allen with sprightly, well-landscaped, town house villages in the style of the “New Urbanism.”  Mantua Hall became Mantua Square, Tasker, the “Greater Gray’s Ferry Estates.  Despite these accomplishments, Green was forced to leave the PHA in 2011 following revelations of financial and personal improprieties.

Funding from the 2009 American Recovery and Reinvestment (Stimulus) Act helped advance the transformation of Philadelphia’s low-income housing stock.  Increasingly, after 2008 programs such as HOPE VI and Moving to Work enabled the authority to deconcentrate low-income families and to create mixed rather than monolithically poor communities and to expand local management responsibilities. Such reforms responded effectively to earlier critics, including Catherine Bauer, but they had the disadvantage of reducing the stock of affordable units.  There is little evidence that the regional housing market has compensated for the loss, and thus the challenge to meet the needs of the region’s lower-income residents continues.

John F. Bauman is Visiting Research Professor at the Muskie School of Public Service at the University of Southern Maine and the author of books and journal articles on a broad range of modern urban policy issues. (Author information current at time of publication.) 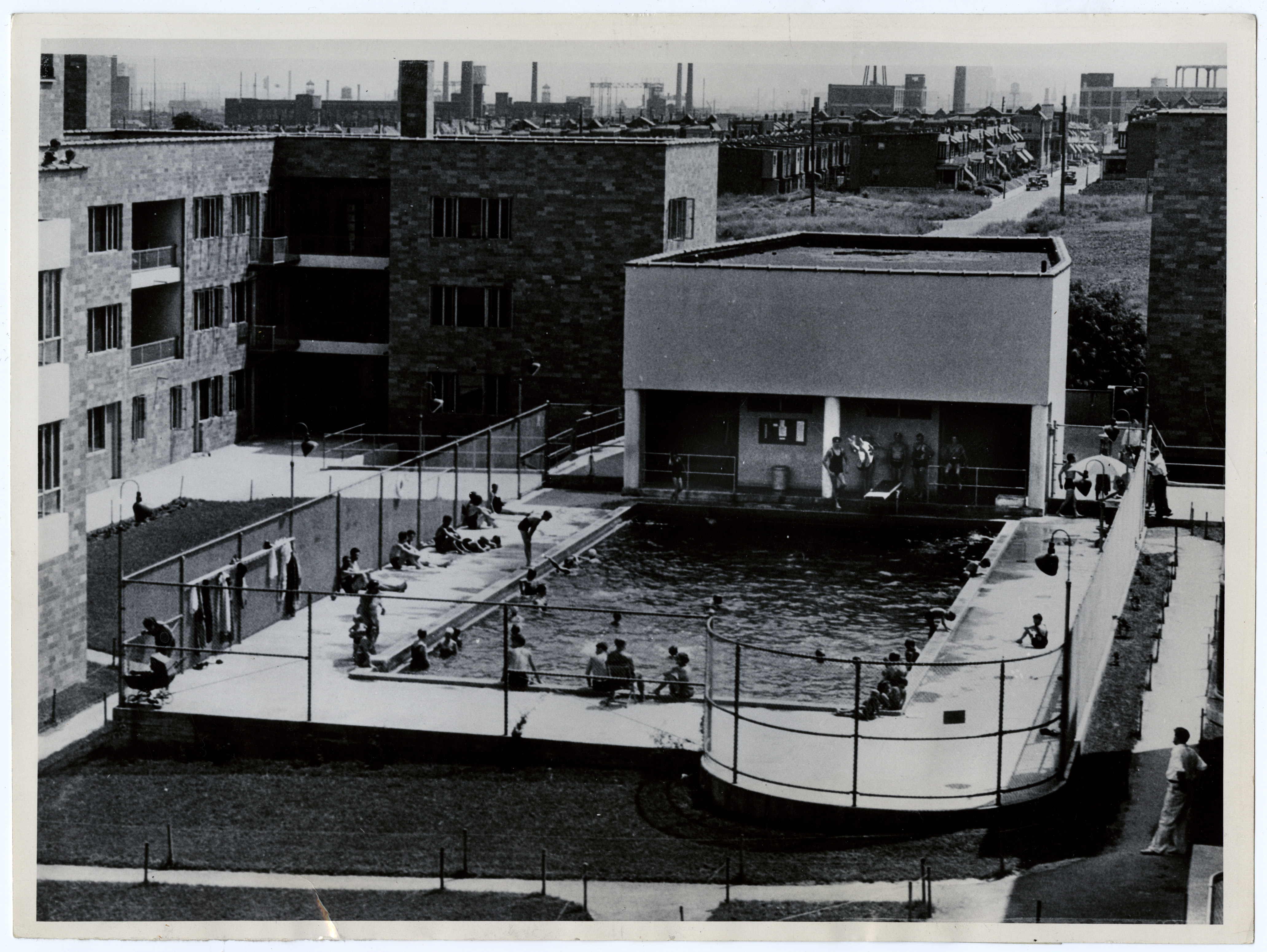 The Carl Mackley Houses, named for a worker killed during a 1930 strike, were commissioned by the American Federation of Full-Fashioned Hosiery Workers and financed by a loan from the Public Works Administration. 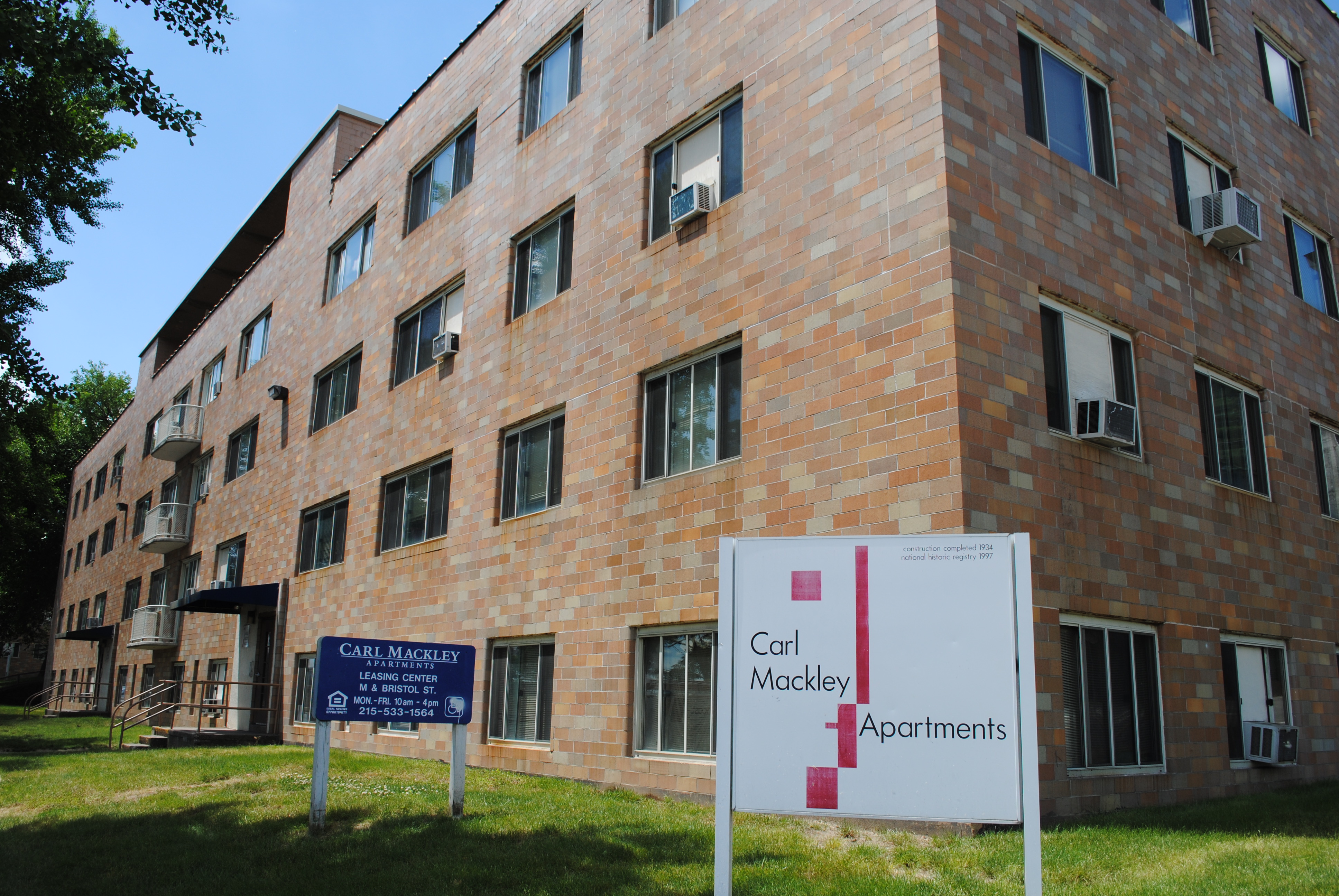 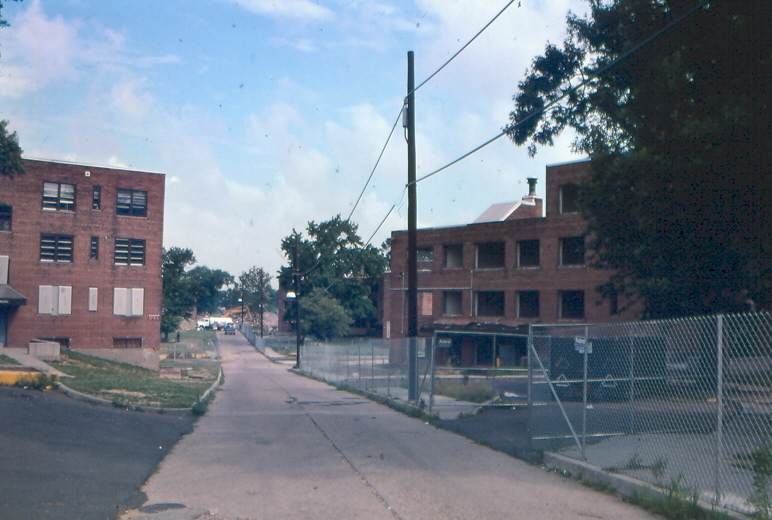 Completed in 1938 and designed by the same architect responsible for the Mackley Homes in Philadelphia, Oscar Stonorov, Westfield Acres in Camden served low-income residents well until it was undercut by rising levels of poverty, and in the 1980s, a scourge of drugs. Torn down with funds from HUD’s Hope VI program to create a more residential look and feel to the community, the new Westfield Acres extended outward with the guidance of the community development organization. 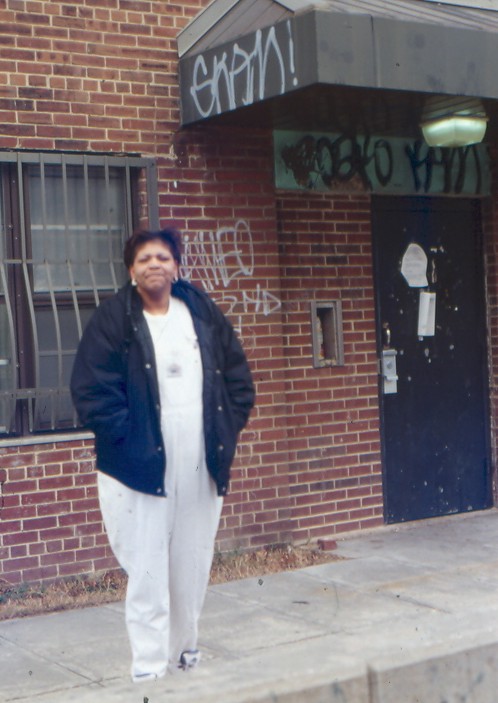 A leader in the old Westfield complex, Donza Harmon, never got the chance to return to the newly constructed community. After utilizing a Section 8 voucher to live in the community of Pine Hill 20 miles away during construction, Harmon died at 46 in 2003, before she could return to the community she help combat crime and disinvestment. 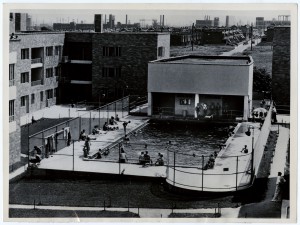 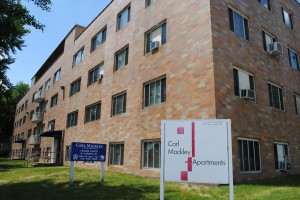 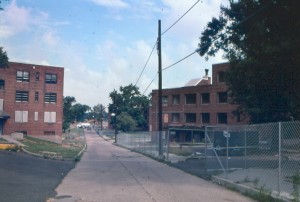 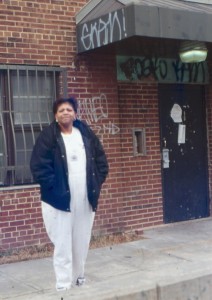