Bryan J. Dickerson is a military historian from Gloucester County, New Jersey. He holds a B.A. in History from Rowan University and an M.A. in American History from Monmouth University. He is a Navy veteran of Operation Iraqi Freedom who deployed twice as a member of the 2nd Marine Aircraft Wing. (Author information current at time of publication.) 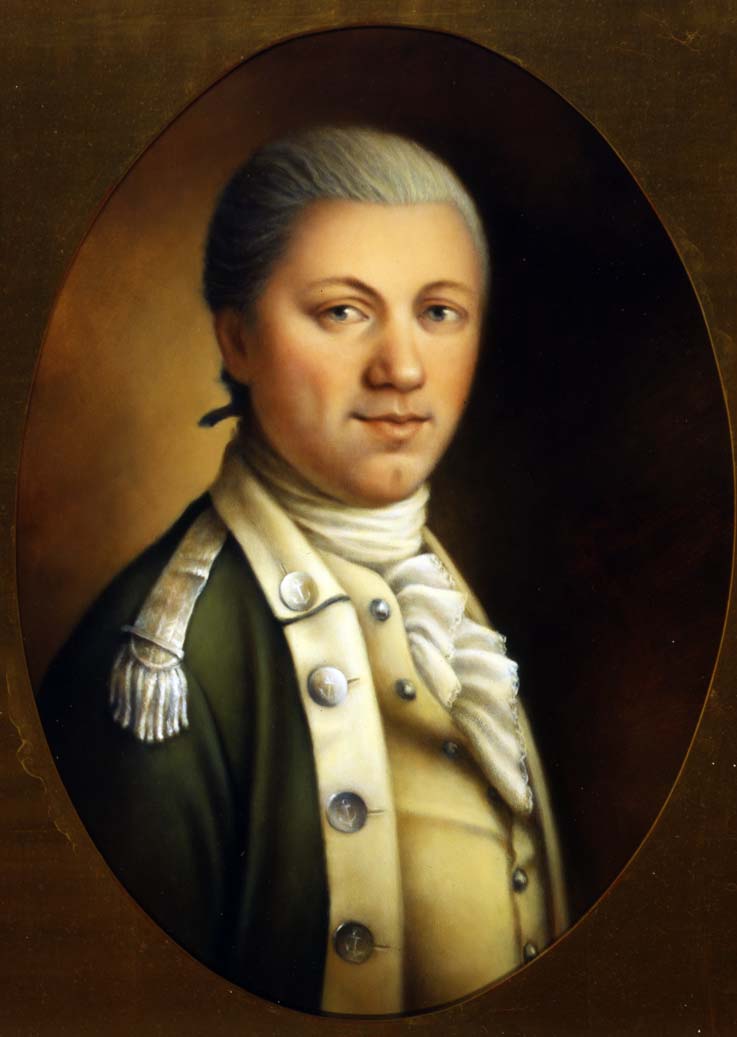 Samuel Nicholas was appointed by Congress as a captain for the new Marines on November, 28, 1775. His commission was signed by John Hancock, president of the Continental Congress. Born in Philadelphia around 1744, Nicholas was educated at the Academy of Philadelphia (forerunner of the University of Pennsylvania). At the time of his commissioning, Nicholas was proprietor of the Conestoga Wagon Inn.

In late 1776, Samuel Nicholas was promoted to major. He led a battalion of Marines as part of General George Washington’s Continental Army. He and his Marines participated in the Second Battle of Trenton and the Battle of Princeton and encamped with the army at Morristown for the remainder of the winter. For the rest of the war, Nicholas performed administrative functions for the Continental Marines. For that reason and by virtue of holding the highest rank in the Continental Marines, he is considered to be the first commandant of the Marine Corps. 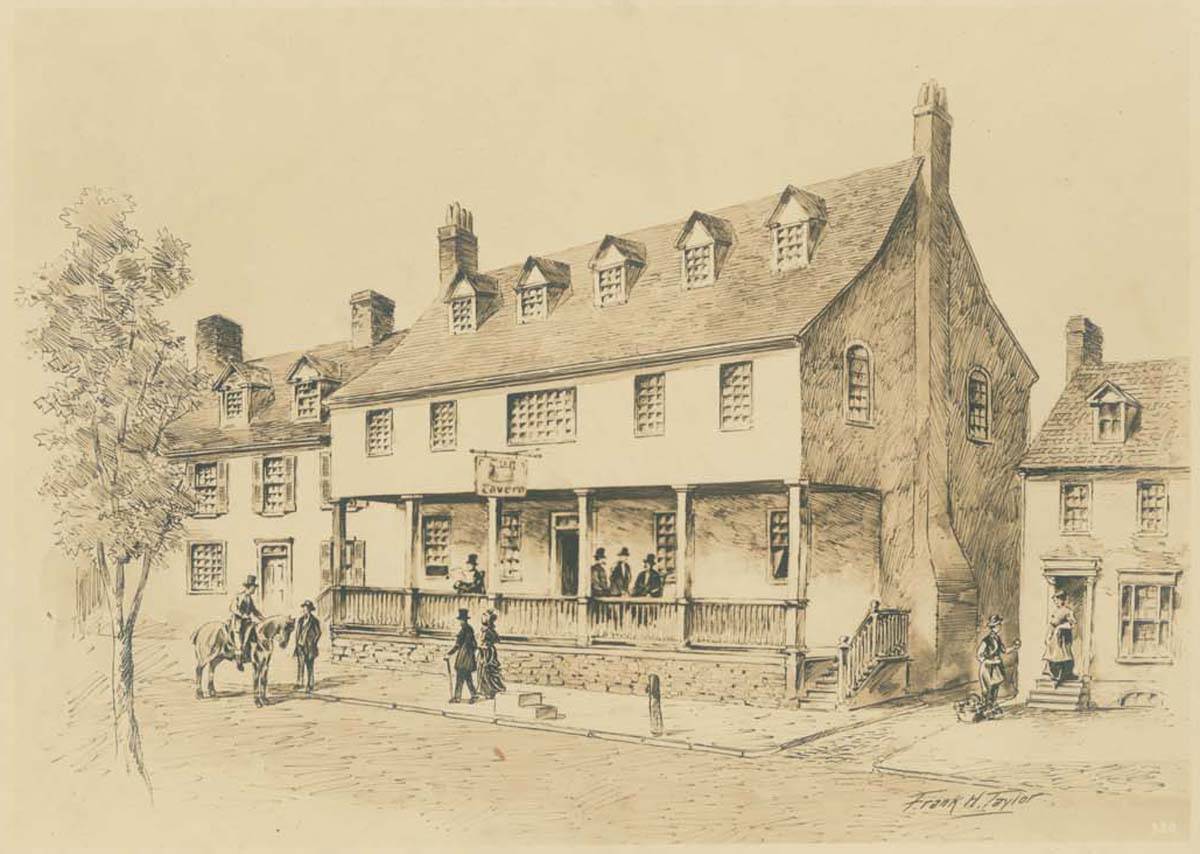 The Tun Tavern, by Frank Taylor

This drawing by Frank Taylor (1846-1947) depicts the Tun Tavern as it stood in the late eighteenth century. Taylor’s drawing was completed in 1922, over a century after a fire destroyed the tavern. However, the building was again on the public’s mind as a historical marker was placed on the site in the 1920s. The plaque commemorated the tavern as the birthplace of the United States Marine Corps and read:

THIS TABLET MARKS
THE SITE OF TUN TAVERN
THE BIRTHPLACE OF THE
UNITED STATES MARINE CORPS.
HERE IN 1775 CAPTAIN SAMUEL
NICHOLAS, THE FIRST MARINE
OFFICER, OPENED A RECRUITING
RENDEZVOUS FOR THE MARINE
BATTALIONS AUTHORIZED BY
RESOLUTION OF THE
CONTINENTAL CONGRESS
NOVEMBER 10, 1775 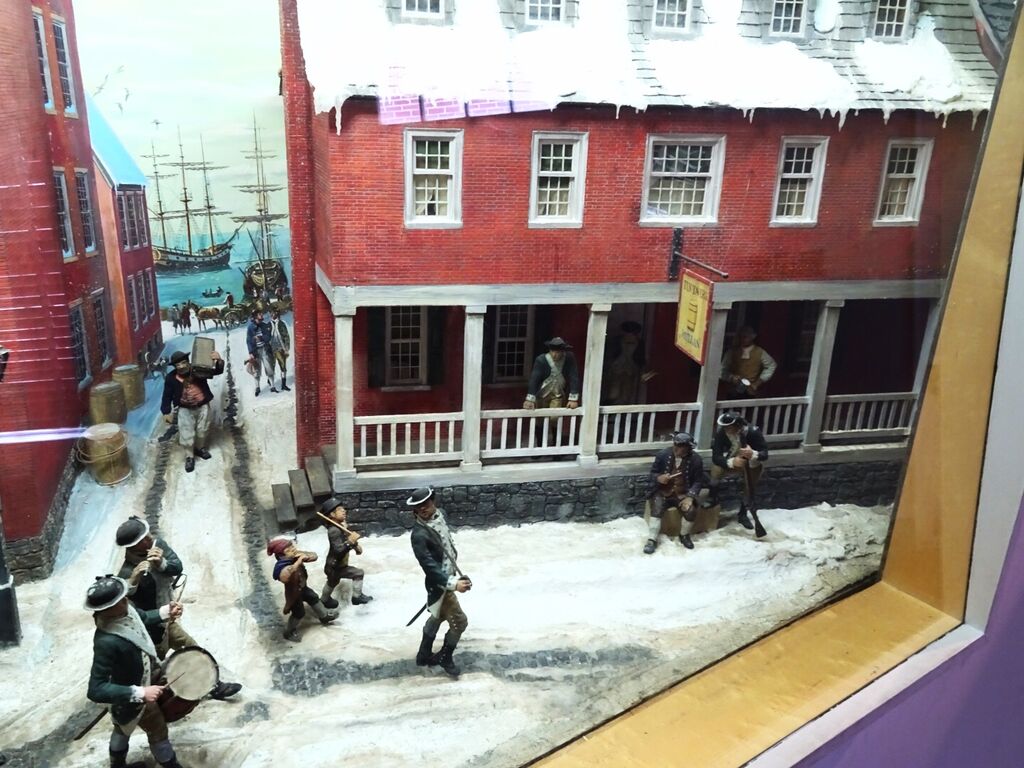 The Tun Tavern is depicted at right in this segment of a diorama at the New Hall Military Museum in Independence National Historical Park. The small museum is located on Chestnut Street between Second and Third Streets, near Carpenters' Hall. The body of water in the background of the diorama is the Delaware River. (Photograph by Donald D. Groff for the Encyclopedia of Greater Philadelphia) 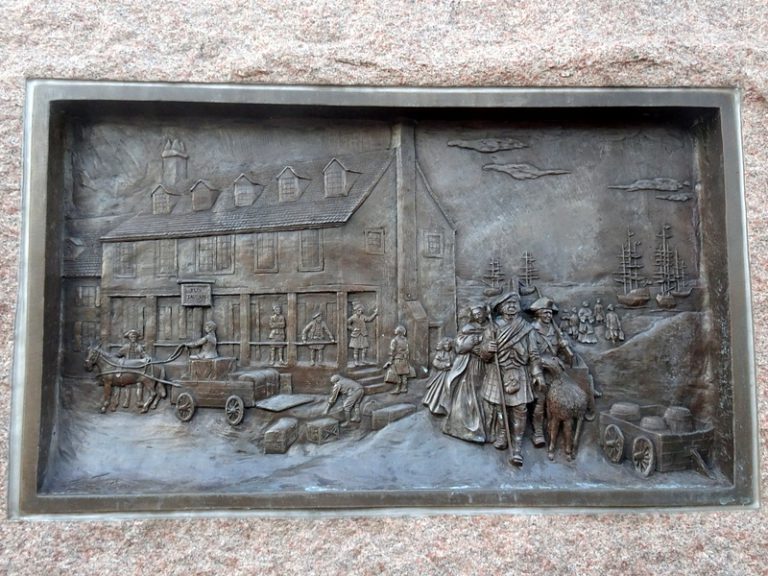 The Tavern on Scots Memorial

Tun Tavern is depicted on a memorial marking the arrival of Scots immigrants near the original site of the tavern. The memorial was placed by the St. Andrews Society of Philadelphia, which was founded in 1747 at Tun Tavern.

The scene shows a family of Scots immigrants, newly arrived in Philadelphia, walking up from the Delaware riverfront past the tavern. (Photograph by Donald D. Groff for The Encyclopedia of Greater Philadelphia) 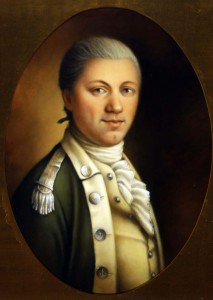 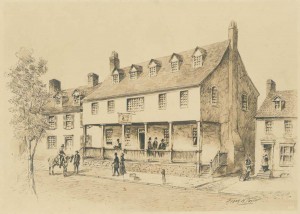 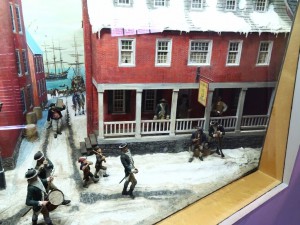 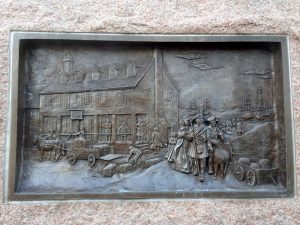 McGrath, Tim. Give Me a Fast Ship: The Continental Navy and America’s Revolution at Sea. New York:  Penguin, 2014.