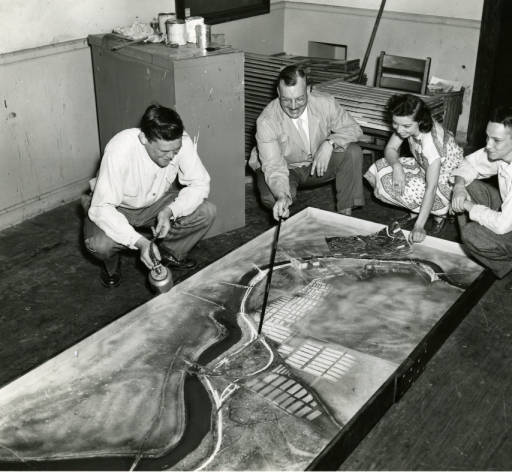 How will they know? How will future generations of Philadelphians have any inkling that their city once thrived as a premier manufacturing center, the fine products issuing from its shops, mills, and plants prized by customers around the nation and the world?

There are few traces left of this history—abandoned factory buildings here and there—and the acres and acres of empty lots that form the landscape of decaying neighborhoods that once brimmed with industrial sites and jobs give no clues. The curious onlooker might ask: What was here? What happened?  Delving into the past is to find that the decline of Philadelphia manufacture is directly related to its rise, flip sides in effect of the same coin: of the strengths and weaknesses of a particular kind of industrial system that graced the city, one that rested by and large on the production of quality goods.

A rich agricultural hinterland, an enterprising merchant community, and ready markets for the products processed and crafted in the city transformed Philadelphia into a major commercial entrepôt within a half century of its founding by William Penn in 1681. By the time that delegates convened in Philadelphia in 1776 to write the Declaration of Independence, the city had become second only to London in both the volume and value of the goods that entered and left its port.  Philadelphia’s commercial fortunes plummeted, however, in the early nineteenth century as the city lost trade to its chief rival, New York. Rather than enter a long-term period of economic stagnation, Philadelphia fortunately embarked on a new direction that would mark its history for the next 150 years: prospering as a major manufacturing center.

Chronicling Philadelphia’s rise to industrial supremacy is difficult since no single invention, businessperson, event, or circumstance can be designated as a prime mover.  Thousands of initiatives occurred as a steady mushrooming of varied enterprise.  The individual efforts do add up to a whole, and at least four features characterized Philadelphia’s industrial structure in its heyday.

Second is diversity of work settings. Goods were made in homes, craft shops, sweat shops, small manufactories with hand and foot-driven machinery, water and steamed-powered mills, and multidimensional plants.  In their manufacture, some products even passed through several of these settings from initial processing of raw materials to final finishing.

Third is specialization in processes and products. Philadelphia manufacturers did not prosper by competing with mass producers of goods in other parts of the country, but rather by operating in niche markets fashioning high-quality wares or by concentrating in single aspects of production (in textiles, for example, separate establishments emerged respectively to spin special fibers, weave fine clothe and dye elaborate fabrics). Even in the case of Philadelphia’s famous (but relatively few) large firms, such as Baldwin Locomotive, Stetson Hat, and Midvale Steel, specialty production remained the hallmark.  Baldwin rarely made two engines alike, meeting particular orders of rail carriers for locomotives with highly specific dimensions and powers; Stetson produced the finest of felt and straw hats and sold them in beautifully-made boxes with silk insides and adorned with the renowned Stetson logo; and Midvale produced a specialty grey steel and took orders for specialty castings and forgings (unlike its other Pennsylvania rivals, U.S. Steel and Bethlehem Steel).

Fourth is the prevalence of small-to-medium-sized, family-owned-and-managed manufacturing concerns that were reliant on highly skilled workforces.  Large, corporate enterprises with armies of mass assembly workers did not form a part of Philadelphia’s economic skyline.

A number of factors contributed to Philadelphia’s particular industrial history.  An abundance of skilled labor allowed for specialty production. The absence of a powerful river-way with waterfalls initially limited the building of large-scale, fully mechanized factories.  Philadelphia custom producers further chose not to compete with manufacturers of cheap, standardized products in other cities; their small size afforded a flexibility that allowed them to shift into new product lines and profit in niche markets. Finally, Philadelphia’s elite tended to invest in banks, canal and railroad construction, and mining rather than in local industry; this created a capital scarcity for manufacture in the city, another limit on large-scale ventures, and a vacuum that enterprising native-born and immigrant skilled men could fill in establishing their relatively small custom manufactories.

Although the first use of the label “Workshop of the World” cannot be precisely determined, by the first decade of the twentieth century, the phrase was regularly attached to Philadelphia in journals and books and in the pronouncements of business and civic leaders.  However, the success and prosperity that marked Philadelphia industry crested in the 1920s when declines occurred in textile and garment manufacture and in shipbuilding—although new production of radios and electrical appliances sustained employment.  The Great Depression saw retrenchments everywhere as unemployment at its peak reached more than 40 percent of the city’s work force. Military orders during World War II then boosted production, but a massive enduring decline in industrial jobs occurred thereafter. At a postwar height in 1953, 359,000 Philadelphians were employed in manufacture, 45 percent of the city’s entire labor force; in our own times, the number of industrial jobs has dramatically fallen to below 30,000, 5 percent of the total. These figures reflect the greater deindustrialization of the United States, though the downward spiral for Philadelphia far exceeded the nation as a whole; since the early 1950s, overall manufacturing jobs have declined from a high of 19.4 million to 14 million, from 32 percent of all employment to 10 percent.

As Philadelphia’s industrial ascent had a particular cast, so did the descent.  Philadelphia did not lose manufacturing jobs because national corporations purchased and liquidated the facilities of local firms to undo competition; nor because financiers breezily bought, broke up and sold firms to make paper profits; nor because of foreign competition and the flight of businesses to low-wage areas in the U.S. and abroad—as happened in other American cities and regions over the course of the twentieth century.  Rather, Philadelphia’s manufactories closed their doors because of changes in consumerism. Synthetic fibers, for example, wiped out Philadelphia’s famed silk hosiery trade; parquet flooring and wall-to-wall shag carpeting decimated the city’s tapestry rug industry; men stopped wearing fine felt hats to the detriment of Stetson; and cheap hardware merchandized by Sears Roebuck and other mass distributors cut deeply into the sales of the magnificently crafted and durable saws of the Disston Saw Company.

Mass production and marketing systems promoting shifts in consumer preferences to inexpensive disposal products proved the death knell of Philadelphia industry as the city’s custom manufacturers—slow, unable or unwilling to react—failed to compete with standardized producers of goods elsewhere in the county and across the globe.  The loss was great not just for the city and its citizens; greater awareness and respect for workmanship and quality was lost as well. 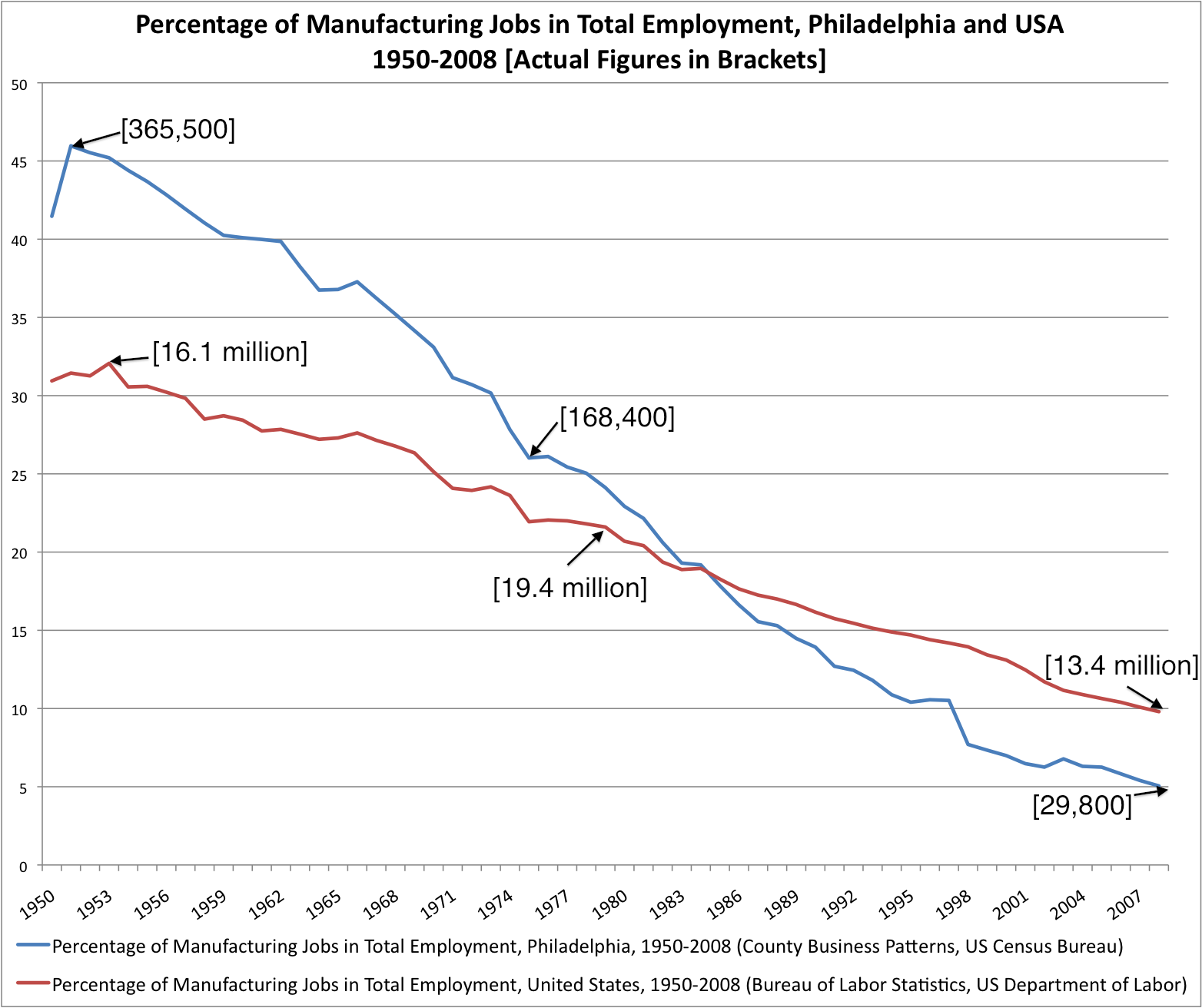