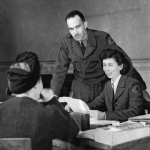 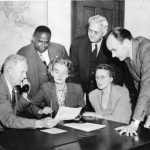 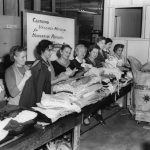 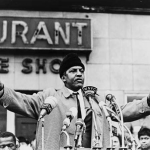 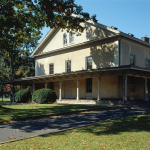 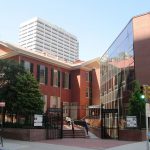 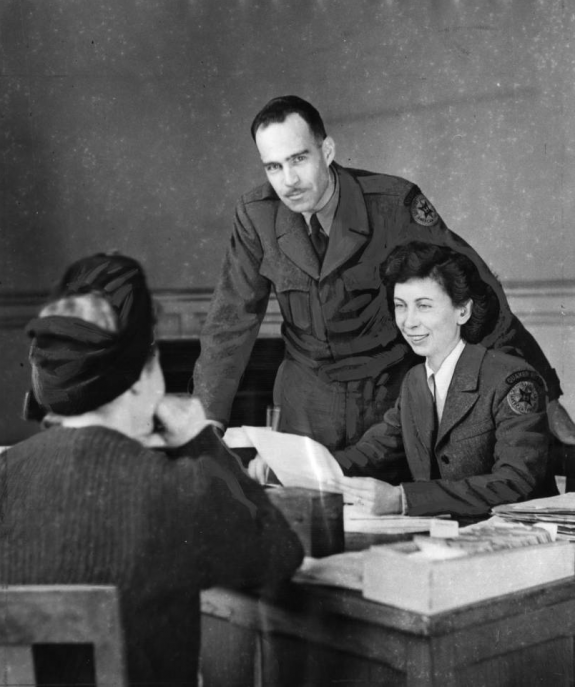 AFSC carried out relief programs in Germany, Russia, Spain, and France, among others. A large part of this work involved forwarding messages to the families of POWs. In this 1945 photograph, representatives from the Quaker delegation in Paris—Philadelphia native Marriott C. Morris Jr. (1900–92) and Mary Elmendorf (1917–2017)—interview a woman whose husband is in prison. 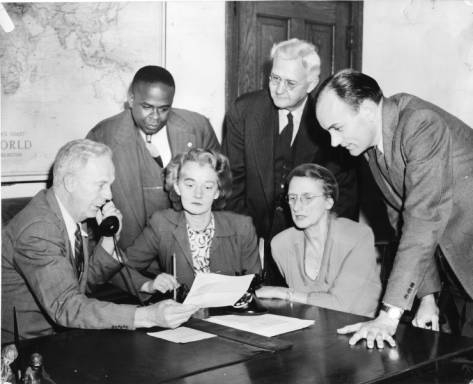 The American Friends Service Committee shared the 1947 Nobel Peace Prize with the Friends Service Council, the national organization of Quakers in Britain. The Norwegian Nobel Institute praised AFSC’s aid projects following World Wars I and II, with particular mention of the Committee’s work in France, Germany, and the Soviet Union.

In this 1947 photograph, Committee members gather around Executive Secretary Clarence E. Pickett (1884–1965) as he learns the AFSC has won an award—most likely the Nobel Peace Prize. 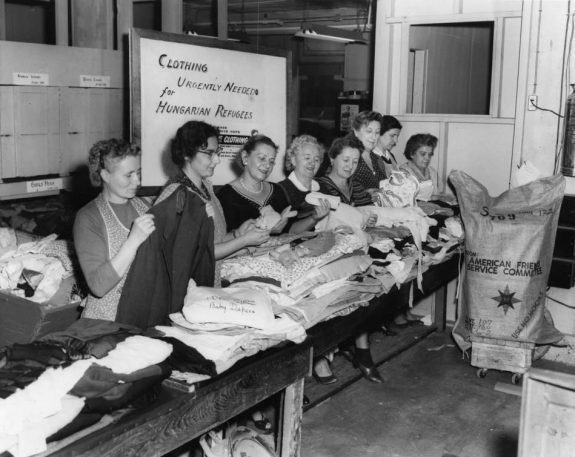 After World War II, much of AFSC’s work centered around international refugee aid. AFSC started delivering supplies to refugees in Gaza in 1948 at the request of the United Nations; during its ensuing decades-long presence in the Middle East, the Committee distinguished itself as one of the first organizations in the United States to call for Palestinian rights.

AFSC later began a campaign to provide materials to Hungarian refugees. In this 1956 photograph, volunteers at the AFSC warehouse at Twenty-Third and Arch Streets fold and wrap clothing for shipment to refugee camps in Austria. Other projects included aid to Africa during the Algerian War (1954–62) and assistance for civilians on both sides of the Vietnam War beginning in 1965. 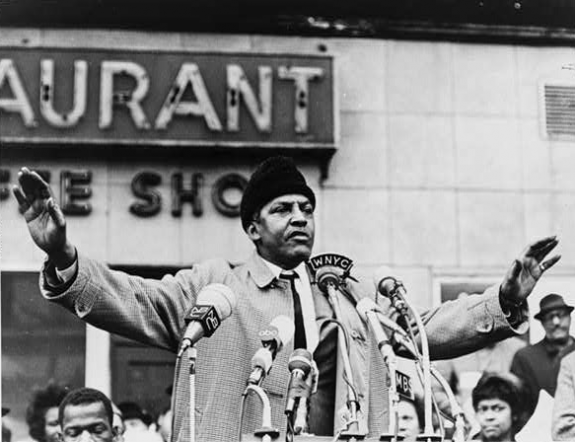 Bayard Rustin (1912–87), born to a Quaker family in West Chester, Pennsylvania, was a lifelong pacifist and strong supporter of peaceful protest. A gifted speaker and mentor, Rustin became a major figure in the American civil rights movement of the 1950s and 1960s.

Rustin co-authored a pamphlet with AFSC in 1955 titled Speak Truth to Power, which advocated nonviolent resolution of international conflicts. AFSC also published the first edition of Martin Luther King Jr.’s “Letter from Birmingham Jail” as a stand-alone pamphlet in May 1963.

Rustin co-organized the “Journey of Reconciliation,” a precursor to the Freedom Rides, in 1947 and served as the chief planner of the August 1963 March on Washington. In this 1965 photograph, he addresses a crowd in New York City. Rustin continued his advocacy work in the 1970s and 1980s through support of the human rights and gay rights movements. 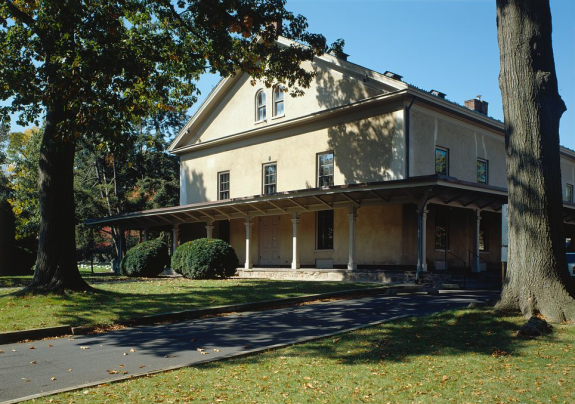 Addison Hutton (1834–1916) designed the Germantown Friends Meeting House on West Coulter Street, which was built between 1868 and 1869 by Hibberd Yarnall (1830–82) and his architectural team. The construction plan deviated from traditional meeting house layouts: designers placed benches along the width of the building rather than the length and included a small “committee room” for business meetings in the back, separate from the worship area. This created a more spacious and open main meeting room.

After the founding of AFSC in 1917, several Committee workers began attending Germantown Friends on Sundays. Although many meeting houses declined in the late nineteenth century, Germantown Friends continued to thrive as urban residents moved away from the city center. The site continues to host weekly Meetings for Worship and other community events; this photograph shows the meeting house c. 1999. 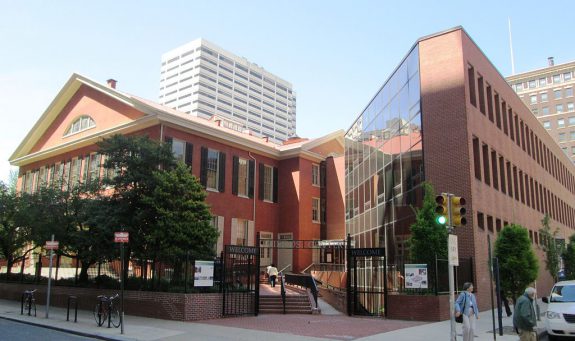 The Friends Center, located at 1501 Cherry Street in Center City, is advertised as "the Quaker hub for peace and justice in Philadelphia." The 56,000-square-foot office building hosts nearly forty tenant organizations, including the national headquarters of the American Friends Service Committee. The property also includes the still-active Race Street Meetinghouse, designated as a National Historic Landmark in 1993. (Photo Credit: Beyond My Ken/Wikimedia Commons) 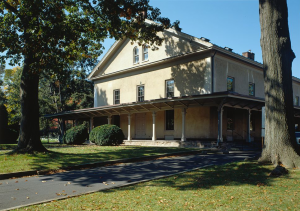 This c. 1999 photograph depicts the Germantown Friends Meeting House, attended by many AFSC workers in the organization’s early years. Built on West Coulter Street between 1868 and 1869, Germantown Friends continues to host weekly Meetings for Worship. (Library of Congress) 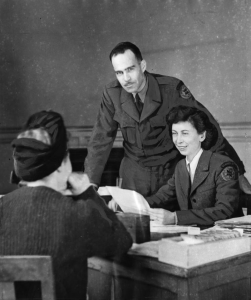 AFSC conducted service projects during and after World War II. One such project involved forwarding messages to the families of POWs; in this 1945 photograph, two Quakers interview a French woman whose husband is in prison. (Special Collections Research Center, Temple University Libraries) 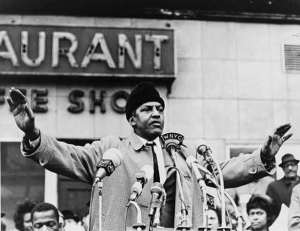 In this 1965 photograph, civil rights activist Bayard Rustin (1912–87) addresses a crowd in New York City. Rustin was raised a Quaker in West Chester, Pennsylvania, and later co-authored a pamphlet with AFSC titled “Speak Truth to Power.” (Library of Congress) 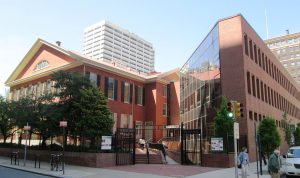 Guy Aiken holds a Ph.D. in Religious Studies (American Religions) from the University of Virginia and is a postdoctoral fellow at Villanova University. He has published several articles, including “The American Friends Service Committee’s Mission to the Gestapo” in Peace & Change, and “Educating Tocqueville: Jared Sparks, the Boston Whigs, and Democracy in America” in the Tocqueville Review.

McDaniel, Donna, and Vanessa Julye. Fit for Freedom, Not for Friendship: Quakers, African Americans, and the Myth of Racial Justice. Philadelphia: QuakerBooks of FGC, 2012.