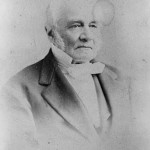 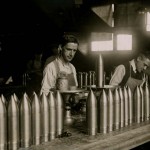 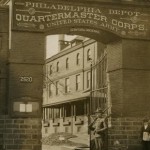 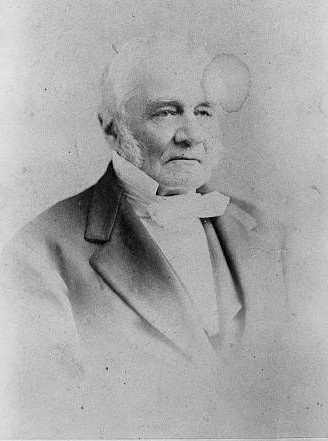 Alfred Mordecai (1804-87), commander of the Frankford Arsenal from 1836 to 1838, was one of the most notable soldier-technologists in the antebellum U.S. Army. Historian James J. Farley observed that, during his brief tenure, he was responsible for the arsenal’s transformation “from an ordinary military depot to an installation preeminent in the testing of gunpowder and other munitions.” 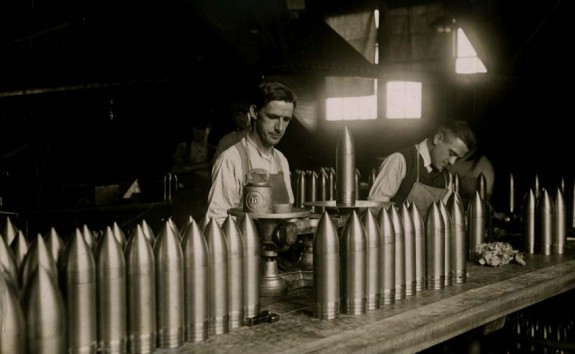 Turning Out Ammunition at Frankford Arsenal

The Frankford Arsenal, established in 1816, served as a site of small-scale weapons and ammunition manufacturing, such as the munitions pictured here. However, it was best known as a scientific testing ground for new military weapons. Some of the best-known weaponry products to have been developed at the arsenal are the Gatling gun, smokeless powder, the rocket-powered ejection seat, and laser rangefinders. 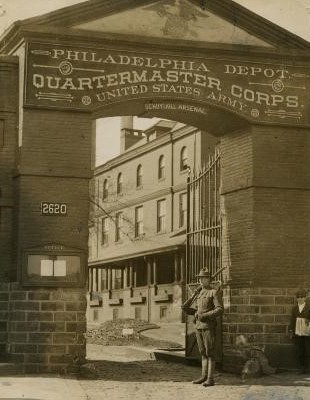 During World War I the Schuylkill Arsenal played a critical role in the war effort. While it was not big enough to meet the demands of the American Expeditionary Forces sent to fight in Europe, it was critical enough to be guarded by the National Guard.

For much of the nation’s history Philadelphia held a preeminent position as the provider of logistical support to the U.S. Army, and federal arsenals played a considerable role in the economic life of the city. The Schuylkill Arsenal and Frankford Arsenal were, respectively, the largest manufacturers of uniforms and small-arms ammunition in the country, often employing more workers than private industry. The Frankford Arsenal was also the site of innovations in mass production and munitions development.

The Schuylkill Arsenal, established by Act of Congress on April 2, 1794, occupied an eight-acre site between the east bank of the Schuylkill River and Gray’s Ferry Road. Constructed between 1802 and 1806, in its early years the arsenal operated as a storage depot for gunpowder, arms, and other supplies. (In 1803, the arsenal issued clothing, blankets, tents and equipment to the Lewis and Clark Expedition.) The functions of the arsenal changed after the War of 1812 and the opening of a new arsenal in Frankford in 1816. While Frankford superseded the Schuylkill Arsenal as an ordnance depot, the older site evolved into a clothing arsenal because of its proximity to textile mills. It ceased storing arms in the 1830s, and in 1842, after the Quartermaster Department acquired the site from a defunct supply agency, the Schuylkill Arsenal became a center for manufacturing, procuring, and distributing clothing, footwear, and camp equipage.

The Schuylkill Arsenal provided the Army with supplies either by contracting out requisitions to private firms or, when the contract system proved deficient, by manufacturing goods onsite. The arsenal’s bootee- (an ankle-length boot) and tent-making establishments, in particular, produced items superior to those acquired by contract. The arsenal also employed a large female workforce, which varied from 400 to 10,000 depending on military demand. While the men worked as packers, cutters, tailors, and laborers, women found jobs as seamstresses. Working from home, the seamstresses who obtained work directly from the arsenal sewed cut textiles provided to them, returned with finished uniforms, and received wages on a per-piece basis. Seamstresses hired by contractors, on the other hand, often worked in crowded sweatshops and received a fraction of what the public employees earned.

The low wages of seamstresses in Philadelphia and other cities drew criticism in 1833 from Philadelphia economist and publisher Mathew Carey (1760-1839), who argued in a series of essays that the women made too little to support themselves or their children. Seamstresses also began forming trade unions, organizing strikes, and writing petitions to improve their lot. In 1835, seamstresses and women employed in other trades organized the Female Improvement Society to protest inadequate wages. During the Civil War, arsenal seamstresses petitioned the War Department to set a minimum wage for both public and private sector workers and called for an end to the Army’s use of contractors. Although the petitioners met with President Abraham Lincoln (1809-65) and government workers received a pay raise, the practice of subcontracting continued. 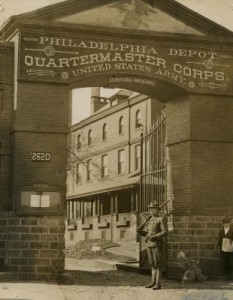 During World War I, troops from the Pennsylvania National Guard protected the Philadelphia Quartermaster Depot.  (Historical Society of Pennsylvania)

By the time of the First World War, the Schuylkill Arsenal’s site had become too small to meet the demands of outfitting the American Expeditionary Forces. The arsenal, renamed the Philadelphia Quartermaster Depot, moved in 1918 to a new location on Twenty-First Street and Oregon Avenue. From 1921 to 1941, the depot housed a quartermaster training school for commissioned officers, officer candidates, and enlisted personnel. It lost this function, however, when rapidly increasing enrollment during World War II resulted in the school’s removal to Fort Lee, Virginia. The arsenal served as a storage site until its closing in 1958.

Philadelphia’s second arsenal, in Frankford, served different purposes. Established by the Ordnance Department on May 27, 1816, the arsenal occupied twenty-two acres on the north bank of the Frankford Creek, near its confluence with the Delaware River. Equipped with a wharf, the site provided waterborne access to the Worrell gunpowder mills. Initially, the arsenal included four stone buildings arranged around a parade ground, and open land in the surrounding area offered the possibility of future expansion.

During the antebellum era, the Frankford Arsenal functioned as a depot for storing, repairing, and cleaning military equipment and weapons. On a small scale, the arsenal also manufactured ordnance, including paper cartridges, percussion caps, and musket balls. Arsenal commanders also awarded contracts to private firms such as the DuPont Company, whose gunpowder they inspected before shipping it to other posts. 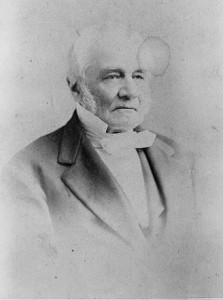 Alfred Mordecai turned the Frankford Arsenal into a proving ground for experimental weapons. (Library of Congress)

In the 1830s, the site began to develop from a small post used mainly for storage and procurement into a bustling industrial and scientific complex. In 1835, the Secretary of War made the arsenal the Ordnance Department’s only proving ground for gunpowder, and the site nearly doubled in size with the purchase of adjacent land in 1836 and 1850. Previously manned by about twenty-five soldiers plus a temporary civilian workforce, the arsenal expanded to employ hundreds of civilian workers.

During the Philadelphia nativist riots of 1844, the Frankford Arsenal faced the only threat to its security in its 161-year history. On May 8 in neighboring Kensington, mobs destroyed the Roman Catholic churches of St. Augustine and St. Michael’s and several homes belonging to Irish immigrants. The arsenal’s  commander sent arms and ammunition to Philadelphia County Sheriff Morton McMichael (1807-79). Rumors of an impending attack on the arsenal and a nearby church prompted the War Department to deploy reinforcements from a unit based in Fort Columbus, New York. Nothing came of the rumors, however.

In the ensuing years, commanders expanded the arsenal with a rolling mill, a laboratory for conducting experiments in ballistics and explosives, and a factory that produced more than one million percussion caps a month by 1853. Steam-powered machinery, introduced in 1852, hastened the transition from hand craftsmanship to industrial production. By 1864, the arsenal had become a manufacturing center that employed 1,226 civilian laborers and artisans, many of them from the neighboring community of Bridesburg.

Given the Frankford Arsenal’s role as a scientific testing ground, fires and explosions were common. In 1861, an explosion at one of the laboratories resulted in two fatalities and, in 1862, another destroyed part of the percussion cap factory. Arsenal commander Major Theodore T. S. Laidley (1822-86) responded to events such as these by constructing new buildings with wrought-iron frames, an innovation that allowed the beams and columns to withstand explosions even if the roofs collapsed and the walls blew out. 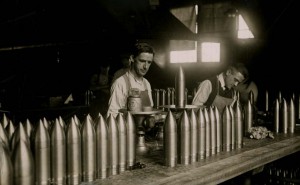 The Frankford Arsenal also served as a center for ammunition manufacturing for the U.S. Army. (Historical Society of Pennsylvania)

Throughout the late nineteenth and twentieth centuries, the Ordnance Department purchased more land and added an array of new buildings, including an optical shop for developing instruments and munitions. Engineers and scientists contributed to the arsenal’s already substantial catalogue of innovations by developing the Gatling gun, smokeless powder, 75mm and 105mm recoilless rifles, the rocket-powered pilot ejection seat, and laser rangefinder, to name a few. Production of munitions increased dramatically during the Spanish-American War, the two world wars, and the Korean War. At its peak, in 1942, the arsenal employed 22,000 workers and produced nearly all of the nation’s wartime supply of small-arms ammunition for that year.

In November 1974, the Department of Defense announced that the Frankford Arsenal would be closed. The move, part of a nationwide base reduction and consolidation process that began under Secretary of Defense Robert S. McNamara (1916-2009), drew criticism from residents and local politicians and became a bone of contention during the 1976 presidential election campaign. On Election Day eve, vice-presidential candidate Walter Mondale (b. 1928) visited the arsenal and promised to keep it open if the voters elected Jimmy Carter (b. 1924) president. The site had grown to more than 200 buildings on 110 acres of land and maintained a workforce of 2,000 people. The arsenal closed in the fall of 1977, but it later reopened as a business park.

The Schuylkill Arsenal and Frankford Arsenal played critical roles in U.S. military supply system during times of war and peace. They also contributed to Philadelphia’s status as one of the nation’s principal manufacturing and commercial cities.

Jean-Pierre Beugoms is a Ph.D. Candidate in History at Temple University. He is working on a dissertation about the logistics of the U.S. Army during the War of 1812.

Giesberg, Judith. Army at Home: Women and the Civil War on the Northern Home Front. Chapel Hill: The University of North Carolina Press, 2009.

Carey, Mathew. An Appeal to the Wealthy of the Land, Ladies as Well as Gentlemen, on the Character, Conduct, Situation, and Prospects of Those Whose Sole Dependence for Subsistence Is on the Labour of Their Hands. Philadelphia: L. Johnson, 1833.

U.S. Congress. The Statues at Large of the United States of America, from the Organization of the Government in 1789, to March 3, 1845. Edited by Richard Peters, Esq., Counsellor at Law. Vol. I. Boston: Charles C. Little and James Brown, 1845.