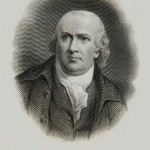 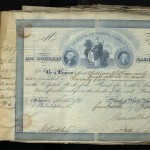 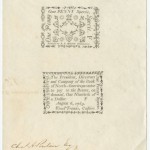 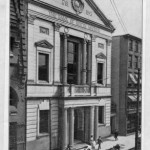 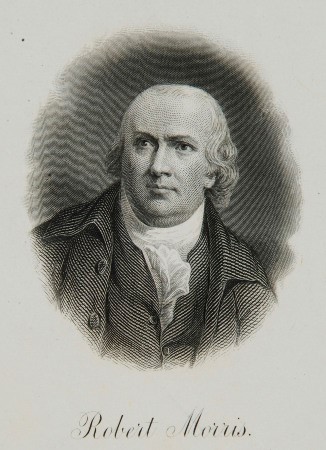 Robert Morris was the founder of the Bank of North America. Through political maneuvering in the Continental Congress, he succeeded in acquiring a charter for the new bank. Known for bold financial moves, he used his skills to keep the bank, and the nation, financially stable through the Revolutionary War. Risky financial moves in his later years landed him in debtor’s prison after a few bad deals. 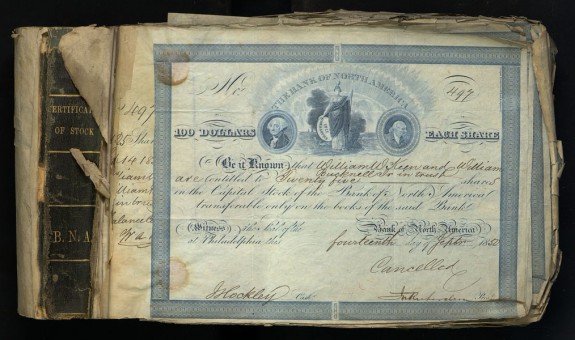 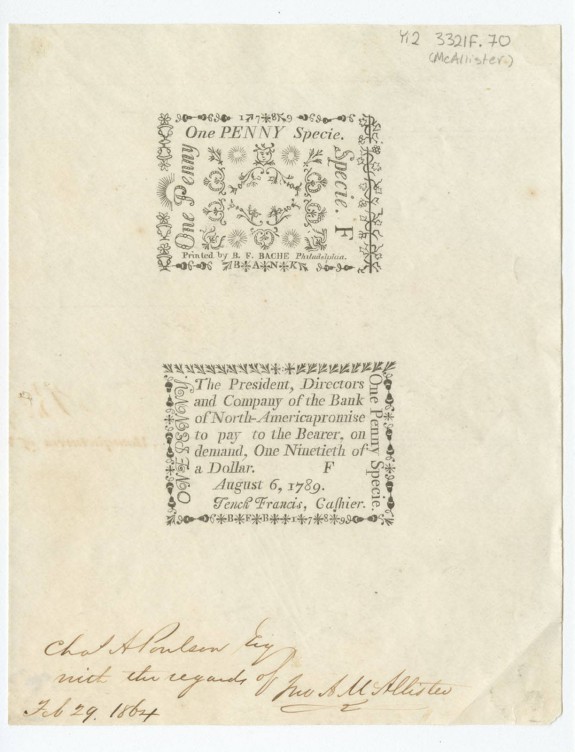 In the late eighteenth century as the new country was getting its footing, coined currency made out of precious metals and minted by governments was hard to come by. Banks and people had to rely on paper currency issued not by the government, but by banking institutions such as the Bank of North America, to keep the economy running. This image shows an example of paper currency issued by the Bank of North America, dated August 6, 1789, promising to pay the bearer of the note one penny worth of coined currency. 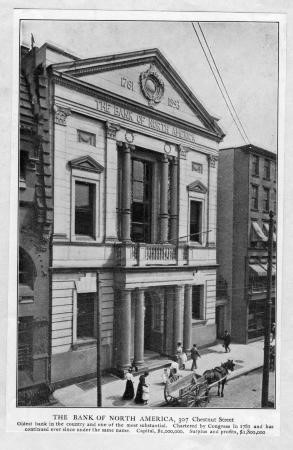 This photograph from 1900 shows the Bank of North America building at 309 Chestnut, the second of the bank’s buildings at the site. The first was the home of the bank’s original cashier, Tench Francis. Throughout the nineteenth century the bank’s operations continued to expand, and by 1900 the building in this picture was the headquarters for the bank’s operations. Today the Chemical Heritage Foundation occupies this address, with a modern building abutting the 1893 structure. 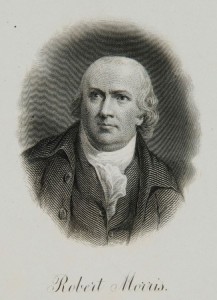 Robert Morris was the founder of the Bank of North America. (Historical Society of Pennsylvania)

Chartered May 26, 1781, by the Continental Congress under the Articles of Confederation, this enterprise was the first national and truly commercial bank in the United States. Officially titled The President, Directors, and Company of the Bank of North America (BNA) until 1825, the bank was the first created by the national government to do business with and for the government. Though Pennsylvania Bank was founded in 1780, it did little business apart from subscribers who in 1782 sold their shares to BNA, which expanded its financial connections.

Robert Morris (1734-1806), congressional superintendent of finance, crafted the charter and used the bank to stabilize the national currency and save the Confederation from bankruptcy. Ninety-nine Philadelphians, along with congressmen, subscribed to bank shares and the bank opened on January 7, 1782. Morris, famous for furtive dealings, used a $450,000 French silver shipment to Congress to fund the bank, which then lent the money back to Congress. Later, when the bank feared congressional loan default, Morris sold the government’s shares to repay the bank, which then re-lent the money to Congress. Through maneuvers like this, the bank kept Congress funded through the Revolution and built itself a secure reputation. 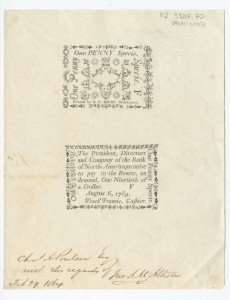 This 1789 One Penny Specie Note was issued by the Bank of North America during an era when banks acted as a middleman between citizens and the government treasury. (Library Company of Philadelphia)

BNA faced political controversy early on. Opponents argued it was an overreach of congressional power and a bastion for moneyed interests. Fears eased when bank directors chartered the bank in Pennsylvania giving BNA the unique distinction of holding two charters simultaneously. State politicians briefly revoked the charter in 1786. When the Confederation ceased, the national charter vanished and the bank operated under its state charter until 1864.  Out of the national spotlight, the bank increasingly became a tool of the Pennsylvania government, which protected it in exchange for favorable loan conditions. BNA was a model for the federal Bank of the United States, chartered in 1791 by Congress at the behest of Alexander Hamilton (1755-1804), a protégé of Morris. BNA, however, did little business with the federal government, aside from relatively small loans to the government during the War of 1812 and the Civil War. 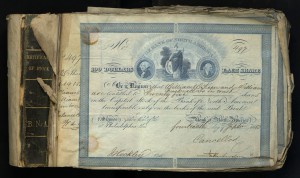 Stock certificate for the Bank of North America, indicating that the shareholder owns $100 worth of stock in the Bank. (Historical Society of Pennsylvania)

In 1863, seeking security, BNA applied to become “national” under the National Banking Act.  Participating banks received national charters but were required to purchase government bonds with fixed interest rates as well as accept minimum reserve requirements. Banks benefited from consistent interest income and a federal guarantee that if the bank failed, bank depositors would be reimbursed by the sale of bank-held government bonds. Granted national status in 1864, BNA was the only bank exempted from the requirement to add the word “national” to its title. 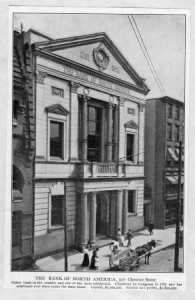 The Bank of North America building, built in 1893, in a photograph from 1900. (Historical Society of Pennsylvania)

BNA became part of the Federal Reserve System in 1914. It joined with Commercial Trust Company in 1923 to become The Bank of North America and Trust Company. In 1929, it merged into The Pennsylvania Company for Insurances on Lives and Granting Annuities, eventually renamed the Pennsylvania Company for Banking and Trust. BNA’s legacy became the First Pennsylvania Banking and Trust Company in 1955 after another merger, this time with the First National Bank of Philadelphia. In 1990, Core States acquired “First Pennsy,” which then First Union in turn acquired in 1998.  In 2001, First Union merged with Wachovia, which was then purchased by Wells Fargo in 2008.

The first building BNA occupied was at 307 Chestnut Street in the home of Tench Francis (1730-1800), the first cashier. That building and its opulent nineteenth-century replacement were later demolished, however, next door at 315 Chestnut Street the original main office of First National Bank survived (later becoming home to the Chemical Heritage Foundation). BNA lived on, though its identity did not.

Hammond, Bray.  Banks and Politics in America from the Revolution to the Civil War.  Princeton, N.J.: Princeton University Press, 1957.