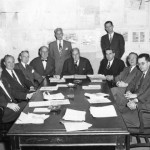 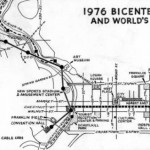 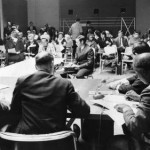 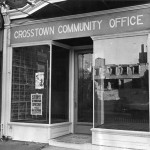 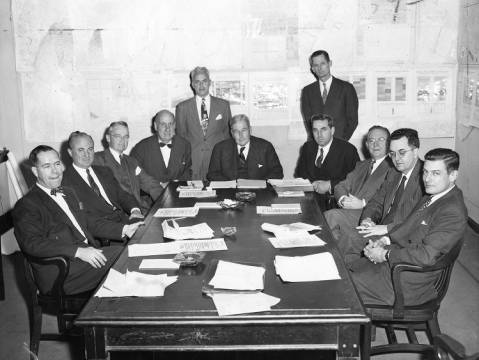 The Philadelphia City Planning Commission, shown here at a 1955 meeting, had plans for the Crosstown Expressway as early as 1930, when a “center city ring road” was proposed to lessen traffic congestion downtown. By 1953 a proposal was completed for a “center-city loop” that would include a highway between and parallel to Lombard and South Streets. By 1956, the Federal Highway Act promised 90 percent federal funding for the project and the expressway moved closer to becoming a reality, despite concerns from those living along the proposed route. 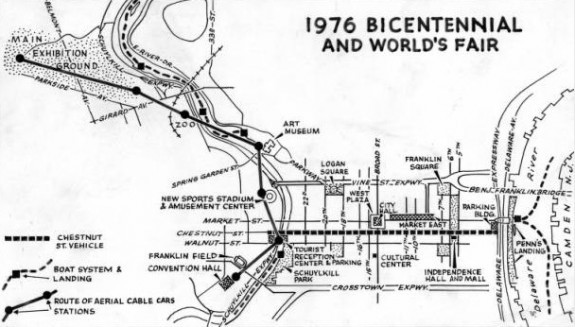 This map from 1963 shows planner Edmund Bacon’s original plan for the Bicentennial celebration, merged with a world’s fair. The main exhibition grounds in Fairmount Park are in the upper left portion of the map, with a boat system and cable-car route running along the Schuylkill and Delaware Rivers to transport visitors.

These plans included a new sports stadium and amusement center in the present day University City neighborhood, on the edge of Fairmount Park, as well as the completion of the Crosstown Expressway, shown near lower edge of the map in place of present-day South Street. Bacon’s plans, and specifically the Crosstown Expressway, were met with disagreement and pushback from citizens and other city developers. Consequently, most of these plans were not realized. However, the Vine Street Expressway, a northern counterpart to the Crosstown, was built in 1964 and Market East Station (in 2015 known as Jefferson Station) opened its doors in 1984. 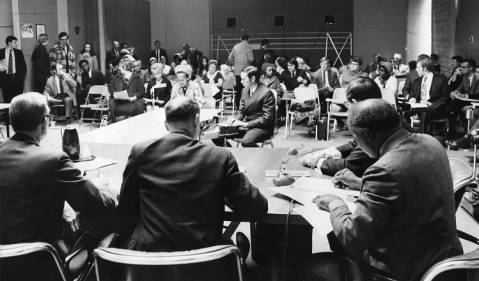 Roughly 35 witnesses spoke at the City Planning Commission’s annual public forum in January 1970. Here, one man testifies against the proposed Crosstown Expressway, which was given funding in the late 1950s but by 1970 was unbuilt. In the foreground, from left, planning commissioners Edmund Bacon, David G. Davis, and Joseph E. Coleman listened and took notes as, one after another, community members spoke out against construction of the expressway. 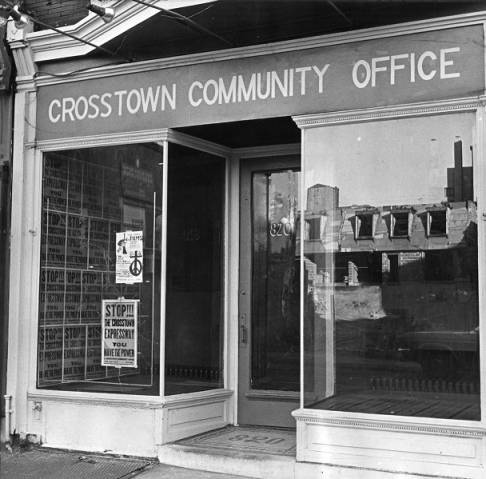 When the Crosstown Expressway was initially proposed, either South Street or Washington Avenue was going to face major redevelopment in order to accommodate the new highway. Though Washington Avenue had fewer residential homes, the possible damage to the rail line and historic buildings disqualified it from consideration. Instead, areas of South Street were marked as “blighted” and in need of redevelopment. Many places on and around South Street were bustling African American business and social centers, and the proposed entrance to the highway at Broad and South would have required the closing of the Royal Theater, the most popular and prominent venue for arts and culture in Philadelphia’s African American community.

In response to the proposed highway, residents of the neighborhoods surrounding South Street banded together to stop destruction of their community. Calling themselves the “Crosstown Community,” they rented office space, such as the storefront here at 820 South Street in December 1970. A row of homes in need of repair is visible in the reflection, because though the expressway was never built, the threat of its construction changed the neighborhood forever as many residents moved to find a better living situation.

The Crosstown Expressway, a proposed limited-access highway on the southern edge of Center City, became the subject of prolonged controversy during the 1960s and 1970s as redevelopment schemes met with neighborhood resistance. The envisioned highway first appeared in redevelopment plans for Center City during the 1940s and came to play a role in regional traffic planning. However, the most significant aspect of the expressway’s history was its defeat by popular protest by 1974.

In 1955, the city’s Urban Traffic and Transportation Board officially proposed a limited-access highway. It reasoned that the Crosstown Expressway would enhance the functioning of the regional freeway network as the southern segment of an inner loop connecting the Schuylkill Expressway and Delaware Expressway (I-95). For the same reasons the Greater Philadelphia Movement, a coalition of civic organization leaders, pressed to include the envisioned Crosstown in the Interstate system in 1957. Further planning was to be coordinated with the neighboring counties, a responsibility later assumed by the Delaware Valley Regional Planning Commission. 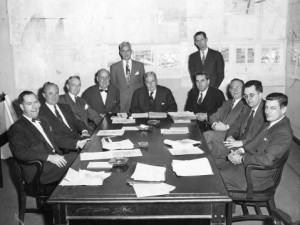 The Philadelphia City Planning Commission, shown here at a 1955 meeting, had plans for the Crosstown Expressway as early as 1930, when a “center city ring road” was proposed to lessen traffic congestion downtown. (Special Collections Research Center, Temple University Libraries)

By 1963, the proposed Crosstown Expressway became the focus of public debate. Citizens’ groups, most notably the Queen Village Neighbors Association, complained that the prospect of a highway was thwarting efforts to revive the neighborhood. Additionally, critics objected to dividing South Philadelphia from Center City and organizations such as the Philadelphia Housing Association and United Neighbors Association raised concerns about the relocation of residents. Confronted with these objections, planning for the expressway stalled. 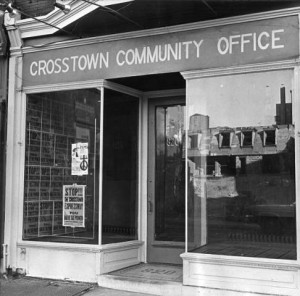 In response to the proposed highway, residents of the neighborhoods surrounding South Street banded together to stop destruction of their community.(Special Collections Research Center, Temple University Libraries)

Meanwhile, Bacon and the City Planning Commission changed their minds. Increasingly, the proposed expressway was seen as an obstacle to expanding the kind of redevelopment that had been successful in adjacent Society Hill. The CCPDCC’s preliminary work helped to convince the City Planning Commission to submit a proposal to the federal Neighborhood Development Program for small-scale redevelopment in the South Street area, similar to Society Hill.  Such a project also was incompatible with construction of an interstate highway, so when the federal government funded the redevelopment plan in 1971, it effectively ended prospects for an expressway. The Crosstown Expressway was formally deleted from the plans in 1974.

The Crosstown Expressway was by no means the only controversial proposal that came under attack in the late 1960s and 1970s. However, its defeat marked a turning point in the history of urban planning in Philadelphia. The successful opposition against the expressway became a precedent for the rising resistance against large-scale projects. The opposition’s alternative proposals for the South Street area highlighted the potential of the kind of small-scale neighborhood development that gained support during the 1970s.

Sebastian Haumann is Assistant Professor of History at Darmstadt University of Technology in Darmstadt, Germany. In his dissertation he compared protest movements against urban redevelopment in Philadelphia and Cologne.

Johnson, Harriet and Thomas Reiner. A Technical Critique of the Proposed South Street-Crosstown Expressway: Prepared for the Citizens Committee to Preserve and Develop the Crosstown Community. Philadelphia, 1968.

Reiner, Thomas, Robert Sugarman and John Seley. Citizen Participation in Planning: The Crosstown as a Case Study, and Some Recommendations. Philadelphia: University of Pennsylvania Wharton School of Finance and Commerce, 1971.

Scott Brown, Denise. “An Alternate Proposal that Builds on the Character and Population of South Street.” Architectural Forum 135,10 (1971): 42-4.

Verman, Marvin. “A Proposal to Use Existing Federal Mechanisms to Make this Expressway a Seam in the City’s Fabric.” Architectural Forum 135,10 (1971): 44-5.