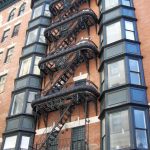 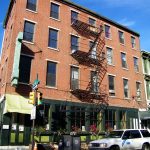 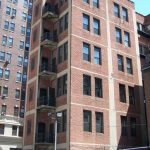 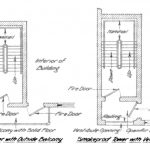 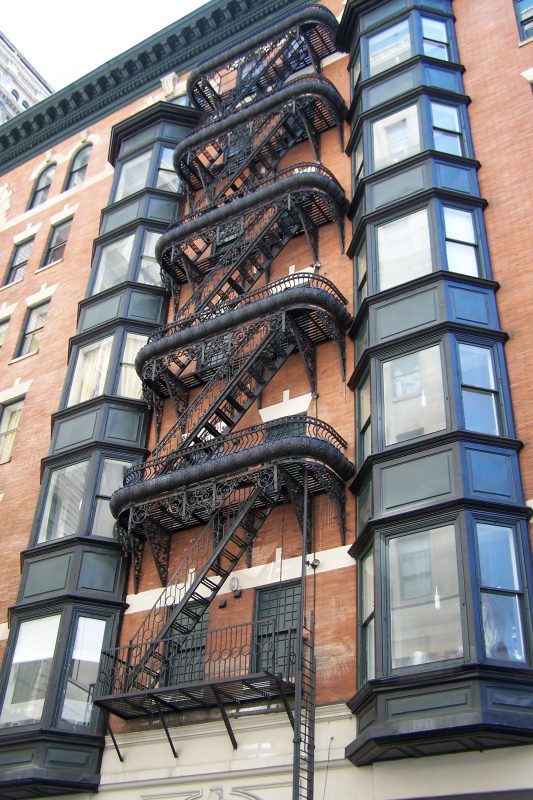 Philadelphia enacted the first municipal fire escape law in the United States in 1876. The chief engineer of the city’s fire department proposed the law in response to the large crowds anticipated at the Centennial Exhibition, as well as recent deadly factory fires. The ordinance created a Board of Fire Escapes, which was authorized to order the construction of a fire escape on any building. After the 1879 state law mandated that these fire escapes had to be external, some building owners constructed ornamental fire escapes because they felt that plain, exterior escapes disfigured the building. (Photograph by Sara Wermiel) 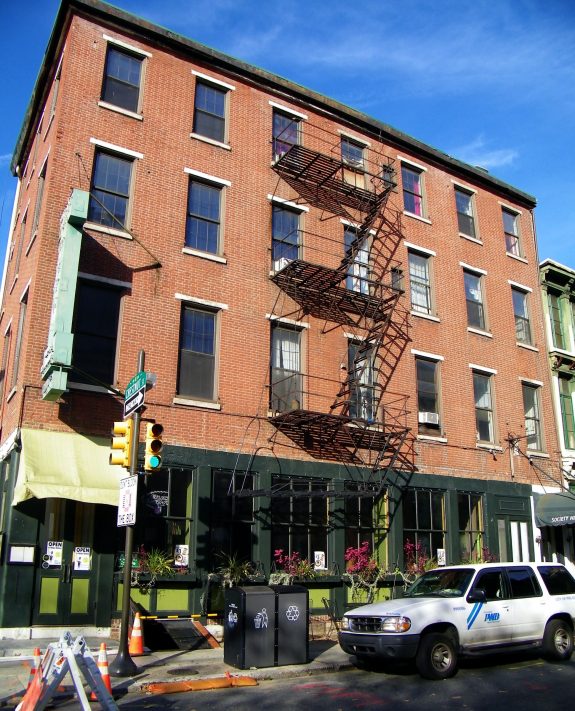 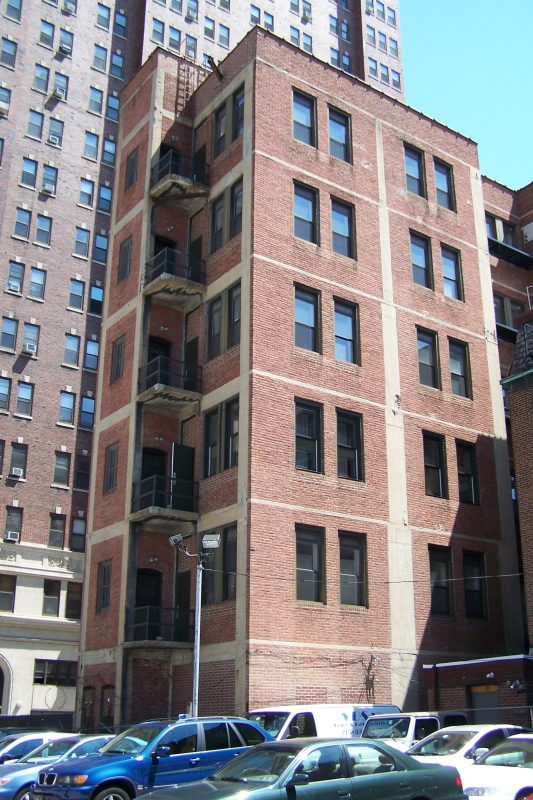 Late in the nineteenth century, fire escapes consisting of a stairway enclosed in masonry walls came to be required in factories. An 1893 building law expanded this mandate to large stores, requiring such buildings to have “a tower fire escape enclosed in incombustible material adjoining one of its fronts.” The enclosed stairs meant that smoke and fire could not enter. This design evolved into the Philadelphia fire tower. (Photograph by Sara Wermiel) 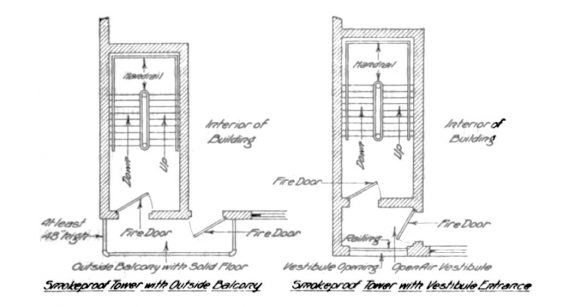 Philadelphia fire towers were usually constructed in one of two designs. The “balcony type” consisted of balconies on each floor with doors in the building connecting with doors in the stair tower. The “vestibule type” featured a landing recessed into the wall of the building which connected to a floor of the tower. Fire protection authorities considered the Philadelphia fire tower the best means of emergency egress. However, similar structures were rarely built outside of Philadelphia. (Illustration from Crosby-Fiske-Forster Hand-book of Fire Protection, 6th edition) 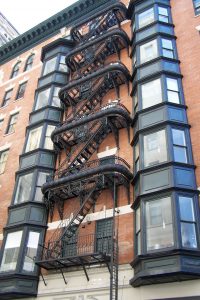 Many felt that outside fire escapes disfigured a building. Some building owners ordered ornamental fire escapes, like this one at Thirteenth and Chestnut Streets, to improve their appearance. (Photograph by Sara Wermiel) 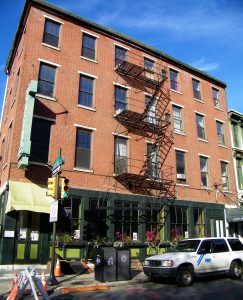 This external iron fire escape at Third and Chestnut Streets is accessed through windows. (Photograph by Sara Wermiel)

A deadly fire in a Philadelphia factory, Randolph Mills, on the night of October 12, 1881, exposed the possible catastrophic consequences of a lack of adequate egress. This large textile factory, on Randolph Street in North Philadelphia, was built in 1878–ironically, on the ruins of a mill that burned down the previous year. Before the first mill burned down, the Fire Escape Board had advised the owner to put up a fire escape. But even as he rebuilt the mill, the building owner did not do so–he considered fire escapes unnecessary. About forty people were working the night shift at the time of the second fire. The mill’s new electric lights were believed to have been the cause of the fire, which started on the second floor. Workers on the floors above became trapped when fire engulfed the building’s stairway. Many jumped from windows. Nine died in the fire or after jumping, five of them teenagers. Sixteen other employees suffered serious injuries.

The fire stirred public indignation and demands for government to compel mill owners to provide adequate means of emergency egress. The coroner’s jury found the building owner criminally responsible for the loss of life, and it also found the City of Philadelphia responsible for not enforcing the fire escape law. The horror of the tragedy–burned, crushed, and broken bodies–motivated city leaders to do something about fire escapes. A few days after the fire, Mayor Samuel King (1816-99, in office 1881-84) ordered the police to notify owners of factories, tenements, and other buildings to erect fire escapes, pursuant to the 1879 state act. However, police officers had no background in the design and installation of fire escapes. 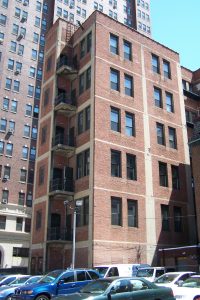 This example of a Philadelphia fire tower, on a building at Thirteenth and Walnut Streets, allows occupants to exit to a balcony and enter a door to the tower with a stairway. (Photograph by Sara Wermiel)

Later in the nineteenth century, fire escapes consisting of a stairway enclosed in masonry walls came to be required in factories and then other kinds of buildings in Philadelphia–a design that evolved to become the “Philadelphia fire tower.” Philadelphia’s 1893 building law called for various kinds of buildings to have stairways enclosed in brick walls or “incombustible” partitions. Large stores were to have “a tower fire escape enclosed in incombustible material adjoining one of its fronts.” Larger mills were to have “brick enclosed fire escapes” or other approved escapes. The design of these enclosed stairs developed into the Philadelphia fire tower–constructed so that smoke and flames could not enter. The towers were built usually in one of two forms. The “balcony type” had balconies at each floor connecting doors from the building with doors in the stair tower. A second “vestibule type” had a landing recessed into the wall of a building connecting a floor to the tower. Occupants would exit onto the balcony or the landing and then enter the door of the tower.

Sara E. Wermiel is a historian of building construction and the construction industry. She has a Ph.D. from the Massachusetts Institute of Technology. Her book, The Fireproof Building: Technology and Public Safety in the Nineteenth-Century American City (2000), treats the history of structural fire protection in buildings.