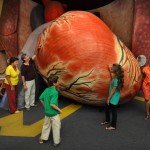 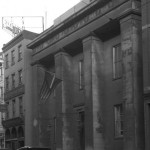 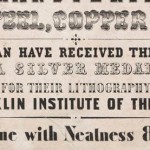 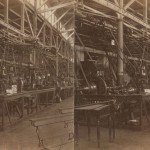 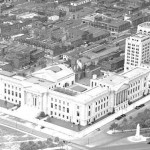 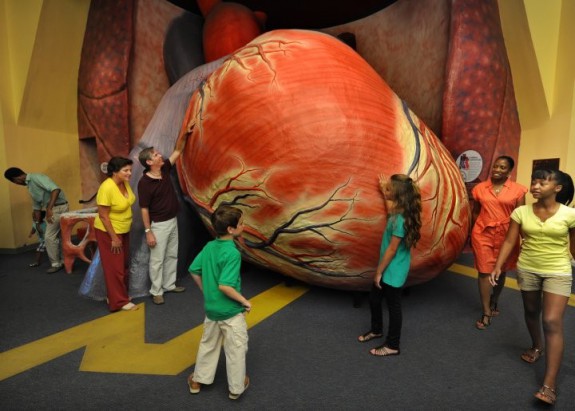 Giant Heart at the Franklin Institute

First opened in 1954, the Giant Heart (pictured here) became one of the best-known permanent exhibitions within the Franklin Institute. This family-friendly exhibit allowed visitors to walk through the chambers of the heart, exploring the physiology of the important human organ. (Photograph by R. Kennedy) 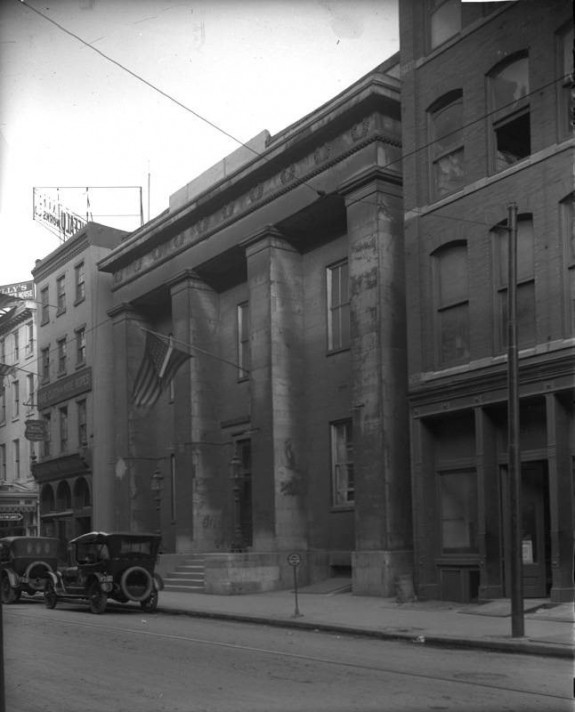 Founded in 1824 by a group of Philadelphians who sought to emulate Benjamin Franklin’s passion for useful science, members of the institute promoted mechanic arts in and beyond the city. The new institute was so popular that a little over a year after its founding it needed a new and permanent home. Construction on the building in this photograph, designed by architect John Haviland, began in June 1825. It served as the home of the Franklin Institute until 1934, when the museum moved to a new home on the Benjamin Franklin Parkway. The building in this photograph was saved from demolition when wealthy Philadelphian Atwater Kent purchased it and donated it to the city, to be used as a city history museum. Today it is known as the Philadelphia History Museum at the Atwater Kent.

During the nineteenth century the Franklin Institute held yearly exhibitions in which prizes and medals were awarded by the institution to the inventors of innovative products. Such prizes became sought after by manufacturers who treated the awards as a seal of quality. In this advertisement, the lithographers Wagner & McGuigan tout in an advertisement that they have won a Silver Medal, the highest award of quality offered by the institute. 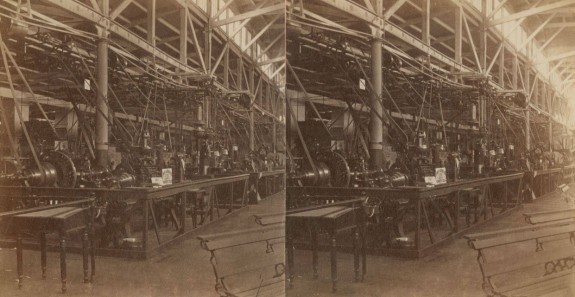 Stereoview of the Franklin Institute Exhibition 1874

Edwin Harrington, Son & Co., the makers of the tools, advertised products manufactured “on scientific principles,” a claim consistent with the Franklin Institute’s goal to diffuse scientific knowledge to enrich commercial manufacturing. Established in 1867, the company was located at the corner of North 1505 Pennsylvania Avenue by the late nineteenth century. The company specialized in turning lathes, drill presses, and planers of its own design. It additionally held a patent for a double-chain screw hoist; the efficiency of one such hoist was tested in an 1884 issue of the Journal of the Franklin Institute. 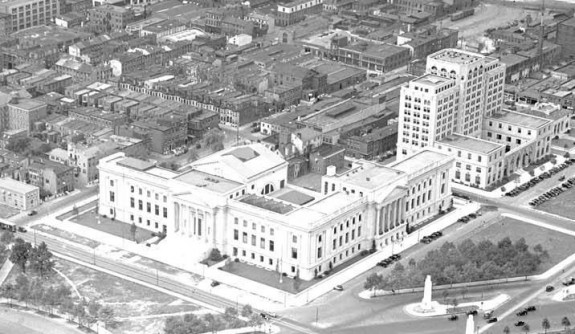 The new home of the Franklin Institute (the white building in the center foreground) quickly became a landmark. Designed by architect John T. Windrim in the Beaux-Arts style, the new building opened in 1934. The money for the new construction was raised in less than two weeks during the early stages of the Great Depression in 1930. The moving of the museum to the Benjamin Franklin Parkway marked the beginning of a gradual shift towards the institution becoming an influential center for popular science education. Among other features, it contained the Fels Planetarium, the second planetarium to open in the United States, as well as a large amount of Frankliniana, including a late-eighteenth-century lightning rod.

Manufacturers prized the Silver Medal of the Franklin Institute as a seal of quality, as shown in this advertisement for a lithography company. (Library Company of Philadelphia)

On February 5, 1824, a group of Philadelphians led by Samuel Vaughn Merrick (1801–70) and William Hypolitus Keating (1799–1840) met at the courthouse on Sixth and Chestnut Streets to found the Franklin Institute of the State of Pennsylvania for the Promotion of the Mechanic Arts. Seeking to emulate a passion for useful science, in the spirit of Benjamin Franklin (1706–90), institute members promoted mechanic arts in and beyond the city. The institute played a significant role in fostering technological innovation through the late twentieth century. Institute members had a longstanding interest in promoting science education, and the founding of a science museum in 1934 began to reorient the institute as an important local resource for K-12 outreach. 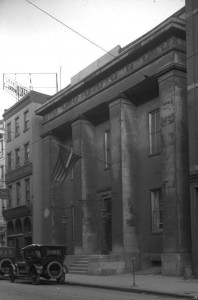 The early Franklin Institute outgrew its home on Seventh Street. Today this building, designed by architect John Haviland, is the Philadelphia History Museum at the Atwater Kent. (Library Company of Philadelphia)

Early members tended to be white male manufacturers and scientists. The institute’s first president, Scottish immigrant James Ronaldson (1768–1841), was the cofounder of the first American type foundry. The institute was immediately popular, and within the first year it needed its own building to accommodate the ever-growing membership. Famed architect John Haviland (1792–1852) designed the institute’s first long-term home, whose construction began June 8, 1825, at 15 S. Seventh Street. Women gained institute membership as early as the 1830s. The institute sponsored a women’s school of design from 1850 to 1853 (later the Moore College of Art and Design). In 1870, Octavius Catto (1839–71) became the first African American member of the Franklin Institute.

During its first century, the Franklin Institute became an important advocate for scientific research through the sponsorship of various activities and publications. It held its first exhibition in October 1824 honoring American industry at Carpenter’s Hall. Such exhibitions were held annually, and the medals and prizes awarded by the institute became a nineteenth-century standard for appraising the efficacy of a product. Many manufacturers included Franklin Institute awards in their advertising. The first issue of the Journal of the Franklin Institute appeared in 1826, chronicling new discoveries in physics, mechanical engineering, and chemistry. A variety of lecture series taught by professors employed by the institute or by traveling speakers offered practical scientific training to Philadelphia’s young men and women. By the end of the century, the institute’s reputation enabled it to negotiate on behalf of Philadelphia with the U.S. government. For example, in 1869, the Franklin Institute helped petition Congress to hold the 1876 Centennial Exhibition in Philadelphia. In 1873 it encouraged the government to undertake a statewide geological survey, later realized as the Second Geological Survey of Pennsylvania and later, in 1886, to establish a state meteorological service in the city. 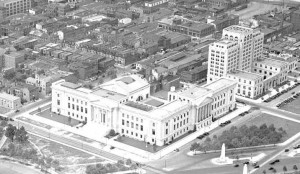 The Franklin Parkway home of the Franklin Institute (the white building in the center foreground) quickly became a landmark. Designed by architect John T. Windrim, the Beaux-Arts style building opened in 1934. (Library Company of Philadelphia)

In 1930, and despite the Great Depression, the Franklin Institute, in conjunction with the Poor Richard Club, began fund-raising to build a science museum. So beloved was the Franklin Institute that they raised $5.1 million in less than two weeks. By 1934, the new museum opened on the Benjamin Franklin Parkway, while its first home on Seventh Street was saved from demolition when Atwater Kent purchased the building and gave it to the city for a city history museum. This event marked a gradual shift towards reimagining the institute as an influential center for popular science education. The Parkway site included the Fels Planetarium, the second planetarium to open in the United States. One of the best-known permanent exhibits, the giant walk-through heart, opened in 1954. The family-friendly exhibit allowed visitors of all ages to explore human physiology by physically engaging with the space. Artifacts on long-term display included mechanical curiosities, such as an eighteenth-century Swiss automaton created by Henri Maillardet (1745–1830), and a significant amount of Frankliniana, including a period lightning rod.

The museum expanded in 1990, acquiring an IMAX theater, and again in 2012. In the twenty-first century, the Franklin Institute sponsored a number of successful educational programs including Science Leadership Academy (2006), a science-oriented magnet public high school with an emphasis on laptop-based learning, and the Philadelphia Science Festival (since 2011),  an annual nine-day, citywide celebration of science offering activities ranging from family-friendly fun to teacher training. Although not the arbiter of scientific innovation that it was in the nineteenth century, the Franklin Institute continued a tradition of making scientific education accessible to local Philadelphians.

The Journal of the Franklin Institute, Library Company of Philadelphia, 1314 Locust Street, Philadelphia.