Recorded earthquakes in the Philadelphia region have been relatively few and small in magnitude. Nevertheless, southeastern Pennsylvania has had the most seismic activity of all regions in Pennsylvania, perhaps emanating from stress on the North American tectonic plate that remained after the breakup of the continents about 200 million years ago. Some earthquakes felt in Philadelphia may have occurred along the Ramapo fault in New York, New Jersey, and Pennsylvania. Hard bedrock beneath eastern North America, allowing large transfer of energy, has caused quakes to be felt far from their places of origin.

Earthquakes occur when energy is released during movement on faults in the Earth’s crust; a fault is a fracture along which blocks of rock slide past one another. The strongest quakes have materialized at or near the boundaries of the tectonic plates, sections of the Earth’s outer layer that are in constant motion. During the twentieth century, scientists introduced two scales for measuring earthquakes: Giuseppe Mercalli (1850–1914) developed a scale based upon observations of structural damage and indications of how many people felt a quake, and in the 1930s Charles Richter (1900-85) and Beno Gutenberg (1889-1960) developed the Richter scale, which used seismographs and a logarithmic scale to measure an earthquake’s intensity.

The Philadelphia region experienced a number of quakes between 1737 and 1879, according to sediment analysis. These have been difficult to confirm through written records, which noted possible explosions, mine collapses, or quake-like events with no known epicenter. As an indication of the severity of a potential quake, some records noted that people fell down. New Jersey’s largest earthquake occurred during this period, in November 1783. This quake had an estimated magnitude of 5.3 on the Richter scale, and its aftershocks were felt in Philadelphia.

In 1812, the region felt the effects of a series of severe quakes with epicenters in New Madrid, Missouri. The quake of January 23, 1812, which was estimated to be between 7.3 and 7.6 on the Richter scale, was strong enough for Philadelphians to observe items in their homes swaying and perhaps falling off the walls or shelves. Other earthquakes originated locally, but had less severe effects. A quake in Wilmington, Delaware, on October 10, 1871, knocked over chimneys and caused other structural damage throughout the region, but a magnitude was not determined. In March 1889, an earthquake felt from Harrisburg to Philadelphia and Reading caused minor damage. Other minor quakes occurred in January 1954 in Sinking Spring, Berks County, and in December 1961 in the Philadelphia suburbs and southern New Jersey. Several other quakes occurred on the New Jersey side of the Delaware Bay and River, the largest on February 28, 1973 measuring 3.8 on the Richter scale.

In Pennsylvania, Montgomery County experienced a series of quakes during three months in 1980, the largest centered in Abington at magnitude 3.7 on March 11. The quakes—located around the Huntington Valley fault, running through Glenside, Abington, and Jenkintown—began on March 2, 1980. Because of the fault’s proximity to the Montgomery-Philadelphia county line, the city felt the larger quakes. The activity prompted Penn State University and the Lamont-Doherty Earth Observatory of Columbia University to place monitoring stations around the area. After the sequence ended, Temple University students distributed surveys to local residents to help determine the perceived intensity of the quakes.

Hard bedrock beneath eastern North America made it possible for residents of the Philadelphia region to feel the August 23, 2011, earthquake that emanated from Mineral, Virginia, and registered magnitude 5.8. The seismic waves of that event could be felt as far south as Georgia and as far north as Canada. In Philadelphia, it caused minor damage, mainly in the form of broken windows. The region experienced the shaking of another earthquake on November 30, 2017, when the largest known earthquake in Delaware occurred, measuring 4.1 on the Richter scale. Centered northeast of Dover, the quake caused little damage.

Seismic research has suggested that the Philadelphia region has the potential for larger earthquakes, but the extent is largely unknown. A Penn State University study estimated that 99 percent of seismic activity in the Commonwealth came from blasting, mining, and other man-made sources. One source of concern has been the increase of hydraulic fracturing for natural-gas extraction, which coincided with significant increases in seismic activity in other states, notably Oklahoma (where fracking injected wastewater into wells, triggering quakes). Geophysicists and other seismic researchers believe that Pennsylvania experienced its first man-made earthquake (measuring between 1.8 and 2.3 on the Richter scale) in 2016 as a result of natural-gas extraction near the Ohio border. As the Philadelphia region became more densely populated, more people lived in areas with elevated earthquake hazard.

Tokens of GOD's Power and Wrath

The science of seismology developed most significantly over the last 90 years, and earthquakes were poorly understood even through the early 20th century. Before the development of modern seismology, many of the explanations for earthquakes were based in religion, fearing the wrath of an angry deity. This piece published in 1744 in The Boston Weekly News-letter refers to earthquakes as "tokens of God's Power and Wrath" and "a Warning to Sinners and Comfort to the Children of GOD." 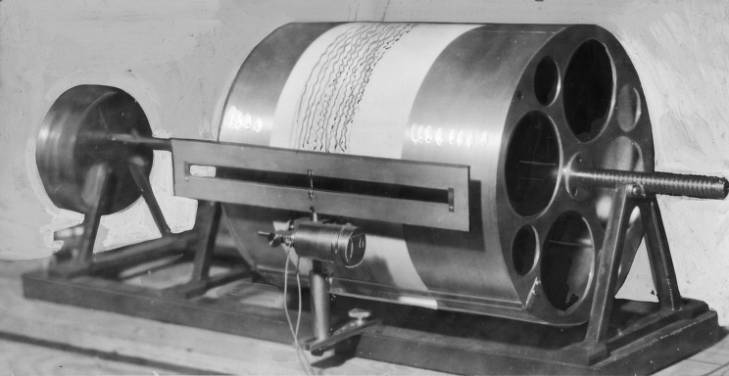 The Richter scale, which measures the intensity of earthquakes, was developed in the 1930s by Charles Richter (1900 - 1985) and Beno Gutenberg (1889 - 1960) at the California Institute of Technology. The Richter scale uses Arabic numerals and is logarithmic. As such, an earthquake that measures 6.0 on the Richter scale is ten times more intense than a 7.0. Earthquake data is recorded by a seismograph, like this model once housed at the Franklin Institute. Seismographs use the principle of inertia to record tiny ground movements, allowing seismologists to determine the magnitude, duration, and location of earthquakes. 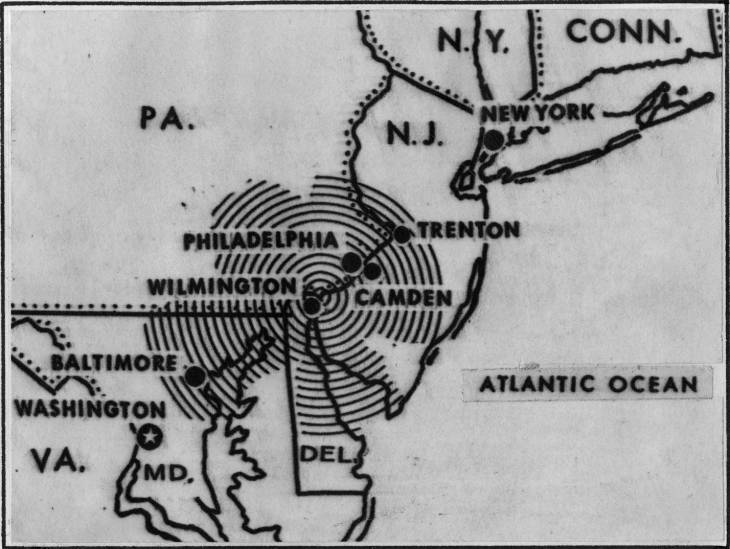 A magnitude 3.8 earthquake rocked the Philadelphia area in February 1973. One of the strongest recorded earthquakes in regional history, the tremors could be felt beyond Baltimore, Maryland and Trenton, New Jersey, many miles from its epicenter near Wilmington, Delaware. 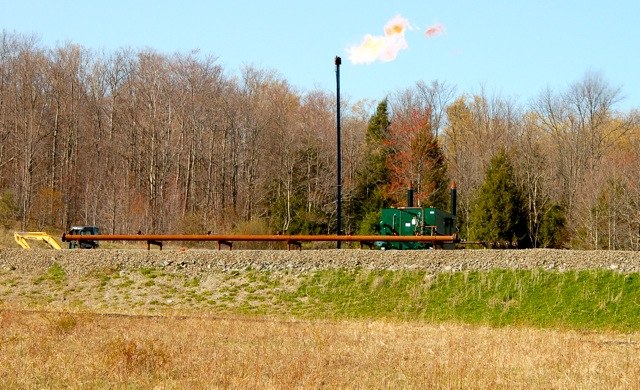 Geophysicists and seismic researchers believe hydraulic fracturing for natural gas extraction caused Pennsylvania's first man-made earthquake in 2016. Known colloquially as "fracking," the practice has been associated with a marked increase in seismic in other states, most notably Oklahoma. This 2008 photograph shows a fracking operation in Warren County, western Pennsylvania. 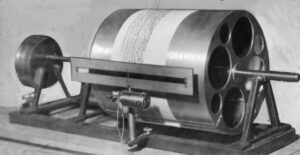 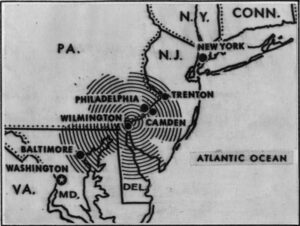 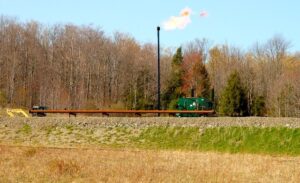 Winchester, Simon. A Crack in the Edge of the World: America and the Great California Earthquake of 1906. New York: Harper Collins, 2005.