The Greater Philadelphia area’s position near the Atlantic Ocean has made it vulnerable to hurricanes and tropical storms, especially along the Delaware and New Jersey shores, and to flooding from storm surges along the Delaware River. The majority of storms to hit the region have been tropical storms, because hurricanes have tended to weaken over the colder waters of the North Atlantic.

Atlantic hurricanes and tropical storms, part of the family of rotating storms that also includes cyclones and typhoons, rotate around a central “eye” and create high winds and heavy rains. During the Atlantic hurricane season, primarily from June through November, these storms typically have formed off the western coast of Africa (near Cape Verde) and have moved with the trade winds toward the Caribbean and the eastern United States. Since 1973, meteorologists have classified the storms as tropical depressions, tropical storms, or hurricanes based on sustained wind speeds, with hurricanes ranging from Category 1 (74–95 miles per hour) to Category 5 (157 miles per hour or higher).

The history of hurricanes to hit the region is well documented because of early interest in the sciences. In 1644, the Reverend John Campanius Holm (1601-83) created the first American weather records at Swede’s Fort near Wilmington, Delaware. Benjamin Franklin (1706-90) studied the forward or “progressive” movement of hurricanes during the Eclipse Hurricane of 1743, the first storm to be measured with scientific instruments. Scientists also have found evidence of the strength of storms during this era through geological markers, such as changes in sediment. The Great Storm of 1693 was strong enough to alter the coastline of the Delmarva Peninsula.

The increased professionalization of the sciences in the nineteenth century produced clearer and more consistent records of notable storms. The Snow Hurricane of 1804 made landfall in Atlantic City in October, although the snow did not fall until the storm reached New England. The Norfolk and Long Island Hurricane of 1821 made landfall in Cape May, New Jersey. Equivalent to a Category 4 storm (130 to 156 mph), it affected much of the Philadelphia area with high winds and storm surge. In 1846, the Havana Hurricane caused storm surge throughout the Delaware Valley and caused extensive damage to Philadelphia wharfs.

In 1851 the National Oceanic and Atmospheric Administration started keeping hurricane records, which increased knowledge about storms during the second half of the nineteenth century. The Expedition Hurricane of 1861, a late season storm, coincided with the American Civil War. The storm delayed a naval expedition on its way to the Battle of Port Royal and damaged some ships. The storm’s damage to New Jersey rail lines hampered the Union war effort. Another storm of this era, the Gale of 1878, was no longer a full-fledged hurricane by the time it reached the mid-Atlantic region, but it caused extensive flood damage in Delaware and New Jersey (which had not yet fully recovered from damage to river banks from the San Felipe Hurricane two years earlier). High winds injured church steeples in Pennsylvania.

The frequency of storms hitting the Philadelphia area has varied with the position of a ridge of high-pressure centered over the central and western Atlantic. Whenever this ridge has been closest to the United States, it has pulled more storms toward the mid-Atlantic region; when the ridge is farther away, storms have been more likely to strike elsewhere. In the period of 1851 to 2012, the majority of Mid-Atlantic storms (60 percent) approached from the south, following the coast. Others took alternative tracks, either through the Piedmont region of North Carolina (11 percent) or along the Appalachian Mountains (11 percent). Rare storms have approached from the southwest and crossed the Appalachian Mountains.

During the early years of the twentieth century, the Mid-Atlantic experienced few storms while some of the strongest hurricanes on record struck places like Galveston, Texas, and Miami, Florida. The Great New England Hurricane of 1938, nicknamed “The Long Island Express,” primarily affected Long Island and New England. Before it made landfall, however, it caused flooding and wind damage along the New Jersey coastline, including at Atlantic City, Brigantine, and Wildwood.

Cycles of Twenty to Thirty Years

In addition to the effects of the Atlantic ridge of high-pressure, climate variations known as the Atlantic Multidecadal Oscillation (AMO) have caused storm activity to vary in increased and decreased annual activity over cycles of twenty to thirty years. Following the inactivity of the early twentieth century, hurricane seasons became especially active again during the 1950s. In 1953, the World Meteorological Organization began giving the storms female names, a system aimed to improve communication with the public and standardize storm tracking. The system changed in 1979 to alternate names between male and female. In mid-October 1954, Hurricane Hazel came ashore in North Carolina and affected inland areas of Pennsylvania as a Category 1 storm, causing flooding and uprooting trees before moving into Canada. In August 1955, Hurricanes Connie and Diane struck the area within a week of one another. Connie caused flooding throughout the Greater Philadelphia region, but the drought conditions at the time in Delaware decreased the level of destruction. However, record flooding occurred in the Poconos and along the Delaware River when Diane hit the same areas of the region only five days later.

In the 1980s and 1990s, the mid-Atlantic region experienced a few major storms, primarily tropical storms or depressions. Hurricane Gloria in 1985 produced high winds, including a peak gust of 81 miles per hour in Ocean City, New Jersey, and caused extensive flooding throughout the Delaware Valley. Tropical Storm Floyd (1999) started out as a strong Category 4 hurricane in the Caribbean. Although it weakened as it traveled up the Eastern Seaboard, the storm caused widespread flooding and power outages across New Jersey and much of central and eastern Pennsylvania. Tropical Storm Allison (2001) formed in the Gulf of Mexico, hitting Texas and Louisiana before heading toward the mid-Atlantic region on a rare over-land path. Despite never evolving into a hurricane, Allison was especially destructive. The Philadelphia area saw extensive flooding, including in Bucks County, where the Neshaminy Creek crested at almost seventeen feet. In Montgomery County, flooding caused a gas explosion that killed six.

Hurricanes Irene (2011) and Sandy (2012) struck the Jersey shore unusually hard. On August 28, 2011, Hurricane Irene made landfall on Brigantine Island and caused extensive flooding throughout New Jersey, Massachusetts, and Vermont. It also spawned tornadoes and caused storm surge along the New Jersey coast. Hurricane Sandy hit late in the 2012 season on October 29 and 30, starting out as a fairly weak hurricane that quickly strengthened over the Bahamas. Although no longer at hurricane strength by the time it reached the Jersey Shore and reclassified as a “post-tropical cyclone with hurricane force winds,” Superstorm Sandy made landfall at Brigantine, New Jersey, and exceeded most officials’ expectations in destruction to the shore, New York City, and other coastal areas. Ignoring evacuation orders, many stayed behind and risked the floods, winds, and storm surge. Because the storm occurred late in the season, many people simply had not prepared for a hurricane. The extraordinarily large storm caused 1.2 million power outages in Pennsylvania alone.

Storms such as Sandy and Irene suggested that climate change could be affecting the strength and frequency of strong hurricanes hitting the mid-Atlantic region. During the period from the 1970s through the second decade of the twenty-first century, the number of Category 4 and 5 storms approximately doubled. Although rotating storms strengthened around the world, the North Atlantic appeared to be more affected by the increase in ocean temperatures. Higher sea levels have created an increased risk of destructive storm surge, and as populations have become denser in coastal areas, more people in the greater Philadelphia region have been at risk of being in the path of a hurricane or tropical storm.

Megan C. McGee Yinger earned her Ph.D. in American Studies from Penn State University-Harrisburg. She is working on a project that explores how American media prepare for and cope with natural and man-made disasters. (Author information current at time of publication) 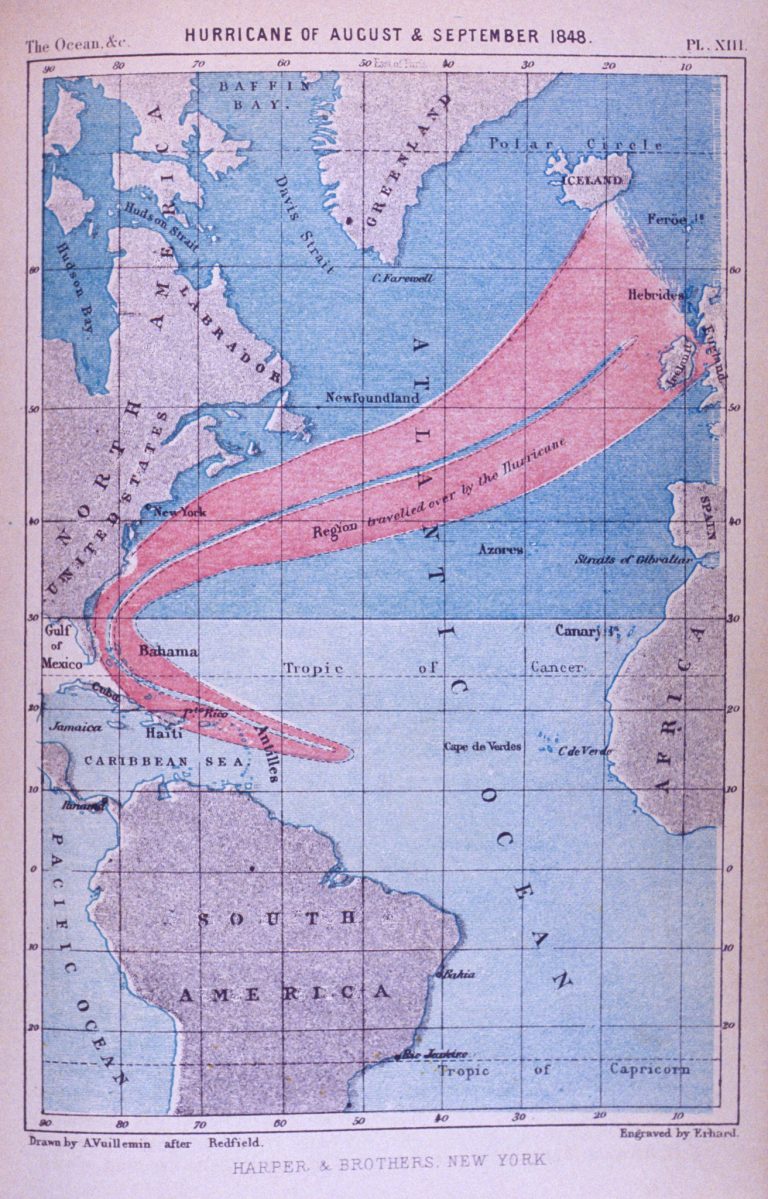 A hurricane of August/September 1848 is pictured in The Ocean, Atmosphere and Life, by Elisee Recluse, published in 1873. The illustration is one of the earliest storm tracks of a single hurricane showing its northwestwardly path and then curvature back to the northeast. 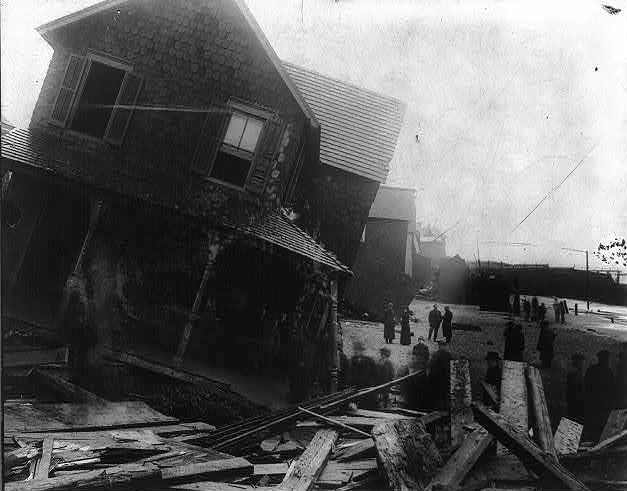 Based on wind speed (at least 38 miles per hour), meteorologists classify storms as tropical depressions, tropical storms, or one of five categories of hurricane using the Saffir-Simpson scale. This scale uses sustained wind speeds to measure the strength of a storm and assists authorities and citizens in estimating potential damage. The scale starts at Category 1 (74 – 95 miles per hour) and tops out at a Category 5 (157 miles per hour or higher). A major criticism of the Saffir-Simpson scale is its focus on wind speed alone, which does not take flooding or rainfall into account, but the scale is simple and easy for the public to understand.

Although the photo is dated c. 1914, hurricane season for that year was the least active on record. No hurricanes made landfall, and only one tropical storm formed. On average, 11.7 named storms occur each season, with an average of 6.3 becoming hurricanes and 2.4 becoming major hurricanes (Category 3 or greater). The most active season was 2005, during which 28 tropical cyclones formed, of which a record 15 became hurricanes and seven became major hurricanes. Not all of these made U.S. landfall.

The map shows rainfall totals during the Great Hurricane of 1938, also known as the “Long Island Express.” The storm primarily affected Long Island and New England. Before it made landfall, however, it caused flooding and wind damage along the New Jersey coastline, including at Atlantic City, Brigantine, and Wildwood. New Jersey coastal areas and some points inland received up to seven inches of rainfall. 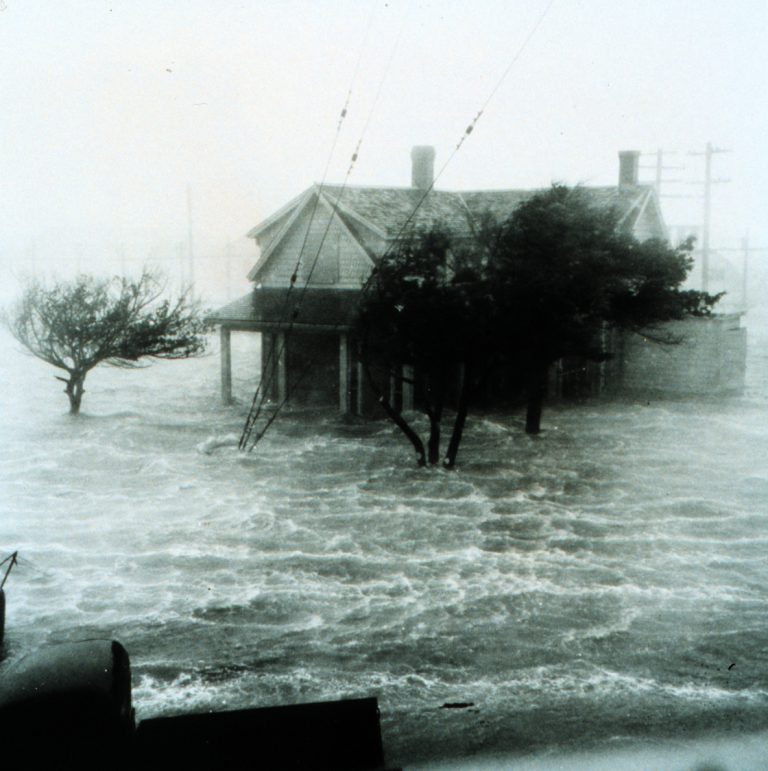 Storm surge is an abnormal rise of water generated by a storm, over and above the predicted astronomical tide and is produced by water being pushed toward the shore by the force of the winds moving cyclonically around the storm. Along the coast, storm surge is often the greatest threat to life and property from a hurricane. Battering waves may increase damage to buildings directly along the coast. Water weighs approximately 1,700 pounds per cubic yard; extended pounding by frequent waves can demolish any structure not specifically designed to withstand such forces.

Surge makes it possible for waves to extend inland. This photo of a storm surge is undated and its location unknown, but it shows the danger storm surge can pose. 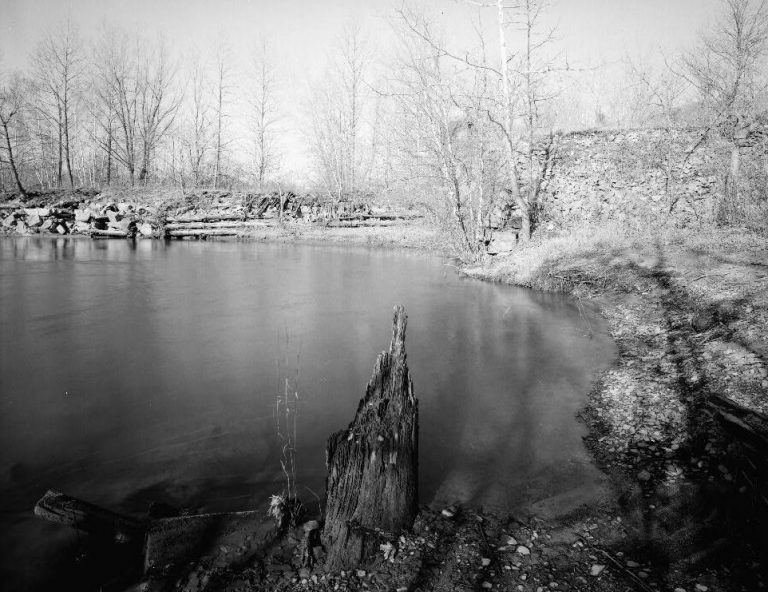 Originally built in 1829, the Lehigh Canal Slate Dam has been rebuilt several times. The last time was in 1902, after it was carried away in that year’s great flood. Hurricane Diane breached the dam in August 1955. Hurricanes Connie and Diane struck the Greater Philadelphia region within a week of one another. Connie caused flooding throughout the area but left little damage in drought-stricken Delaware. Record flooding occurred in the Poconos and along the Delaware River when Diane hit the same areas of the region only five days later. 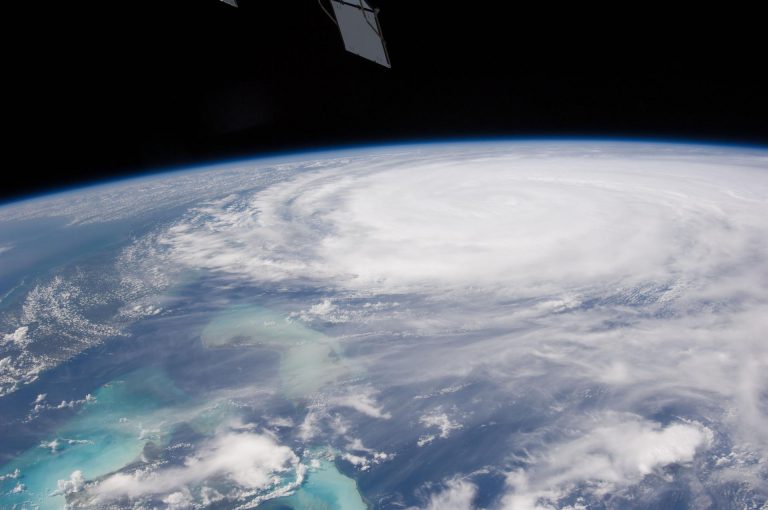 This image of Hurricane Irene on August 26, 2011, was photographed by one of the Expedition 28 crew members on board the International Space Station. The eye was at 31.2 degrees north latitude and 77.5 degrees west longitude moving due north 360 degrees at 14 miles per hour. Winds were 98 miles per hour, gusting to 120.8 miles per hour. Part of Florida's peninsula can be seen on the left and the northwest Bahamas are in lower left. Hurricane Irene made landfall on Brigantine Island on August 28, 2011, and caused extensive flooding throughout New Jersey. 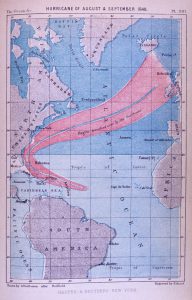 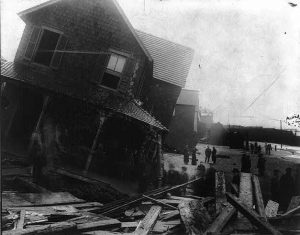 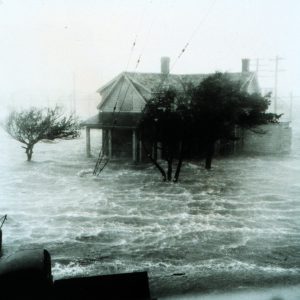 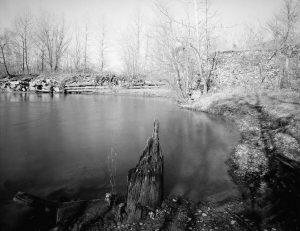 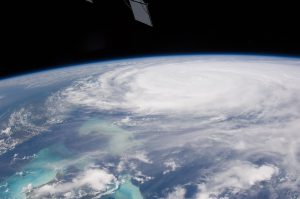