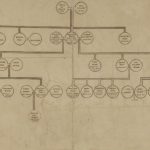 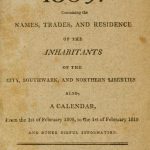 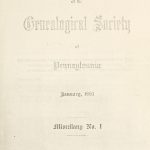 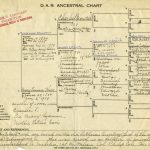 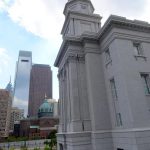 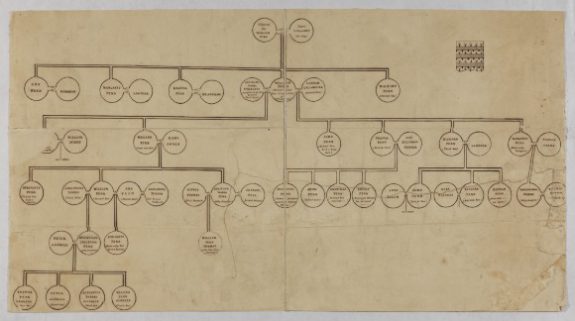 In the Delaware Valley and the United States, the study of genealogy transformed from a pursuit of the elite in the nineteenth century into the most democratic field of historical research. The growth of genealogical research has led to the combining of government and private records originally created for other uses.

This genealogy chart for Admiral Sir William Penn (1621-70) and Dame Margaret Jasper (1644-96) shows their immediate descendants. The most notable is their first son, William Penn (1644-1718), the founder of the Pennsylvania colony. While the chart does not have a date, the youngest descendant listed, William Penn Gaskill (bottom left and to the right), was born in Missouri in 1856. 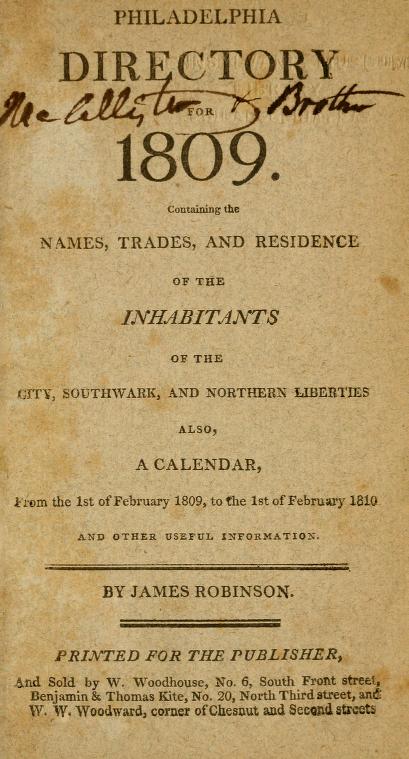 A valuable resource for genealogical researchers in the Philadelphia area, the Philadelphia Directory, shown here from 1809, provided a list of the city’s residents, business, and other citywide developments. The directory in this image focused on the early suburbs of Philadelphia known as Southwark and Northern Liberties, which became part of the city following the Consolidation Act of 1854. There are sixty-nine volumes of the Philadelphia directory available for research covering the years 1785 to 1867. Many of the volumes have been digitized and are available for research online through Archive.org. 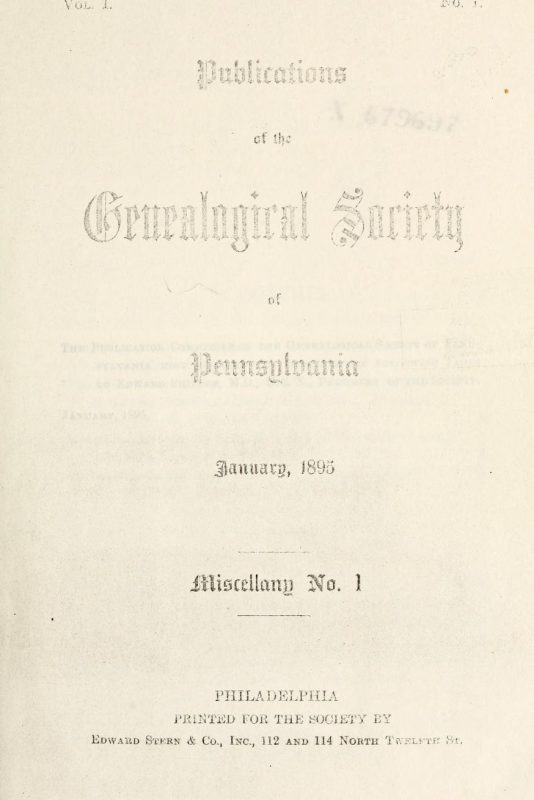 Publications of the Genealogical Society of Pennsylvania, 1895

The 1895 Publications of the Genealogical Society of Pennsylvania featured sections on The Sailing Ship “Submission” in 1682, with a true copy of the Vessel’s Log (Page 7); Inscriptions on Some Ancient Tombstones, formerly in the Burial Ground of the First Presbyterian Church on Bank Street, Illustrated (Page 14); John Hart, Governor of Maryland, 1714-1720 (Page 28); Some Data concerning the taking of Wolves in New Castle County, in 1676; and a Reprint of the Taxables (Page 29), and Notices of the Justices of New Castle (Page 35). 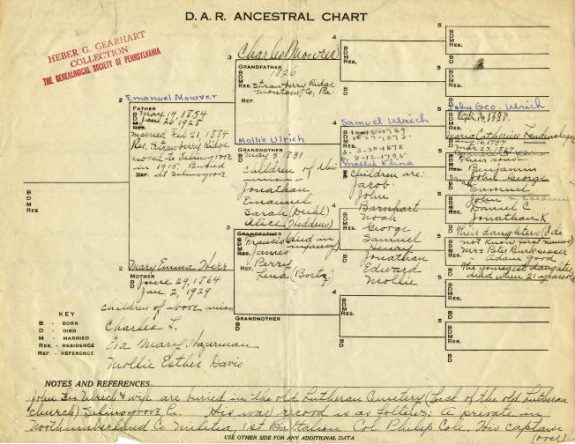 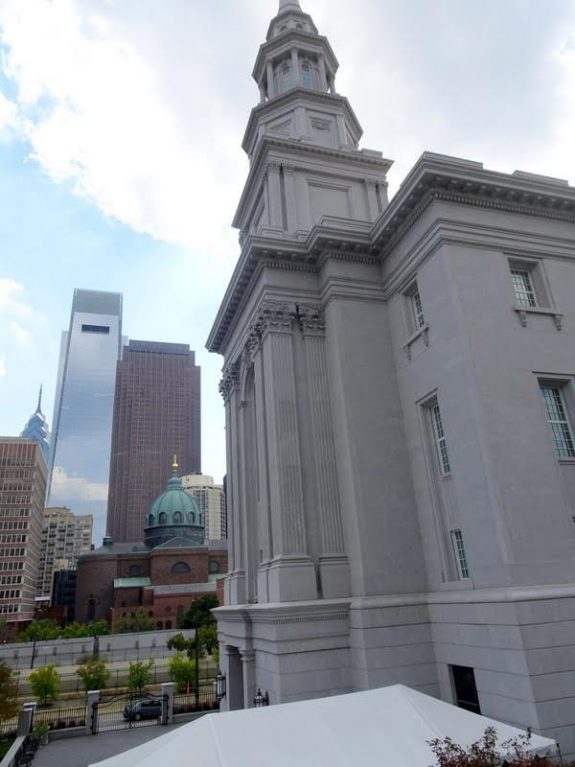 The Church of Jesus Christ of Latter-day Saints (also known as the LDS Church or Mormon Church) has long been a leader in genealogical research. In Philadelphia, Mormons expanded their local presence in area communities through genealogical outreach, creating ten Family History Centers beginning in the 1960s.

The Mormon presence in the Philadelphia area became even more visible in 2016 with the opening of a new Mormon Temple at 1739 Vine Street. The temple complex has a family history center nearby. The temple, shown here in 2016, is only accessible to members of the LDS Church.

To facilitate access for genealogical research, the Genealogical Society of Utah, the genealogical arm of the Mormon Church, developed the free website familysearch.org and the for-profit firms Ancestry.com and Fold3.com, which delved into various archives and historical societies to digitize records of genealogical value. (Photograph by Donald D. Groff for The Encyclopedia of Greater Philadelphia)

In the Delaware Valley and the United States, the study of genealogy transformed from a pursuit of the elite in the nineteenth century into the most democratic field of historical research. The search by genealogical researchers for materials of importance that assist with pedigree building, family histories, and searches for heirs has resulted in the combining of government and private records originally created for other uses. 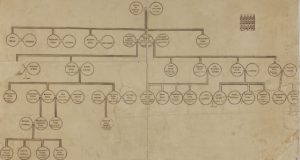 This genealogy chart for Admiral Sir William Penn (1621-70) and Dame Margaret Jasper (1644-96) shows their immediate descendants. The most notable is their first son, William Penn (1644-1718), the founder of the Pennsylvania colony. (Historical Society of Pennsylvania)

The rise of “Jacksonian democracy” in the late 1820s spurred the socially elite of Philadelphia and elsewhere to pursue their genealogy, if for no other purpose than to prove that bloodlines created an American “aristocracy” entitled to the benefits of rank. Historian François Weil named this phenomenon “patrician genealogy.” American genealogical research started principally in New England, where systematic research undertaken by antiquarians and amateur genealogists led to the establishment of the New England Historic Genealogical Society in 1845.

Philadelphians had few resources to aid the study and publication of genealogy before the Centennial of 1876. The Historical Society of Pennsylvania, established in 1824, purchased some genealogical texts, and an active “genealogical department” reported on its activities. The Pennsylvania Magazine of History and Biography, first appearing in 1877, devoted some space to the transcription of documents of genealogical import. The Centennial inspired investigation into many facets of American history and the publication of county histories with biographical sketches of leading citizens and their antecedents. 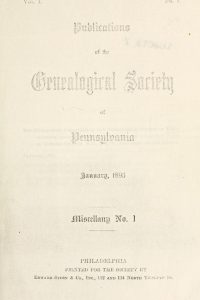 Early in the twentieth century, genealogists recognized the importance of preserving tombstone inscriptions and paper records. Weathering of early tombstones and closure of many old cemeteries resulted in the loss of information of genealogical value. The Genealogical Society of Pennsylvania worked to copy cemetery records and publish tombstone inscriptions. New Jersey “tombstone hounds” collaborated to found the Genealogical Society of New Jersey in 1921 dedicated to the preservation of New Jersey family history.

The standards of genealogical research improved throughout the twentieth century with the increasing availability of primary source documents. Lineage societies tightened the genealogical process, requiring that submitted lineages be reviewed by an independent genealogist along with documentation for every event.

Although amateur genealogy in the early twentieth century primarily centered on a desire to connect one’s lineage to someone notable, some genealogists became interested in achieving something more extensive by the late 1940s and early 1950s. Correspondence with potential family members formed the basis of their initial research, followed by searches of original records found in historical societies and archives to confirm the oral traditions. The Genealogical Society of Pennsylvania changed the format of its publication, which it retitled in 1948 as Pennsylvania Genealogical Magazine, to offer a forum for area genealogists.

As historical societies throughout the Delaware Valley served increasing numbers of genealogical researchers, their professional staffs sought to improve access to their records with genealogists in mind. The formation of new archives, including the Philadelphia City Archives (1952) and county archives in Chester (1982), Montgomery (ca. 1980s), and Delaware (2003) Counties, opened local access to thousands of records with genealogical potential, including deeds, naturalizations, and vital records. Both the National Archives and the Church of Jesus Christ of Latter-day Saints (the Mormons) created regional centers in the Delaware Valley for researchers and genealogists in the 1960s.

The full shift in genealogical thought and practice from nineteenth-century elitism to a democratic acknowledgment of the place of one’s personal ancestors in history followed both the Bicentennial celebrations of 1974–76, which in Philadelphia not only increased patriotic fever but also emphasized the ethnic origins of Americans, and the broadcast of the TV series Roots in 1977. Researchers recognized that their ancestors witnessed and participated in events found in history books. Finding that sense of place helped personalize history for the researcher.

From Shoeboxes to Digital Archives 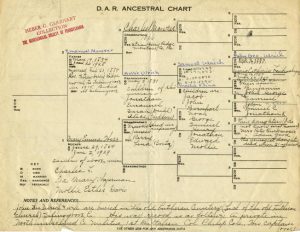 By the twenty-first century, the advent of computer technology and the Internet increased access to many records once lost in the boxes and vaults of archives throughout the world. Initially led by the Genealogical Society of Utah (the genealogical arm of the Mormon Church, which developed the free website familysearch.org), for-profit firms including Ancestry.com and Fold3.com delved into various archives and historical societies to digitize records of genealogical value. This proved a double-edged sword: the digitization of the records fulfilled archivists’ desire for preservation but resulted in a decline in visitors to sites where they could benefit from archivists’ insight and expertise in interpreting these records.

The Internet also provided a forum for many genealogists to connect families, share research, and assist in the creation of online tools. FamilySearch.org welcomed and trained individuals to transcribe and index their holdings. FindAGrave.com and BillionGraves.com are two sites that have relied heavily on the efforts of local volunteers. Their work has resulted in the publication of the location of millions of graves found in thousands of cemeteries throughout the United States.

The search for ancestral roots spurred creation of many free and for-profit genealogical websites. Genealogists’ desire to locate and organize records has led to a greater understanding of American history and citizenship from a local and personal perspective: their research has greatly assisted the work of other historians in finding and piecing together the fabric of American culture.

Jefferson M. Moak is a professional archivist, historian, and genealogist. He has worked at the Map Collection of the Free Library of Philadelphia, Philadelphia ’76 Inc., the Philadelphia Historical Commission, the Philadelphia City Archives, the National Archives at Philadelphia, and the Independence Seaport Museum. He has undertaken extensive research into the architectural, cartographic, and neighborhood histories of Philadelphia. He has served on the board of the Genealogical Society of Pennsylvania and works as verifying genealogist for several lineage societies in the Delaware Valley.

Society of Mayflower Descendants in the Commonwealth of Pennsylvania. Historical Sketch, 1896–1956. Philadelphia: n.p., 1956.