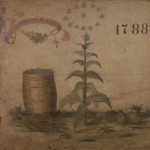 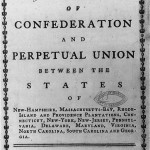 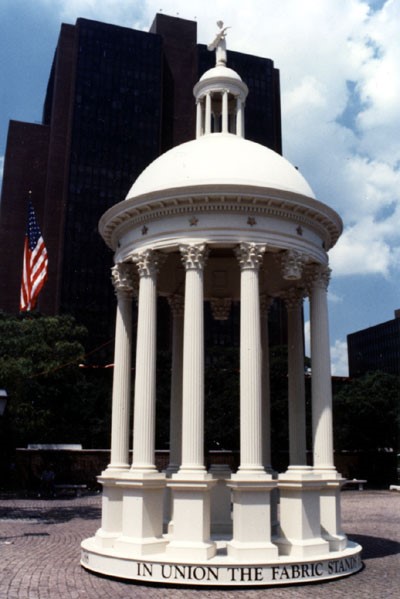 
The "grand federal edifice," pictured in replica here, was designed by artist and naturalist Charles Willson Peale, who also played a key role in planning the route of the parade, providing costume advice, and devising slogans for each of the groups participating in the procession. The Carpenters' Company built the edifice, which was patterned after a neoclassical temple. Standing thirty-six-feet high and supported by thirteen columns, one for each of the new states, the edifice symbolized the Federalist ideal of an elevated center raised by and over the people. 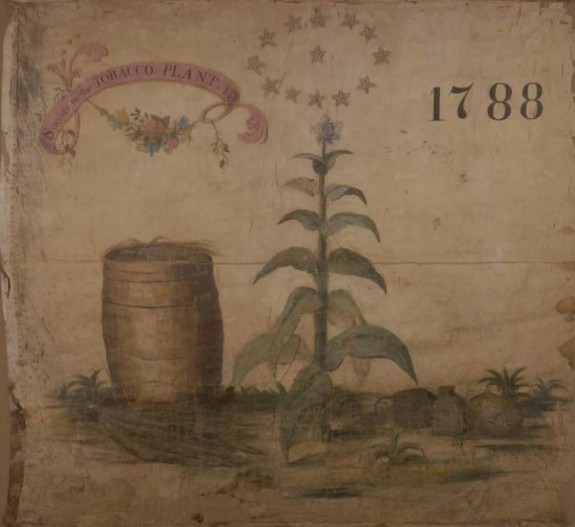 The Tobacconist Banner at the Grand Federal Procession

This silk banner was carried by Thomas Leiper for the Tobacconists of Philadelphia in the Grand Federal Procession. On the banner are painted the design of a tobacco plant bottle and bladder of snuff, thirteen stars, and a tobacco barrel beneath a pink ribbon which reads, “Success to the Tobacco Plant” and the date, “1788.” The procession aimed, in part, to express an expectation shared by urban artisans and merchant-capitalists alike that the Constitution would revive trade by stabilizing government finance. 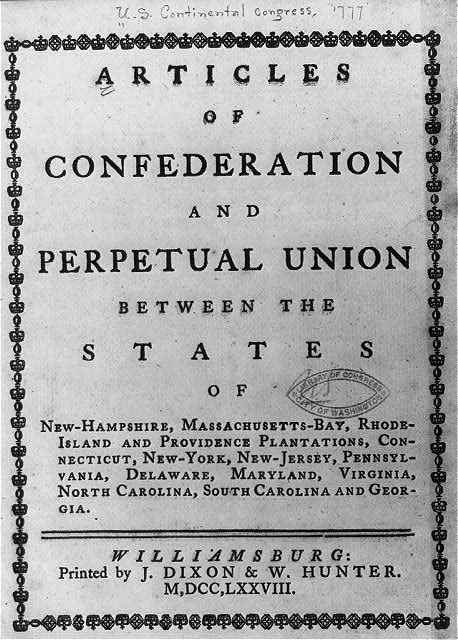 This document was not fully embraced by many of those who marched in the Grand Federal Procession.

Based on the ideas of Benjamin Franklin’s initial proposal for colonial union, the document that would become known as the Articles of Confederation went through sixteen revisions by Congress. It was completed in November 1777 and sent to the states for ratification a few days after its completion. The document would not be ratified until March 1, 1781.

The federal processions of 1788, of which the one in Philadelphia on July 4 was the grandest, communicated an expectation shared by urban artisans and merchant-capitalists alike that the Constitution would “lift all boats” by reviving trade and stabilizing financial instruments (such as debt financing and banking) degraded by a lethargic economy under the Articles of Confederation. 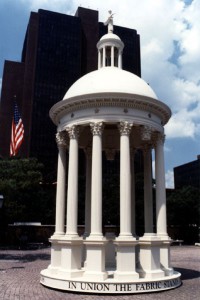 The “grand federal edifice,” pictured in replica here, was the work of artist and naturalist Charles Willson Peale, who also played a key role in planning the route of the parade, providing costume advice, and devising slogans for each of the groups participating in the procession. (USHistory.org) 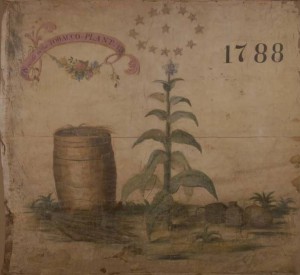 This silk banner was carried by Thomas Leiper for the Tobacconists of Philadelphia in the Grand Federal Procession. (Library Company of Philadelphia)

The majority of craftsmen walked in the street.  Journeymen and apprentice rope makers followed masters with spinning tools (“clouts”) in hand.  Coach painters carried palettes. Bricklayers marched with trowels, their flag representing a “Federal city rising” beneath a rising sun, with the motto “both buildings and rulers are the works of our hands.” Three hundred shoemakers in white aprons walked with a horse-drawn shop with six men making shoes. Hundreds of blacksmiths, tinsmiths, and nailers accompanied a working forge, drawn by nine horses, where they turned “old swords” into “plough-irons,” forged pliers, and sold nails along the route. Their motto: “By hammer in hand, all arts do stand.”

Laura Rigal is Associate Professor in the Departments of English and American Studies at the University of Iowa.  She is the author of The American Manufactory: Art, Labor, and the World of Things in the Early Republic (Princeton University Press, 1998).

Durang, John.  The Memoir of John Durang, American Actor, 1785-1816.  Pittsburgh: University of Pittsburgh Press, for the Historical Society of York County and the American Society for Theater Research, 1966.

Heideking, Jurgen, “The Federal Processions of 1788 and the Origins of American Civil Religion.” Soundings: An Interdisciplinary Journal LXXVII (1994): 367-87.