As a cause for commemoration, the signing of the U.S. Constitution historically has struggled to compete with the Declaration of Independence for national recognition and ardor.  In contrast to the dramatic act of independence, the framing of the national government is a more sober and complex narrative not easily celebrated with barbecues and fireworks. In Philadelphia, the site of the Constitutional Convention, commemoration of the document’s major anniversaries also has been complex and has reflected how regard for the Constitution and its connections to the city have evolved over time.

For Philadelphia and the nation, the Constitution’s major anniversaries often occurred in times of conflict that notably inspired and informed the celebrations. While the Golden Jubilee in 1837 passed largely unobserved, September 17, the date on which the Convention signed the Constitution, was recognized occasionally throughout the early 1800s. Such commemorations often served political purposes; in the 1850s, for example, Philadelphia’s Democratic Party staged commemorations as a counterpoint to the anti-immigrant nativist politicians who dominated city government. Similar tributes also cropped up during the strife of the Civil War.

In contrast to these limited observances, the Constitution’s 100th anniversary in 1887 was treated as an opportunity to demonstrate national progress in a three-day spectacle reminiscent of the 1876 Centennial International Exhibition. A lack of Congressional interest and funding effectively ceded responsibility for the festivities to Philadelphia, which organizers styled the “Mecca of America,” much to the chagrin of rival cities such as New York. In an era of rising immigration and agitation from groups including laborers, suffragettes, and African Americans, proclamations of national unity and reverence for the storied Revolutionary past dominated the proceedings, which began on September 15 with a Civic and Industrial Procession on Broad Street. The procession featured 21,029 representatives from the city’s trade and commercial organizations, as well as 2,106 musicians and 497 massive floats depicting key moments in American history. A military parade, the largest in the nation’s history, followed the next day and celebrations concluded on September 17 at Independence Square. Attended by President Grover Cleveland (1837-1908), the ceremonies included a Marine band led by John Philip Sousa (1854-1932) and speeches that venerated Constitutional principles while overlooking any conflict regarding the document’s drafting and ratification.

Approximately 500,000 visitors and one million local residents observed the Centennial proceedings, which emphasized mass participation even though the contributions of African Americans, women, and ethnic groups were largely scripted or overlooked. Despite resistance from Black and tribal leaders, participation by both African Americans and American Indians was limited to a series of “object-lessons” that celebrated progress towards the Anglo-Saxon ideal. The Carlisle Industrial Indian School, which removed Indian youth from reservations and sought to assimilate them into American society, was a centerpiece of the Civic and Industrial Procession, and a series of floats glorified the African American journey from slavery to emancipation. In both instances, organizers downplayed social conflict and stressed national harmony and unity, themes echoed in the Sesquicentennial celebrations fifty years later.

Amidst the tumult of the Great Depression, anxiety about the strength and endurance of national principles colored the Constitution’s 150th anniversary, and the festivities captured a prevailing nostalgia for early American traditions and culture. Compared to the Centennial, the 1937 commemoration was a more national affair that, in the wake of the New Deal, reflected the federal government’s activist role in national life. Under the leadership of Congressman Sol Bloom (1870-1949), the U.S. Constitution Sesquicentennial Commission gave scant attention to Philadelphia, choosing to highlight the Constitution’s history and meaning rather than the place it was crafted. Centered in Washington, D.C., festivities were to begin on September 17, 1937, with commemorations of key dates and events following throughout the country until April 30, 1939, the anniversary of President Washington’s inauguration.

To the Commission’s dismay, Philadelphia disregarded the national plan and began its festivities on May 14, the date the Constitutional Convention convened in the city. The proceedings commenced at Independence Hall, where teachers gathered dressed as the fifty-five delegates and Mayor S. Davis Wilson (1881-1939) struck the Liberty Bell thirteen times with a wooden gavel made from a tree at Valley Forge. Over the next four months, local interest and pride in Philadelphia’s Constitutional legacy was evident in festivities staged throughout the city, including a Mummers parade on the Benjamin Franklin Parkway and a water carnival on the Schuylkill featuring speedboat races, fireworks, and a floating reenactment of the signing of the Constitution. The Pennsylvania Constitution Commemoration Committee also organized school programs and essay contests that stressed Independence Hall’s connection to the Constitution, a bond reinforced by ceremonies held there on June 20, 1938, to mark Pennsylvania’s ratification of the document.

Like the Sesquicentennial, the Constitution’s Bicentennial anniversary in 1987 was also a nationwide, ongoing celebration in which Philadelphia’s festivities were one among many.  Once again, a lack of national planning and funding plagued the proceedings, which nonetheless featured a calendar of observances that built momentum to the Bicentennial itself.  In Philadelphia, the coordinating committee “We the People-200” identified key themes for programming, including the Constitution’s evolution, Philadelphia’s legacy as the first national city, and the growth of the nation.  Through exhibitions, tours, and historic dramas, organizers sought to underscore how historic sites like Independence Hall and the Second Bank of the United States created an enduring connection between Philadelphia and Constitutional history.

Philadelphia’s Bicentennial celebrations officially commenced on Memorial Day weekend 1987 with a festival of events titled “All Roads Lead to Philadelphia.”  At Independence Hall, descendants of the Constitution’s signers greeted representatives from the original thirteen states and attendees included Vice President George H.W. Bush (1924-2018), Chief Justice Warren Burger (1907-1995), and Pennsylvania Governor Bob Casey (1932-2000).  Commemorations continued throughout the summer, and on September 17 President Ronald Reagan (1911-2004) addressed the nation from Independence Hall following a re-enactment of the 1788 Grand Federal Procession celebrating ratification.  The parade, which marched to the Philadelphia Museum of Art, also included a 40-foot float modeled after a parchment scroll.  A massive public picnic and fireworks at Penn’s Landing concluded the day’s events.

Hillary S. Kativa received her B.A. in History and English from Dickinson College ’05 and her M.A. in History from Villanova University ’08.  Her research interests include American political history and presidential campaigns, public history, and digital humanities. (Author information current at time of publication.) 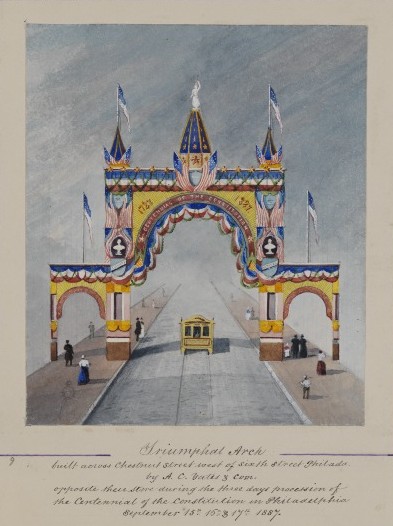 A Triumphal Arch spanned Chestnut Street west of Sixth Street for celebration of the Constitution's centennial in September 1887. The arch was built by A.C Yates and Company and stood opposite the company's store during the three days of celebration on September 15, 16, and 17, 1887. (David J. Kennedy Watercolors Collection) 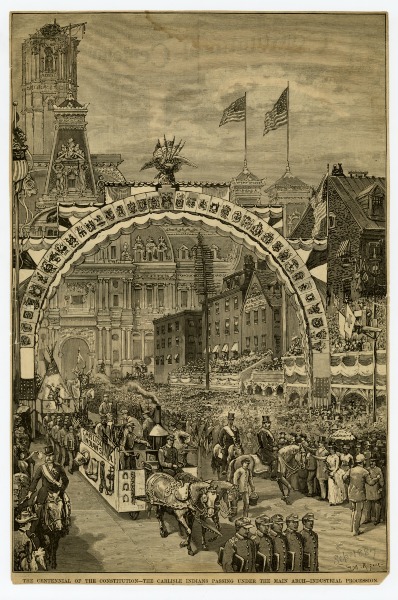 The Constitution Centennial proceedings were observed by approximately 500,000 visitors and one million local residents. Although emphasizing mass participation, the contributions of African Americans, women, and ethnic groups were largely scripted or overlooked. Despite resistance from black and tribal leaders, participation by both African Americans and American Indians was limited to a series of “object-lessons” that celebrated progress towards the Anglo-Saxon ideal. The Carlisle Industrial Indian School, which removed Indian youth from reservations and sought to assimilate them into American society, was a centerpiece of the Civic and Industrial Procession, and a series of floats glorified the African American journey from slavery to emancipation. In both instances, organizers downplayed social conflict and stressed national harmony and unity, themes echoed in the Sesquicentennial celebrations fifty years later. This depiction of the 1887 industrial procession features the Carlisle Indian School on Broad Street, with City Hall -- then under construction -- in the background. 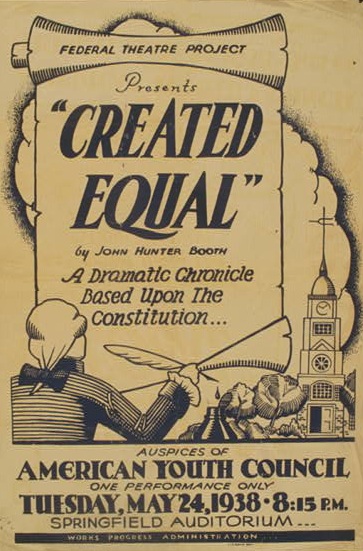 Productions such as "Created Equal," staged in Springfield, Illinois, in 1938, called attention to Philadelphia's place in history. The poster for the drama, presented by the Federal Theater Project of the WPA, portrayed Philadelphia as an eighteenth-century place represented by Independence Hall and a wigged signer of the Constitution. 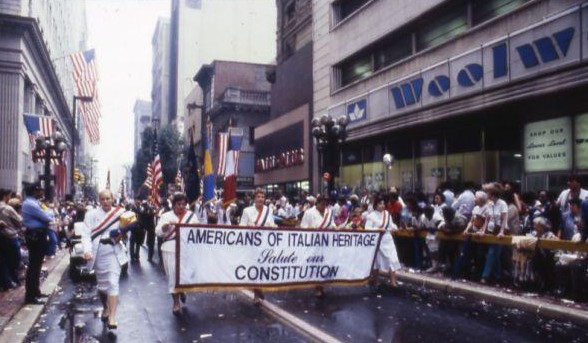 Parading for the Constitution, 1987

Celebrating personal heritage as well as the anniversary of the Constitution in 1987, Americans of Italian Heritage march on Chestnut Street. Compared with previous commemorations, nationality groups gained a greater role in the 200th anniversary. 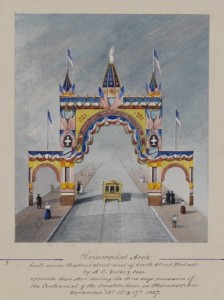 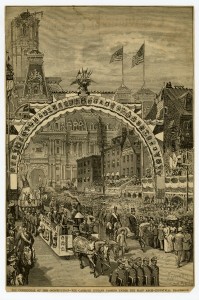 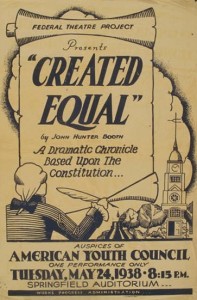 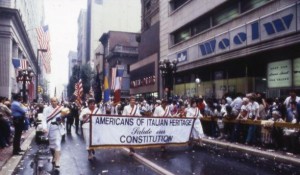 Kammen, Michael.  A Machine that Would Go of Itself: The Constitution in American Culture. New York: Alfred A. Knopf, 1986.